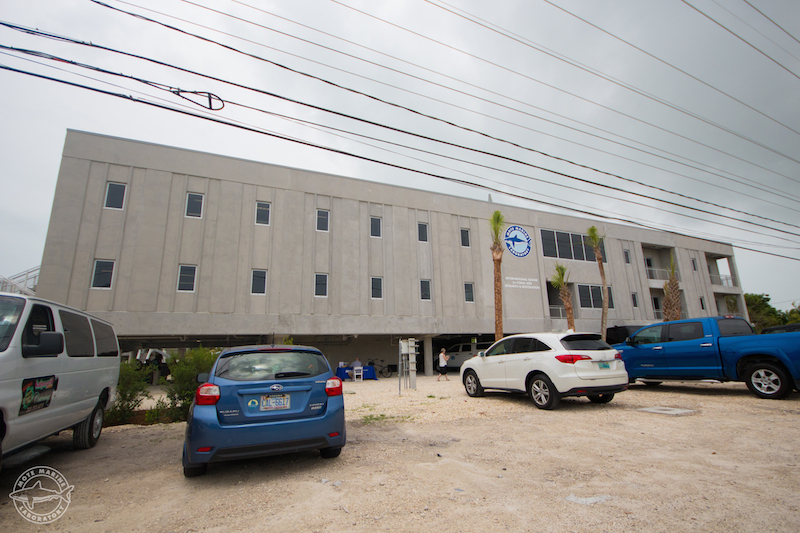 This morning, approximately 100 people including Mote scientists, trustees, supporters and community leaders attended an invitation-only ribbon cutting and open house where they got the first glimpse inside the new 19,000-square-foot facility. The building more than doubles Mote’s previous space for coral research and restoration efforts and provides an enhanced base of operations for collaborating scientists from around the world.

“Today really is a monumental day for coral reef research and restoration,” said Dr. Michael P. Crosby, Mote President & CEO. “Today marks the beginning of an era, a time when not only Mote scientists, but international and national visiting scientists can come to this building and continue to revolutionize the way we restore our coral reefs in our lifetime.”

During the ribbon-cutting ceremony, Mote leaders announced that the new facility is now named the Elizabeth Moore International Center for Coral Reef Research & Restoration (IC2R3). Elizabeth Moore, one of the first lead donors to the facility, dramatically increased her support for the facility in spring 2017.

“Coral reefs are a source of wonder, prosperity and thriving biodiversity — I know it, my family knows it, Mote scientists know it, and together we aim to keep it that way,” Moore said. “Mote scientists are working to restore reefs, using science-based strategies that take into account global challenges such as climate change, and they are forging international partnerships so their innovations can benefit reefs far and wide. It is an honor to support Mote’s work that is creating positive impacts around the world, and I hope others will be motivated to get involved.”

Moore and other generous donors (listed below) have covered a majority of costs for the facility’s $7 million construction and initial installations of scientific infrastructure, and Mote continues to welcome support for the facility’s planned growth.

“When I first arrived at Mote in 2010, the vision for new 21st Century research infrastructure on our Summerland Key campus was clear to me: We needed to expand to achieve the potential for truly significant impact of our innovative coral reef restoration research here in the Florida Keys and around the world,” Crosby said. “As we achieve this vision, as an integral part of this community, we are genuinely humbled by the incredible generosity of all those who champion our dream and mission. In particular, we’re exceedingly grateful to Elizabeth, who has been inspirational with her support and passion for the marine environment from the beginning. The Elizabeth Moore International Center for Coral Reef Research & Restoration is a major base of operations and a launching platform for global coral reef restoration that can be achieved in a decade or two, not centuries. We now envision self-sustaining ‘rainforests of the sea’ once again within our lifetime, for our children’s future and beyond.”

The new building also includes the Alfred Goldstein Institute for Climate Change Studies, thanks to a generous donation from the Alfred and Ann Goldstein Foundation, which supports the building’s infrastructure and the supporting studies on the impacts of climate change on coral reef ecosystems and restoration.

"As a longtime supporter of Mote, I am excited to support this new facility and the related research that will enhance Mote's international presence and reputation,” Dr. Al Goldstein said. “The impact of the research housed at this institute will make a profound difference not only in the Florida Keys but around the world.”

John LaCivita, Vice President at Willis A. Smith Construction, Inc. (the Sarasota-Based company handling the demolition and construction), attended the ribbon cutting to celebrate the finished and fully functional facility.

“Through my involvement as the project executive for this one-of-a-kind coral research facility for Mote, I have gained an important understanding of the significance of our world’s coral,” LaCivita said. “This new facility was well-designed and constructed to last for many decades.  I know that many great discoveries will be made in the labs that we constructed. On behalf of Willis Smith Construction, I want to recognize our design team and our construction team of Katie Kominos PM, and Eric Deinlein Superintendent. I also want to thank Eric’s family who worked selflessly as a team to allow Eric the time away from them to make this project a true success.”

“The building itself is strong, sustainable, modern, and set in one of the best locations in the world for coral research. This will hopefully attract scientists from around the world to do research in such an amazing facility in this unique location.”

Also in attendance was Representative Holly Raschein of the Florida House of Representatives. Raschein, whose Congressional District 120 covers south Miami-Dade County through the Florida Keys, went diving in Mote’s coral restoration nursery in 2014 and said she recognizes the value of restoring reefs in her home waters.

“Mote Marine Laboratory is the epitome of where our state and nation needs to be going in terms of coral reef restoration,” Raschein said. “We are here in the Florida Keys in South Florida, where we are home to the third largest coral reef tract in the world and being a boater and scuba diver in this community, I know we are seeing first hand the effects of coral die off and Mote is just an amazing leader in these efforts. This new facility is going to allow for these scientists to have the foundation to keep these research efforts going and will allow other scientists from around the globe to come and share their findings and to collaborate and to hone in on solutions to rebuild our reefs.”

“I couldn’t be more excited that this building is now officially open to scientists,” said Dr. David Vaughan, Executive Director of IC2R3. “Now we have a greater capability to share the innovative technology developed here at Mote with other talented scientists throughout the world. This new level of collaboration will allow us to propagate even the most challenging massive corals in large numbers in just a few years and share how we do this with the rest of the world. It’s about time we share the ‘good news’ about our coral reefs and our oceans, locally and globally.”

Coral reefs are nicknamed “rainforests of the sea” because they support about 25 percent of marine life on Earth and provide $6.3 billion to Florida’s economy. However, some areas of Florida and the Caribbean have lost 50-80 percent of coral cover in the last three decades, and reefs have declined worldwide.

Mote scientists and their partners are elucidating strategies to stem coral declines and working to implement significant restoration, based on Mote’s innovative coral restoration technologies. For example, Mote scientists have: restored more than 20,000 corals to Florida’s reefs; developed a special restoration process to speed the recovery of slow-growing coral species; assessed multiple threats to corals and their interactions, including warming temperatures expected with climate change, ocean acidification and coral disease; and studied the impacts of potentially concerning organic compounds found in pesticides, plastics and other human-contributed sources.

Historically, Mote’s Summerland Key campus has hosted and supported the work of more than 150 scientists from 60 institutions around the world per year — including researchers with approximately $63 million in National Science Foundation grants since 2004. Mote’s IC2R3 now allows this number of scientists and students, and their vital impact, to grow significantly. For example, it will benefit a collaboration forged in 2016 by Mote and The Nature Conservancy geared toward long-term reef restoration at unprecedented scales in Florida and the Caribbean.

The new IC2R3 construction, outfitting, and scientific infrastructure value about $7 million total. All support to-date has come from philanthropic giving. The following supporters have made major contributions toward Mote’s IC2R3 facility and its mission: