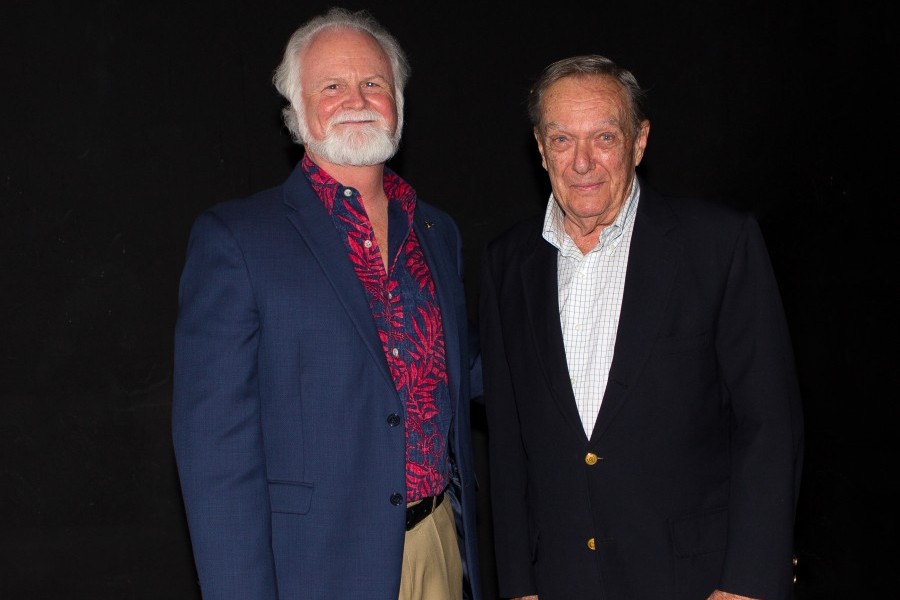 During the ceremony, which filled Mote’s WAVE Center auditorium near capacity, Crosby praised volunteers for bringing Mote’s mission to life.

“The success of Mote depends on the support of the community and its volunteers,” Crosby said. “It is humbling to see so many volunteers who are dedicated and loyal to helping Mote achieve its mission of educating the public of the world class research that happens right here in Sarasota and how the public can become better stewards of the marine environment.”

Dwight Davis was honored for 30 years of service. As an Aquarium docent, Davis has shared his passion for the ocean and educated visitors from around the world about Mote’s research and conservation efforts.

Davis grew up in Florida, first in Tampa, then on Hollywood beach where he became an avid fisherman. After retiring from the advertising business and moving to Sarasota in 1986, Davis heard about Mote from a neighbor, a long time resident of Sarasota and friend of Mote’s Founding Director Dr. Genie Clark, and he quickly became a Mote volunteer.

One of Davis’ most cherished memories as a Mote volunteer is when he authored the book titled "Marine Scene,” a selection of articles written for the Longboat Observer over 14 years and illustrated by the late Virginia Sanders.  It is still for sale in the Aquarium Gift Shop.

“Being a volunteer was never work,” Davis said. “Every activity – Aquarium guide, lab tours, President of the Volunteers of Mote Marine Laboratory, member of the Speakers Bureau, writer of leaflets and donor testimonials for Mote Development, and still more kept me busy. And Mote staff scientists have always kept an open door to help educate me. I never lost interest in marine life, and in fact have gained knowledge over time.”

Another volunteer, Carl Benninghoff, also served 30 years at Mote. Carl passed away shortly before the awards ceremony, but his wife, who is also a Mote volunteer, Roberta Benninghoff, accepted the award on his behalf.

“I was away up north while my twins granddaughters were being born,” Roberta said. “While I was gone, Carl got into things on his own and one of the things he got into was Mote. He loved it right away. He always loved studying things and learning things. He loved learning about all the fish, all the Aquarium animals and all the research that is done through Mote.”

Many volunteers recalled that on almost every Thursdays during the volunteer briefing sessions, Carl would have a pen and paper and he’d be writing down notes the entire time.

“He just really liked being here. It made him happy and when he couldn’t be here, he was unhappy,” Roberta said.

“Carl, like so many of our volunteers, made such an incredible impact on Mote,” said Aly Busse, Assistant Vice President for Education at Mote. “His heart, dedication, enthusiasm and true passion for sharing Mote’s mission were all contagious. He will be missed.” Roberta said.

During the awards ceremony, many other volunteers were inducted into Mote’s Volunteer Emeritus Program, which allows volunteers with a minimum of 10 years or 1,000 hours of service to be nominated by Mote’s Volunteer Board and approved by Mote’s President & CEO to receive special honors upon their retirement. Emeritus volunteers retain many benefits of their service at Mote — including visiting Mote Aquarium for free and attending certain special events.

“It is a pleasure to work with and coordinate volunteer efforts for Mote,“ Busse said. “It is even more of a pleasure to present these volunteers with an awards ceremony as a small thank you for everything they do for Mote. They truly are the backbone of this organization and I can’t thank them enough.”

To learn more about volunteering at Mote, visit: www.mote.org/support/volunteer.