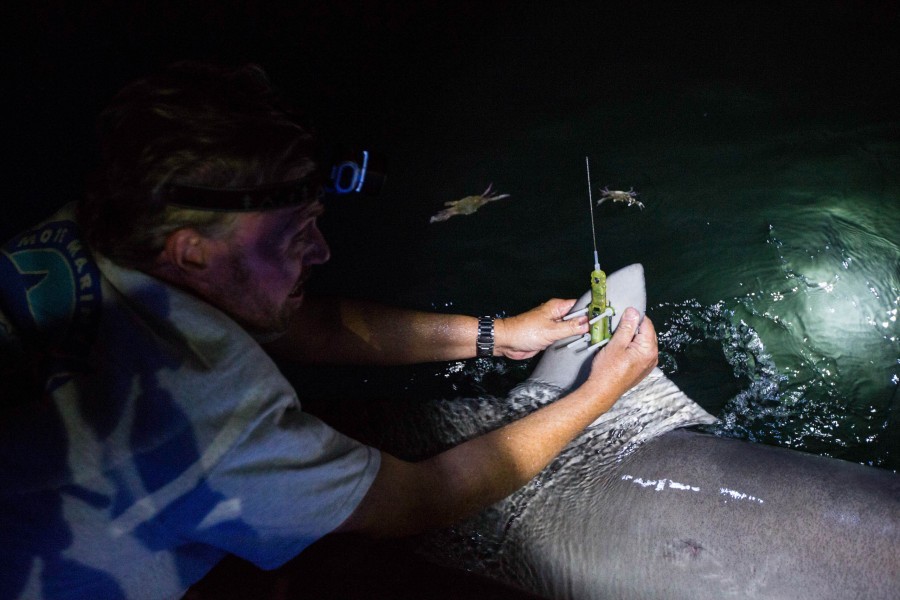 Dr. Bob Hueter applies tag to a bull shark in a 2016 study. Bull sharks will be included in new consortium. Photo: Olivia Raney

Sarasota, Fla. — October 2, 2019 — Mote Marine Laboratory is bringing its long history of shark expertise to a new consortium studying highly migratory species, thanks to new funding from the National Oceanic and Atmospheric Administration (NOAA) Sea Grant program. The Pelagic Ecosystem Research Consortium (PERC) will have a goal of improving stock assessment, management and sustainability of highly migratory species, such as tuna, swordfish and sharks, in the Atlantic Ocean and Gulf of Mexico. PERC is being led by the University of Maine, with partners from Mote Marine Laboratory, Nova Southeastern University and Auburn University.

The PERC award was one of three competitive grants totaling $2 million, awarded through the 2019 Sea Grant Highly Migratory Species Research Initiative. More information about the national initiative is on the NOAA Fisheries website. This new Sea Grant initiative was championed by U.S. Senators Marco Rubio (R-Fla.), Susan Collins (R-Maine) and Richard Shelby (R-Ala.), who together recognized the national need for this research.

PERC will conduct projects in five areas of research focused on bycatch reduction, increased understanding of life history, post-release mortality and other objectives for multiple species of highly migratory fish in the Northwest Atlantic and Gulf of Mexico.

Research by the consortium is expected to fill gaps in information that will reduce uncertainty in stock assessment models and population status, and inform appropriate quotas to promote sustainability. Mote Marine Laboratory’s Center for Shark Research is leading the shark component of PERC’s objectives.

“This vital funding comes at a time when shark issues have come to the forefront, with some species still in decline and others on the rise, and we need to have the best available science to manage our fisheries and inform public policy about sharks,” said Dr. Robert Hueter, Director of Mote’s Center for Shark Research.

“Highly migratory species are some of the most sought after fish in the world, both commercially and recreationally, and yet there is so much to learn about their life history in order to improve the stock assessments that determine their population status, the allocation of fishing quotas and ultimately their sustainability,” said UMaine assistant research professor Dr. Walter Golet in the School of Marine Resources, who is a co-principal investigator on the project with Dr. Hueter of Mote, Dr. David Kerstetter of Nova Southeastern University, and Dr. Stephen Bullard of Auburn University.

In particular, PERC will gather data on:

The total cost of the Mote shark project is $600,000 for one year.  Of this, the NOAA Sea Grant award provides $400,000, with a $200,000 match coming from Mote and its partner organization OCEARCH, which is providing $75,000 in vital ship time aboard its state-of-the-art shark research vessel.