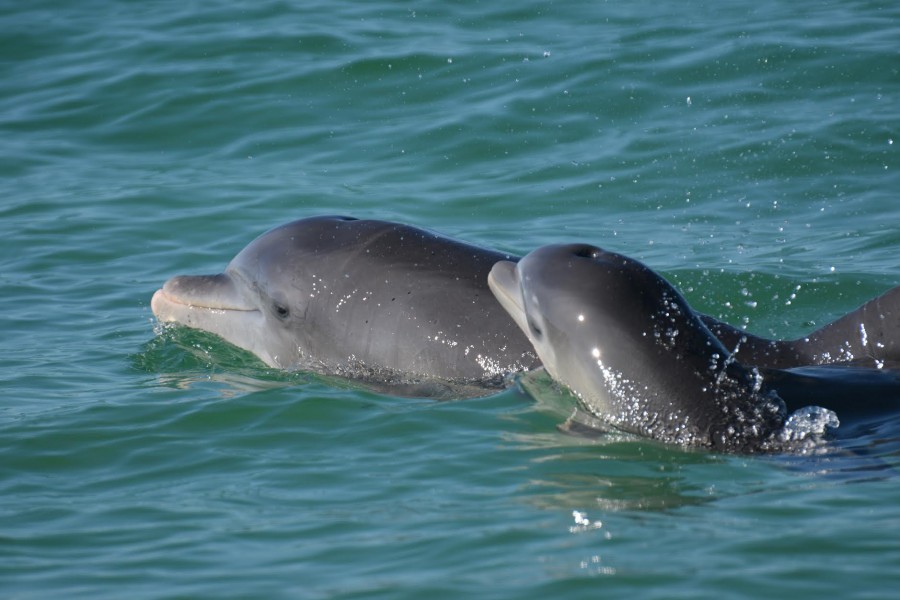 “Ginger,” a Sarasota Bay resident bottlenose dolphin rehabilitated at Mote Marine Laboratory, was observed with a newborn calf on July 6 by the Sarasota Dolphin Research Program (SDRP), a Chicago Zoological Society program in collaboration with Mote. SDRP has monitored Ginger since her birth in 2005 to a well-known resident Sarasota Bay dolphin.

Ginger stranded at age 3 in December 2008 on Siesta Beach and was brought to Mote’s Dolphin & Whale Hospital, which is dedicated to rehabilitating and releasing sick and injured dolphins and small whales. Ginger was dehydrated and covered with toothrake marks from interactions with other dolphins, and she appeared to be suffering from a respiratory condition called bronchopneumonia. All hospitalized dolphins require plenty of care, but Ginger stood out because she was fed primarily live fish during her time at Mote, with the intent of helping her to stay as wild as possible and be ready for release.

“While Ginger was in our care, trained Mote volunteers spent 1,320 hours monitoring her condition, providing vital information about her progress,” said Lynne Byrd, Medical Care and Rehabilitation Coordinator at Mote. “Ginger ate nearly 4,000 pinfish during her rehabilitation. She was one of the most labor intensive patients that I've had the privilege to work with, and it was obviously well worth our effort!”

Ginger recovered successfully and was released in February 2009 wearing a tiny VHF radio transmitter so she could be easily found and visually monitored by SDRP, which has studied Sarasota Bay’s dolphins since 1970 and conducts the world’s longest-running study of a wild dolphin population.

“From the time Ginger was released, she has demonstrated her ability to reintegrate into the local, multi-decadal, multi-generational resident dolphin community and engage in normal dolphin activities,” said Dr. Randall Wells, Director of SDRP, who led Mote’s efforts to create the dolphin hospital in the early 1990s.

This is Ginger’s second calf. Ginger had her first calf in summer 2015, but it disappeared within approximately six months. Loss of first-born calves is not unusual, in dolphins or many other mammals.

The sighting of Ginger with her new calf drives home that she has been thriving as a member of the resident dolphin community in Sarasota Bay. “Successful reproduction is a very good indication of successful treatment in rehab,” Wells said.

Watch out for marine life while enjoying southwest Florida waters.

Up to five concurrent generations of long-term resident dolphins live in Sarasota Bay year-round, and they give birth during late spring and summer. To date in 2017, 18 new babies have been born to well-known mothers using Sarasota Bay and surrounding waters. Dolphins do not, or cannot always get out of the way of approaching boats, and fatal collisions and serious injuries to dolphins occur in Sarasota Bay. The dolphins frequent shallow waters where they may be unable to dive below an approaching boat. Naïve newborn dolphins lack the skills and experience to avoid boats, and have to surface more frequently to breathe than do older dolphins. The National Oceanic and Atmospheric Administration’s guidelines indicate that boats should stay at least 50 yards away from dolphins.