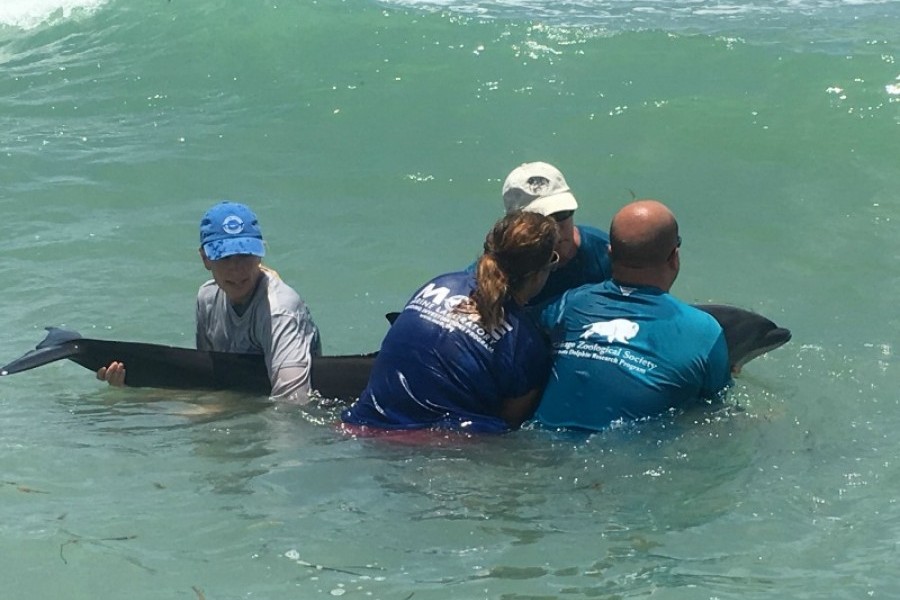 Mote’s Stranding Investigations Program staff arrived on scene at approximately 1:00 p.m., and was assisted by the Sarasota Dolphin Research Program (SDRP), a Chicago Zoological Society Program in collaboration with Mote, and the Florida Fish and Wildlife Conservation Commission (FWC). The majority of the dolphins had already been pushed back to the sea by beachgoers, and they were milling in a tight group in choppy waters several hundred yards offshore.

An 81-inch-long, 158 pound male did not rejoin the rest of the group despite an attempt by responders to send it back. It was examined by Mote’s staff veterinarian, Dr. Adrienne Atkins, on site, and following discussion with NOAA’s National Marine Fisheries Service, it was determined that the most humane decision was to euthanize the dolphin based on the species and the multiple re-strandings.  Initial findings from a necropsy (animal autopsy) were inconclusive with regards to cause of death.  Tissue analyses may provide insight when results become available in several weeks, but not every stranding has a cause that can be determined.

The remainder of the group moved offshore and out of sight.  Late in the afternoon, two more dolphins were reported to have come ashore off Caspersen Beach in Venice.  They were pushed offshore before FWC and SDRP responders arrived.

Fraser’s dolphins are deep-water animals that do not occur normally in Sarasota coastal waters.

Mote Marine Laboratory’s Stranding Investigations Program responds 24 hours a day, seven days a week, to reports of sick, injured and dead marine mammals and sea turtles in Sarasota and Manatee county waters. Mote is a member of the National Marine Mammal Stranding Network overseen by NOAA’s National Marine Fisheries Service, the federal agency that oversees wild dolphins in the U.S. Live animals are evaluated, and if they are good candidates for rehabilitation are admitted into  Mote’s Dolphin and Whale Hospital or Sea Turtle Rehabilitation Hospital for treatment.  If the animal is already deceased or not a good candidate for rehab, they undergo a detailed post-mortem examination so that we may learn more about the natural history of these animals and evaluate long-term trends in mortality.

Mote is grateful for the partnership of city, county and state law enforcement and wildlife officials in assisting with responses to stranded marine animals.

Beachgoers who see stranded marine mammals should NOT push the animals back out to sea. Marine mammals that strand are often sick or injured and an assessment should be conducted by trained professionals prior to release. They should be stabilized on the beach until trained and legally authorized responders arrive.  Please contact trained wildlife responders immediately (details below) and follow these best practices.

Within Sarasota or Manatee county waters, if you see a stranded or dead dolphin, whale or sea turtle, please call Mote's Stranding Investigations Program, a 24-hour response service, at 888-345-2335 and wait for further instructions.

If you see a stranded or dead manatee anywhere in state waters or a stranded or dead dolphin, whale or sea turtle outside of Sarasota or Manatee counties, please call the FWC Wildlife Alert hotline at 1 (888) 404-FWCC (3922). You can also use the smartphone app Dolphin and Whale 911 from NOAA Fisheries.