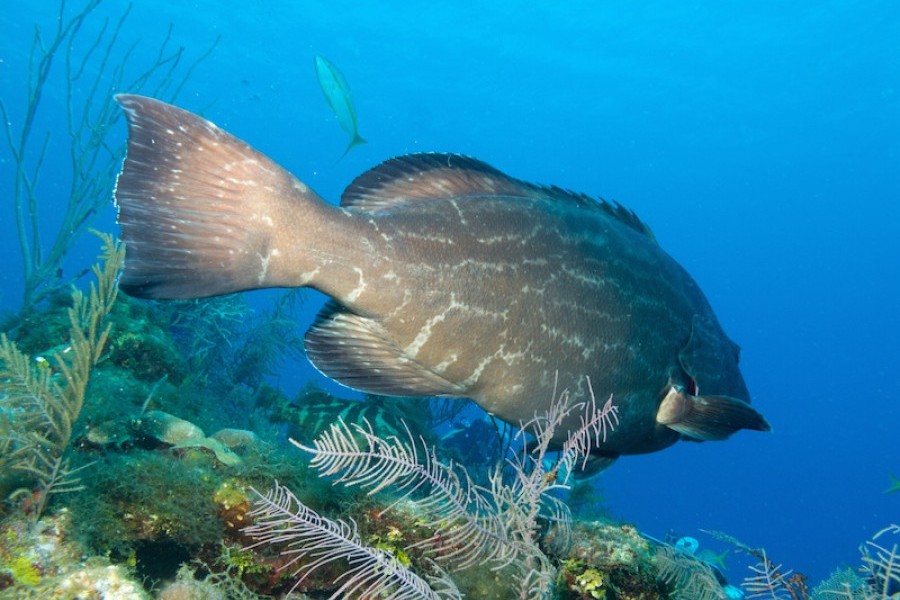 The spawning site called Riley’s Hump is located in the Tortugas South Ecological Reserve, a research-only marine reserve in the Florida Keys. Riley’s Hump is a documented spawning site for mutton snapper, and now research by Locascio and partners indicates that it is used for reproductive purposes by three grouper species as well.

The study, funded by a grant from the National Oceanic and Atmospheric Administration (NOAA) Coral Reef Conservation Program, began in April 2010 and ended in June 2012.

“An important result of this study is that this is the first time a black grouper spawning site has been identified in U.S. waters,” Locascio said. “Identifying spawning sites allows us to better understand and protect the spawning stock and habitats that support them. It also provides many additional research opportunities, such as predicting the downstream locations where grouper larvae originating at Riley’s Hump will settle into juvenile habitat which is just as important to protect.”

Acoustic digital recorders were deployed at seven locations on Riley’s Hump for the duration of the study. These locations included three previously established study sites where visual surveys of fishes were conducted during prior years, along with four new sites, including three sites on Riley’s Hump and a site approximately 197 feet (60 meters) deep off the southwestern edge of Riley’s Hump (RHDW).

According to the International Union for Conservation of Nature's Red List of Threatened Species, black grouper is widespread and abundant but is considered "near threatened," as its populations have declined nearly 30 percent are expected to continue declining if current threats remain. The red grouper is also listed as “near threatened” and red hind is listed as “least concern.”

“Because these groupers support large commercial and recreational fisheries, there is an increasing focus on the conservation and management of their stocks and habitats,” Locascio said. “Beyond that, these fish are high-trophic level feeders. There are not many species above them in the reef community food web, and they may help reef ecosystems maintain a healthy balance.”

Riley’s Hump is a protected marine area where scientists can study the fish populations but recreational and commercial fishing are not permitted.

The discovery that at least three grouper species use Riley’s Hump for reproduction further indicate its importance as part of a marine reserve and the need for continued research to understand its significance for the recovery of fish populations in the southeastern U.S.

“My hope is to use the information from this study to learn more about the movement patterns of these three species of groupers,” Locascio said. “If we can identify where they reproduce, where the juveniles live their lives and track the adults back to the same reproductive area, we can learn how to manage this population as a whole. We can use passive acoustics to explore long-term monitoring of habitat use by important sound-producing fish.”