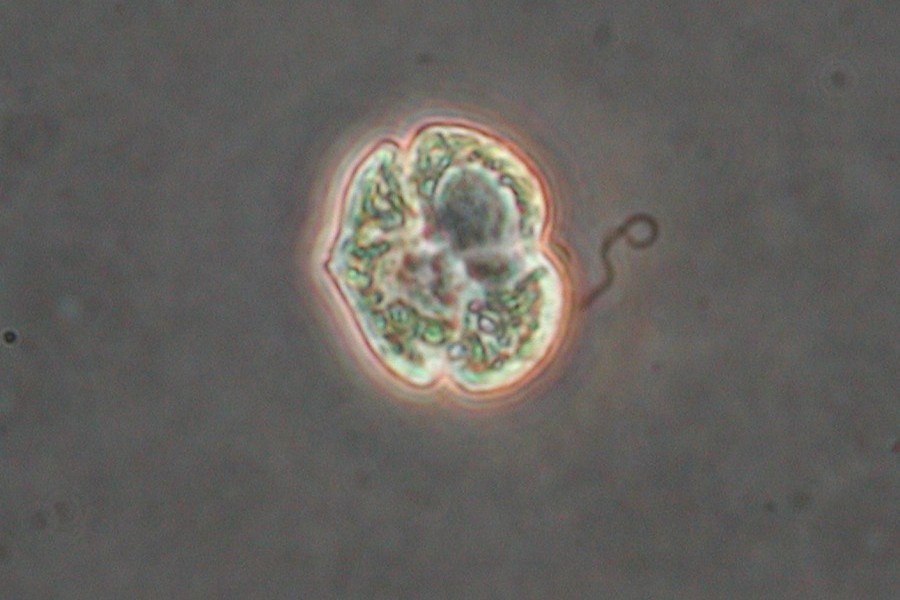 Mote Marine Laboratory scientists are launching a research project this week that will test whether filter-feeding animals and seaweeds can help mitigate the effects of Florida red tide, an algal bloom caused by the naturally occurring microscopic organism Karenia brevis.

Florida red tide can kill fish and marine mammals, and can negatively impact humans by causing respiratory irritation and neurotoxic shellfish poisoning. There is no proven way to eliminate red tide in large areas without harming natural ecosystems, but this study seeks new ways to combat its presence and effects in limited areas.

Mote staff scientists Dr. Vince Lovko and Dr. Tracy Fanara are leading this project as part of continued efforts to reduce red tide impacts on coastal communities. Lovko is studying the inhibitory effects of macro-algae on K. brevis, and now he and Fanara want to investigate whether multiple organisms can potentially bio-filter, or sift out K. brevis cells and the brevetoxins they produce from the water, and consequently lessen their impacts.

Mote scientists and interns are growing these filter-feeding organisms on “living docks,” artificial reef structures that can float under docks and support marine life.

“After a discussion with Dr. Patrick Rice at Florida Keys Community College, who was using these ‘Mini Reefs’ built by Ocean Habitats to improve water clarity in waterways, I thought, ‘since we know shellfish and other aquatic animals that may inhabit these docks accumulate the red tide toxin, we should experiment to determine the effectiveness of these living docks to reduce biotoxins produced by red tide, and therefore, determine the potential for reduction in human health effects in canal communities,” Fanara said.

“Ocean Habitats, a company that commercially produces 'living dock' structures called ‘Mini Reefs,’ has shown cleaner water and successful habitat restoration of canals in Marco Island," Lovko said. "The habitat improvement resulted in the return of numerous fish species to the canals, and even dolphins that would come to feed on the fish. These artificial reefs could be used to potentially filter red tide out of limited volumes of water in a more natural way that does not use chemicals and helps to restore lost habitat.”

Mote’s current research project is beginning with a smaller lab study using structures constructed by Mote’s high school interns. The students placed them into Sarasota Bay, Florida, where the structures attracted colonizing, filter-feeding organisms such as filamentous green algae, barnacles, tunicates, tube worms, oysters and other organisms. In the lab, half of the structures will be left with organisms on them and the other half will be stripped clean. They will all be placed in separate tanks containing K. brevis and tested to compare cell counts of K. brevis between control and filter-feeding tanks to determine the ability of these fouling organisms (life forms that accumulate on underwater surfaces) to remove red tide.

Pending the availability of funding, in fall 2018 the team will expand their study using larger living dock structures designed and constructed by Lovko and his team and currently deployed in Sarasota Bay to accumulate fouling organisms. These structures will be tested for their ability to reduce red tide at a larger scale.

“To my knowledge, a study on using artificial reefs to impede the effects of red tide has not been done,” Fanara said. “The Marco Island situation is similar, but it tested water quality effects in general, and didn’t specifically address the harmful consequences of brevetoxin. Our study is applying an old concept — that filter feeding organisms can improve water quality — in a new way.”

If this project is successful, they want to transform it into a community outreach initiative, teaching people who live along small canals to purchase or build living docks, to potentially alleviate some of the red tide effects experienced by the communities.

“We are hoping to conduct a third community outreach-oriented study on localized waterways such as those in Boca Grande, because the canals are small and we can use them to test the effectiveness of the living docks by comparing water quality and red tide in canals with and without living docks installed,” Lovko said.

This study could spark other beneficial projects. Dr. Richard Pierce, Associate Vice President for Research at Mote, suggested sampling some of the organisms and looking at how their bodies get rid of the toxins they accumulate. Lovko is also interested in studying which specific organisms or combinations of organisms are most effective in filtering out red tide.