Building on data and findings from previously tagged great white sharks, three Mote Marine Laboratory scientists and eight other researchers will embark on another major shark research expedition aboard M/V OCEARCH in the Atlantic Ocean.

Expedition Jacksonville will launch on March 15 and return on April 2. It will start from Jacksonville, Fla., proceed off Florida's northeastern coast, and for the first time in an OCEARCH shark expedition, will reach waters off the southern coast of Georgia.

During these two weeks, scientists from 10 institutions plan to tag, sample and release white sharks with a purpose of gathering data to further understand the ecology, natural history, physiology and behavior of white sharks in the Atlantic Ocean.

Three years ago, on March 3, 2013, another OCEARCH expedition tagged white shark Lydia in Jacksonville. Since then, she has traveled over 35,000 miles and was the first documented white shark to cross the Mid-Atlantic Ridge, demonstrating the connectivity of Florida waters with northeastern Atlantic waters off Europe. The M/V OCEARCH is now returning for its 24th expedition to generate scientific data critical to ocean conservation. These expeditions allows researchers to study shark migration patterns in different parts of the world and helps them uncover areas in need of protection.

Hueter will serve as a principal investigator on the expedition, helping to oversee the dozen or so procedures that are performed on captured white sharks during the 15 minutes that the scientists have access to the animals on the ship. His primary research interest is in the use of satellite tags, devices that are attached to the sharks to track their long-term movements for up to five years. This, he says, helps reveal what habitats and space these animals need to thrive.

“Previous research has indicated that northern Florida and southern Georgia provide important habitat for white sharks, especially in winter months,” Hueter said. “As top predators, sharks play an important role in preserving the balance of ocean ecosystems, but habitat  loss and climate change are two of the issues these animals face today. We hope to learn more about the suitability of shark habitat in northern Florida and southern Georgia.”

Dr. Heather Marshall will take blood samples from the sharks to study the physiological effects of capture stress in the white shark. Because incidental fishing capture of sharks is a worldwide problem, it is critical to understand how capture and handling affects the physiology of these fish, and how such stress carries over to the ability of these animals to recover.  Such data are vital for management of sharks vulnerable to being overfished and/or becoming accidental bycatch.

“By taking blood samples from these white sharks, we’re able to learn more about how these sharks react after they are caught, handled and released,” Marshall said. “Data collected from this trip, not just for my research, but for others as well, will lend valuable insight into how to better preserve this species, and that is critical.”

During this expedition, Ritchie will collect bacterial samples from the shark’s epidermis (outermost layer of skin) to study the antibiotic-producing bacteria associated with white sharks, which can help explain the animal’s natural resistance to disease and injury. Bacteria will be cultured, purified and screened against eight human and three marine pathogens for possible new sources of antibiotics that could fight antibiotic-resistant bacteria.

“Researchers at Mote are trying to understand the rapid wound healing that is a characteristic of sharks, skates and rays,” Ritchie said. “We've discovered that skates and rays harbor numerous bacteria that produce antibiotics — many against some terrible antibiotic-resistant, infectious bacteria strains that are huge problems in hospitals. We're interested in understanding elasmobranch (sharks, rays and skates) immunity by studying their beneficial microbes. As an added benefit, elasmobranchs, including white sharks, may be a novel source of antibiotics.”

Mote scientists have partnered in multiple expeditions led by OCEARCH, a nonprofit organization dedicated to gathering scientific data for tracking (telemetry) and biological studies of keystone marine species such as great white sharks.

The ship M/V OCEARCH, which will be their at-sea laboratory, has a 75,000-pound-capacity hydraulic platform designed to safely lift mature sharks out of the ocean. This allows multi-disciplinary research teams to work with the sharks and then return them to sea.

Sharks play important roles as top predators that help preserve the balance of ocean ecosystems, but they face pressures such as overfishing and habitat loss, and much more research is needed to fully understand threats to their populations and to inform fisheries management.

During the expedition, sharks will be tagged with satellite transmitters, allowing scientists to monitor their travels and the public to follow along via OCEARCH’s global shark tracker at www.ocearch.org.

Mote Marine Laboratory is an independent, nonprofit marine science institution dedicated to today’s research for tomorrow’s oceans. Mote has 25 diverse research programs that work in oceans around all seven continents, and it has the only Center for Shark Research designated by U.S. Congress.

How you can follow the progress of Expedition Jacksonville:

Watch for FREE live on YouTube or live and interact on the Google Hangout. For more info: seatrek.tv/live.

Enhanced access for education groups. Schools and other education-focused groups are invited to make a Google Hangout session an interactive experience with the ability to ask questions via chat or video. Recommended for ages 11-18 or grades 6-12. For more information contact Kasey Gaylord-Opalewski, Digital Learning Coordinator, at kasey@mote.org or 941-388-4441, ext. 263. 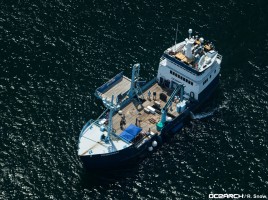 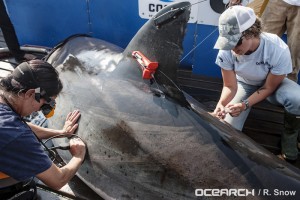