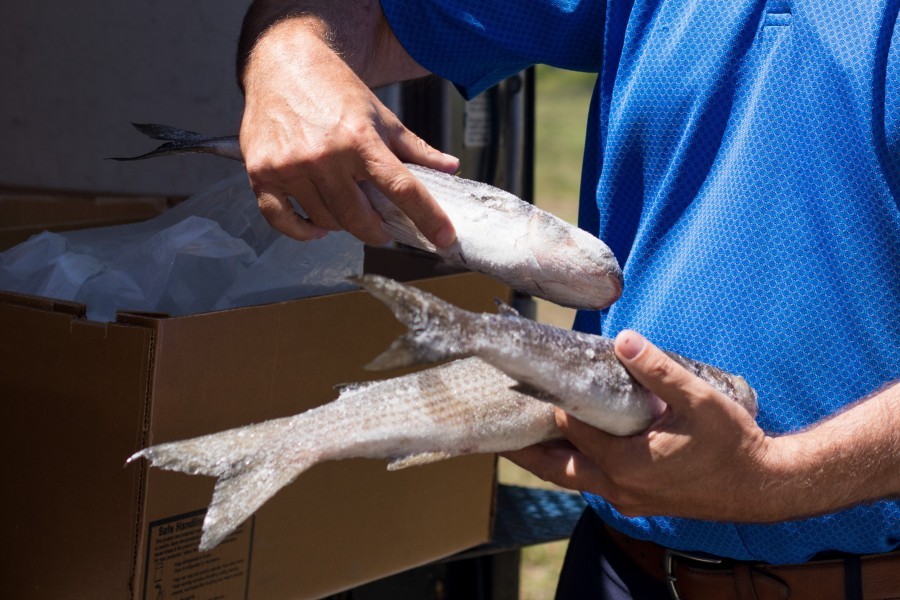 ­­Seafood farmers can raise fish successfully on a diet made with leftover, wild-caught mullet—a discovery that can improve sustainable seafood farming and add value to a major Florida fishery—reports a Mote Marine Laboratory study supported by Gulf Coast Community Foundation.

Study partners fed farmed fish a newly developed diet made with whole, striped mullet (Mugil cephalus)—a species fished to produce valuable bottarga (cured roe), leaving behind meat and oil that are underutilized. In the study, the mullet-based diet supported excellent growth, health and survival in farmed fishes—nourishing a freshwater fish species as effectively as a commercial diet, and nourishing a saltwater species more effectively than a commercial diet.

Photo: One of the diets used to feed aquaculture-raised fish in the new study. Credit: Mote Marine Laboratory

Farming animals and plants in water, known as aquaculture, supplies more than half the planet’s seafood and must continue growing because most wild fish stocks are overfished. To help aquaculture feed more people with less environmental impact, Mote scientists have developed recirculating marine aquaculture systems that recycle 100% of their water at Mote Aquaculture Research Park (MAP) in eastern Sarasota County, Florida.

One big challenge is how best to feed aquacultured fishes—many of which eat other fishes in the wild. Commercial aquaculture diets usually contain some wild-caught fish meal from species including menhaden, anchovies, sardines and herring, but these fisheries are limited and they play important roles in ocean ecosystems. As fish farming continues to expand around the world, the importance of identifying alternative protein sources is increasing.

In 2016, Mote launched an effort to do just that, after competing successfully for funding from Gulf Coast Community Foundation in the 2015 Gulf Coast Innovation Challenge to grow Florida’s ocean-driven, “blue economy.”

“We saw a unique opportunity to transform a locally available by-product—excess mullet from the fishery in Cortez, Florida—into a valuable fish meal product that could be used in commercial aquaculture feeds. Using excess mullet in aquaculture diets helps both fishers and farmers realize economic and environmental benefits for their industries, their consumers and the oceans,” said Dr. Kevan Main, Manager of the Marine & Freshwater Aquaculture Program at Mote.

“At Mote, we have long recognized that sustainable aquaculture must grow at an accelerating pace to help feed the world, and projects like Dr. Main’s aquafeed study are vital for meeting that need,” said Dr. Michael P. Crosby, President & CEO of Mote. “Mote’s scientific staff—particularly the outstanding innovators at our Mote Aquaculture Research Park—are deeply grateful to Gulf Coast Community Foundation for supporting our advancement of the science needed to expand our blue economy.”

“Our Innovation Challenge was all about inspiring and seeding new ideas that could produce an economic impact for our region with environmental benefits,” said Mark S. Pritchett, President/CEO of Gulf Coast Community Foundation. “It was a long play, but Mote followed through on this project and has clearly realized that potential.”

Mullet represented the largest commercial fishery by weight in Florida as of 2014. Mullet bottarga is one of southwest Florida’s largest exports, but mullet flesh is in lower demand and is often discarded once a female’s eggs are removed, and for males in general.

“This study demonstrates the potential to use the mullet-based fishmeal as an alternative fishmeal resource,” Main said. “The success of the feed trials is not measured by simply the best growth and performance; the real success is that the mullet-based diets performed as well as, or better than, the standard commercial and menhaden-based diets.”

This success, Main and partners note, offers an opportunity to add value and expand jobs for the Cortez area mullet fishery, one of the oldest existing fisheries in the country.

Main said: “Hopefully, this will motivate other seafood communities and aquaculture producers to identify potential sources of valuable fishmeal and alternative protein sources.”

With the successful completion of this project, Mote scientists, in collaboration with scientists at the National Center for Mariculture in Israel, are undertaking new studies to expand knowledge of alternative aquafeeds—including various algae and bacteria known as “periphyton.” Mote scientists are also working to apply aquafeed data from their own studies and others around the world to develop the new Mote Aquafeed Decision Tool (MAQFEED): An artificial intelligence software tool to help fish farmers and aquafeed makers choose sustainable, productive and affordable fish diets.