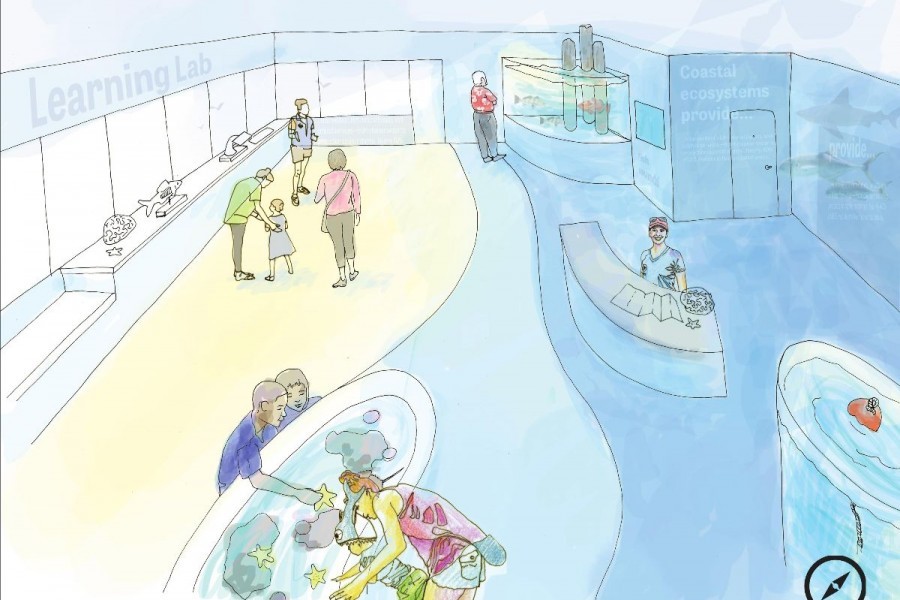 Sarasota, Fla. ­— Mote Marine Laboratory & Aquarium and the City of Anna Maria have signed a Memorandum of Understanding (MOU) to pursue the construction of a marine science education and public outreach center at the famous City of Anna Maria Pier. The Pier, one of Manatee County’s largest tourist attractions, was reconstructed following Hurricane Irma, and this Center will inspire visitors and residents alike to connect to the importance of the surrounding marine ecosystem that makes Anna Maria Island one of the top destinations in Florida.

Unanimously approved by the City of Anna Maria Commission, and signed by Mayor Dan Murphy and Mote President & CEO Dr. Michael P. Crosby, this MOU will allow the City of Anna Maria and Mote to pursue constructing the Center in the 1,800 square foot empty space currently located at the Pier. Physical plans for the Center include several live animal exhibits as well as several interactive exhibits. Mote’s Education team will also provide regular programming for members of the public that will help them better understand and appreciate the area’s native flora and fauna and learn conservation-minded fishing practices. Following the acquisition of funding by the City, the construction will take approximately six months.

"The two core pillars of what we do at Mote are research and enhancing ocean literacy by sharing our research with the public, especially the next generation. Mote has always engaged our community through informal science education in our Aquarium and in the classroom,” said Mote President & CEO Dr. Michael P. Crosby. “Likewise, the community of Anna Maria has a great connection to the marine environment, especially apparent in the 100-plus year history of the City Pier. The City Commission and the Mayor have been wonderful to work with as we came up with this proposal, and we're grateful that they recognize this mutually beneficial partnership.”

“Our community is thrilled with this new partnership with Mote, and all the opportunities this allows to showcase our City Pier,” said Mayor Dan Murphy.  “Both visitors and residents alike will enjoy this Center that will help enhance the environment, economy and quality of life in the City of Anna Maria.”

“Mote’s experience in informal education and interpretative exhibits is longstanding since the main Aquarium opened on City Island in 1980,” said Mote Associate Vice President for the Aquarium Evan Barniskis. “Additionally, Mote operates two satellite education and outreach centers in the Florida Keys: at the Florida Keys National Marine Sanctuary’s Eco-Discovery Center in Key West and at the Florida Keys History Discovery Center in Islamorada. This new location will be a great educational and entertaining experience for Anna Maria and Manatee County residents and visitors.”

Mote has always engaged our community through informal science education at Mote Aquarium, in the classroom, and at other satellite education facilities. Mote Education team's award-winning programming reaches nearly 30,000 participants every year. Mote Associate Vice President for Education Aly Busse said, “The restored Anna Maria Island City Pier presents an additional location where Mote can connect children and adults with our marine research, how they can interact and conserve the waters around Anna Maria, and tell the long history of the community's relationship with the marine environment.”

About Mote: Mote Marine Laboratory & Aquarium is an independent, nonprofit, 501(c)3 research institution founded in 1955. Mote began and flourished through the passion of a single researcher, Dr. Eugenie Clark, her partnership with the community and philanthropic support, first of the Vanderbilt family and later of the William R. Mote family.

Today, Mote is based in Sarasota, Florida, with five campuses stretching from Sarasota to the Florida Keys. Mote has more than 20 world-class research programs studying oceans locally to internationally, with an emphasis on conservation and sustainable use of marine resources. Mote’s vision includes positively impacting public policy through science-based outreach and education. Showcasing the Lab's research is Mote Aquarium, open from 9:30 a.m. to 5 p.m. 365 days a year. Learn more at mote.org.