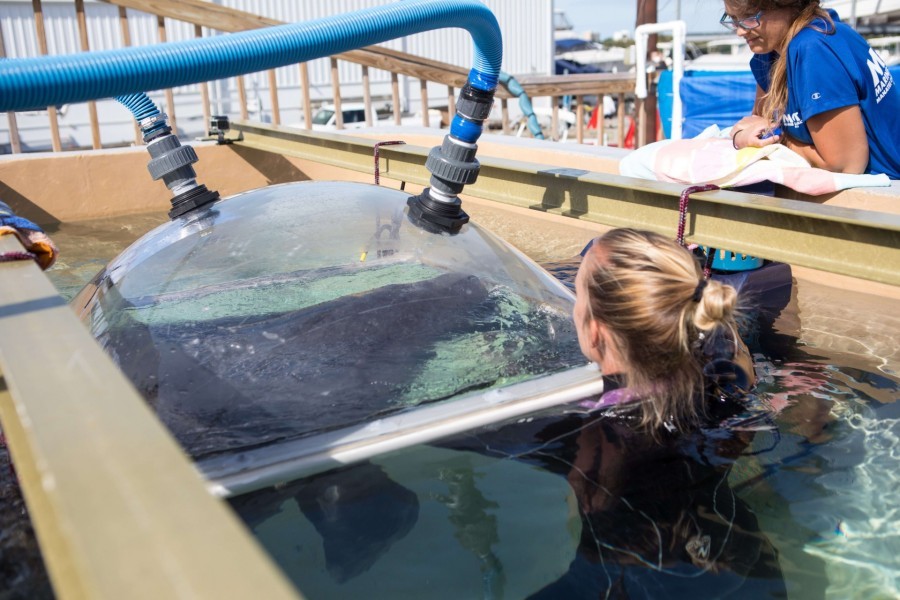 The resident manatees at Mote Marine Laboratory & Aquarium have been swimming against a current in an Endless Pool water flume  — the same kind of swimmer’s “treadmill” used by human athletes — for the first study of energetic costs in continuously swimming manatees.

Hugh and Buffett, Mote’s highly trained manatees, participate voluntarily in this project co-led by researchers at Mote and the University of California, Santa Cruz. Project scientists trained Hugh and Buffett, using positive-reinforcement rewards such as apples and carrots, to rest or swim at specific speeds and then breathe under a special acrylic dome connected to an oxygen analyzer. By measuring energetic cost through calculating their oxygen consumption every minute and converting to the number of calories burned, the researchers seek to better understand the cost for healthy manatees in a controlled setting. This baseline data is useful for wild manatee rescue, rehabilitation and research. Energetic cost means the calories burned (or kilojoules of energy consumed) by a manatee’s body at rest or in motion, and replenished by consuming food.

“When sick or injured manatees are brought to rehabilitation facilities, you can feed them to increase their weight, provide the best available treatments and look at blood work, but we don’t have ways to assess some important  physiological parameters such as energy cost,” said Senior Mote Aquarium Biologist Kat Boerner. “To provide more data to fine-tune rehabilitation, we want to better understand how much energy a healthy manatee burns, which gives us a better idea of the caloric intake needed for an animal of a given size.”

“It’s important to know how much energy manatees expend while swimming to or between warm water refugia, and how that might affect the amount of food they need to maintain body condition during those times,” said Jason John, Ph.D. Candidate in the lab of Dr. Terrie Williams, a wildlife Eco-physiologist at UC Santa Cruz. “Also, if wild manatees increase their speed, dive or otherwise change their behavior in response to boat traffic, how much of an energy deficit do they incur?”

The current project was initiated by Williams and Dr. Joseph Gaspard, in collaboration with a Mote Senior Scientist and manatee expert, the late Dr. John Reynolds.

Now, after a few years of project development and manatee training, Hugh & Buffett have participated in the first successful research trials. In the past month, both animals swam against the Fastlane® system made by Endless Pools, which was provided at a discount for this study. While swimming against currents of known speed, each manatee wore an accelerometer — a fine-scale motion sensor — on a band encircling the peduncle between its body and tail fluke.

“If we can correlate oxygen consumption to acceleration, it could allow us to start asking questions about energy cost in the wild from free-ranging manatees outfitted with the accelerometers,” John said.

Once all necessary data are collected and analyzed, project partners aim to make their findings available to other scientists, engineers and caregivers to support advances in research and rehabilitation.

Said Boerner: “Hugh and Buffett are specially trained to do something very important — provide valuable data for the future of their wild counterparts. Also, over years of research with these two, we’ve found that new projects are very stimulating for them. This study will enable scientists to quantify human impacts on the slow motion lifestyle of wild manatees.” 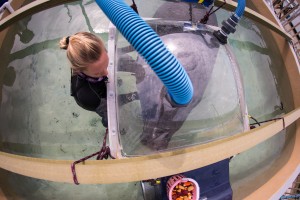 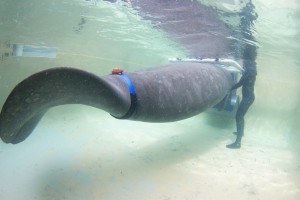 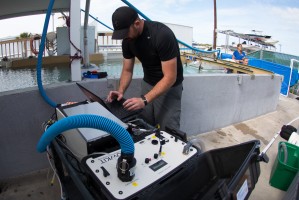