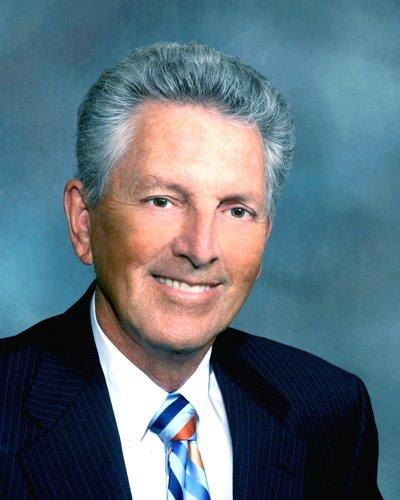 Thanks to the generous support of the Glaze family and their company, Fort Wayne Metals, Mote is honored to announce a new research fund in memory of Ronald A. Johnson.

Johnson, former mayor of Longboat Key, served as a Mote Trustee from 2002 to 2013, holding multiple leadership positions and making significant contributions to the organization.

“When he moved to the area in 1996, Ron got involved right away as a Mote volunteer,” said Mote President & CEO Dr. Michael P. Crosby. “He was always positive and looking out for the interests of others, and he brought his expertise and dedication to Mote’s mission for more than 20 years. We are extremely grateful for the opportunity to honor him for his tremendous efforts on behalf of Mote and its mission.”

As a Mote Trustee, Johnson chaired multiple committees, notably focusing on development, governance, finance and investment. He remained an Honorary Trustee through his passing in 2016. He also served as Mote’s Volunteer Board President from 2002-2004 and as Interim Vice President of Development from late 2004 through March 2005.

"We are happy to support Mote through the new Ronald A. Johnson Memorial Fund,” said Scott Glaze, Chairman and CEO of Fort Wayne Metals and Ron’s cousin. “Ron was a longtime, ardent supporter of Mote and its scientific endeavors. We believe he would be very proud to support Mote scientists in their vital biomedical research."

The Ronald A. Johnson Memorial Fund will support Mote’s biomedical research to advance studies on cancer-fighting compounds from sharks. The funding has been matched by several other gifts, including generous support from the Rick and Nancy Moskovitz Foundation.

“We are extremely grateful for this new support that will advance our research and facilitate the opportunity to work with Likarda, a company with a strong focus on isolating bioactive compounds — which is just what we need,” said Dr. Carl Luer, manager of the Marine Biomedical Research Program at Mote, who partners in this research with Dr. Cathy Walsh, manager of the Marine Immunology Program.

If the individual cancer-fighting compounds can be isolated successfully, then the researchers will focus on understanding exactly what those compounds are and how they might contribute to inhibiting cancer cells. These basic research steps must occur to move promising compounds toward possible testing and development by the pharmaceutical field.

Ultimately, Mote scientists hope that cancer-inhibiting compounds can be produced from continuous cultures of immune cells instead of relying on natural populations of sharks for fresh immune tissue.