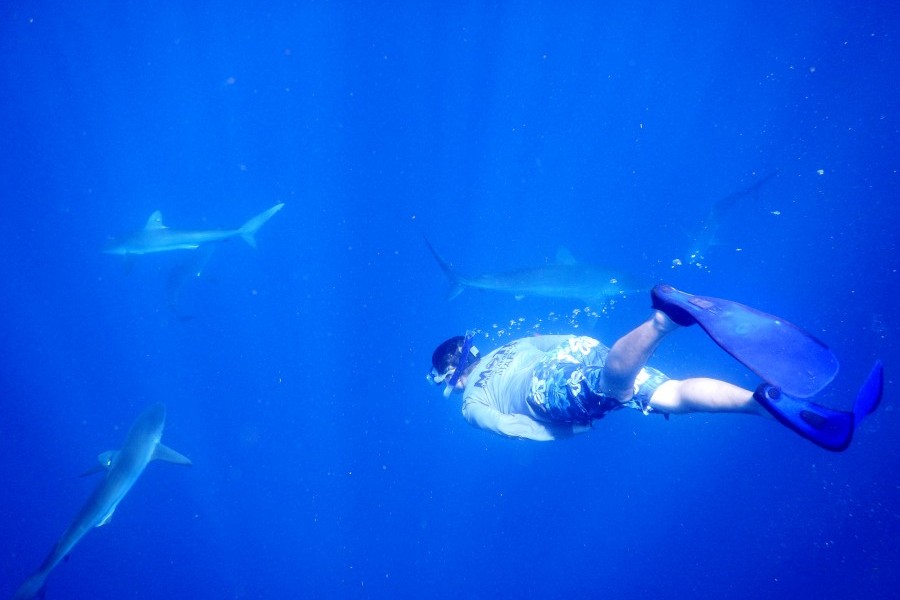 Sharks gained new protection in Cuban waters on Oct. 21, when the Cuban government released its National Plan of Action for Sharks with the goals of conservation and sustainable management of these ecologically and economically important fishes.

Scientists from Mote Marine Laboratory who participated in the plan’s development are praising this major, collaborative step forward for shark and ray conservation in Cuban waters — a major area of focus for Mote’s Center for Shark Research.

The plan was adopted by the Cuban government and prepared by Cuban scientists working together with many international institutions, particularly the U.S.-based Environmental Defense Fund (EDF), which has been working to help protect Cuba’s marine environments for 15 years. Mote senior scientist Dr. Robert Hueter played a significant role in the plan's development - see below.

Read EDF’s article about this historic development.
Read a news article from Nature including quotes from Hueter.

Dr. Robert Hueter, director of Mote’s Center for Shark Research, is a senior advisor and reviewer for the new National Plan of Action, serving as a key non-Cuban shark expert on the plan and working closely with Cuban scientists and officials, EDF scientists and other contributors from multiple nations.

“This plain aims to ensure that Cuba’s shark and ray populations are healthy, that shark and ray fishing is sustainable, and that Cuba utilizes non-consumptive uses of these animals, such as in ecotourism,” Hueter said. “Healthy shark populations help to ensure healthy marine ecosystems. Most of the shark species we’re dealing with in this plan are migratory species that travel to other areas of the Gulf and Caribbean, including the U.S., so the work we do here helps shark conservation elsewhere.”

For more than 10 years, Mote scientists have been traveling to Cuba and forging collaborations with Cuban research institutions. Mote is an independent, nonprofit institution not subject to as many Cuba travel restrictions placed on U.S. state and federal institutions. The Lab’s top-notch scientists have been working with Cuban partners to study the nation’s sharks and rays, other fishes, marine mammals and corals. Their work advanced in exciting ways in early 2015, when Mote scientists and partners from Cuba and the U.S. placed the first satellite transmitter tags on sharks in Cuban waters, conducted the first coral transplant experiment in Cuban waters and more. The action was captured on video for Discovery's Shark Week Program "Tiburones: The Sharks of Cuba," which aired in summer 2015. (Press release on the expedition.)

Statement about Cuba's National Plan of Action for Sharks from Dr. Robert Hueter, director of Mote’s Center for Shark Research

“For me and Mote, this is the culmination of a dream that began 10 years ago, when I first went to Cuba for discussions with the University of Havana to revitalize their shark research program. We dreamt of bringing back Cuba's legacy in shark research — which dates to the mid-19th century but has been nearly dormant for the past 40 years — and putting Cuba on a path of better understanding of their shark resources for sustainable management and conservation.

“That dream came true on Wednesday with the announcement of Cuba's National Plan of Action for Sharks. The Environmental Defense Fund has been the primary non-Cuban  driver of the National Plan of Action process for the past two years, engaging with me as their primary shark expert advisor beginning five years ago, and EDF deserves huge credit for getting this done.

“When I began working in Cuba in 2005, before the National Plan of Action was in development, sharks in Cuban waters were not the priority that they are today. By starting a completely new program in shark research on Cuba’s northwest coast with the University of Havana's Center for Marine Research, achieving research success and drawing public attention, we made sharks in Cuba a higher priority for many different groups. I am pleased that we have been able to learn so much, and that our work has enabled, informed and encouraged others who share our mission of conservation and sustainable use of marine resources.”

*Hueter will return to Havana, Cuba Nov. 13-20, 2015, to speak at the U.S.-Cuba-Mexico Trinational Initiative for Marine Science and Conservation in the Gulf of Mexico and Western Caribbean, as well as at MarCuba 2015: Tenth International Marine and Coastal Science Conference.