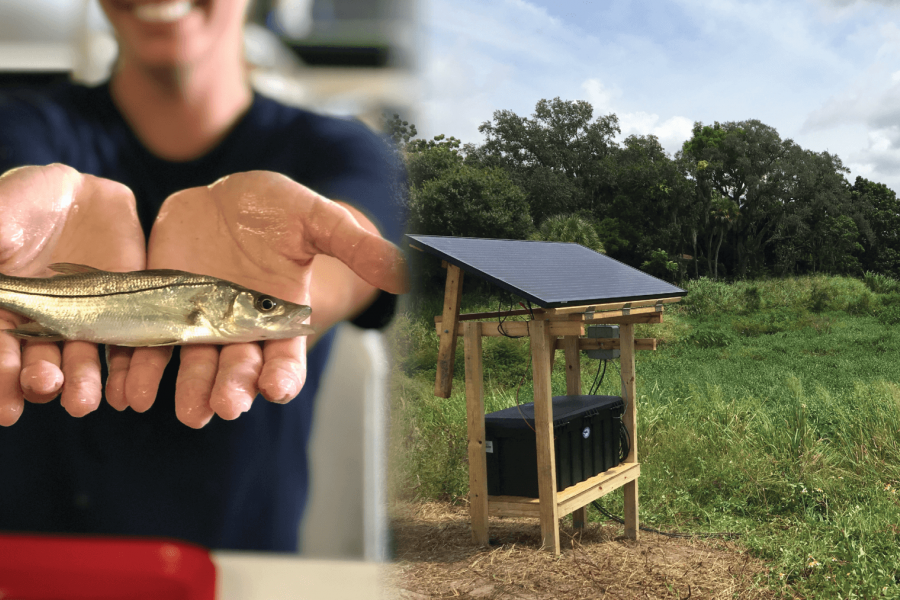 Now, Mote’s Fisheries Ecology & Enhancement team with Staff Scientist Dr. Ryan Schloesser is working to deepen knowledge of how well certain areas of the canal systems support juvenile snook and ultimately “export” these popular sportfish into Phillippi Creek, where they can continue growing before entering Sarasota Bay and the Gulf of Mexico fishery. Snook normally start their lives in shallow, sheltered, backwater habitats with plenty of vegetation. Can local stormwater canals better function like those natural nursery habitats and provide these fish shelter and safe passage into their next stage of life?

To answer this question, Mote scientists release juvenile, hatchery-reared snook tagged with passive integrated transponders (PIT tags) that are detected each time a fish swims within range of Mote’s antennae along shore. One of Mote’s new antennae—its ninth in the Phillippi Creek system—was placed near a sediment sump at Phillippi Creek Levee Trail, where the creek connects to a major canal system. Previous Mote surveys have documented snook near such structures locally.

“We are working to understand how well these canals can support fish in their current state,” Schloesser said. “Snook have been seen as far upstream as the Celery Fields, but if our hatchery fish struggle to move between the canals and the creek, then wild fish will struggle too. So a key question is, should some canal areas be adjusted to a more naturalistic state that would better allow them to receive wild juveniles and export these fish?”

Schloesser has worked with Harold Roebuck and other Sarasota County staff members to place snook-monitoring antennae where they can gather meaningful data, at locations where the county has placed features to improve water quality coming out of the canals. For example, another antenna was installed recently near Tanglewood Drive at a site where county staff are testing a “step-ladder” with pools that gradually increase in height, with the goal of reducing major barriers to species such as snook and mullet, while also collecting sediment that would otherwise enter the creek.

This month, Schloesser and colleagues plan to release three groups of juvenile snook into the Phillippi Creek canal system as part of their long-term fisheries research effort in partnership with the Florida Fish and Wildlife Conservation Commission. Over the years, Mote scientists have released thousands of tagged, juvenile snook that serve as “ecological probes” to help answer multiple scientific questions.

“Now, our earlier released fish are getting bigger, and we’re redesigning the placement of our antennae to look at broader-scale habitat-use patterns in the Phillippi Creek system. The canals are a big part of that system,” Schloesser said.

In general, Schloesser says: “If we can learn how to make these canals more productive for snook, they can help the snook fishery respond better to challenges—like the mass mortality we observed during the 2018 red tide.”

Residents can learn how to protect and enjoy the Phillippi Creek system through this education and awareness site provided by the Science and Environment Council of Southwest Florida: phillippicreek.org