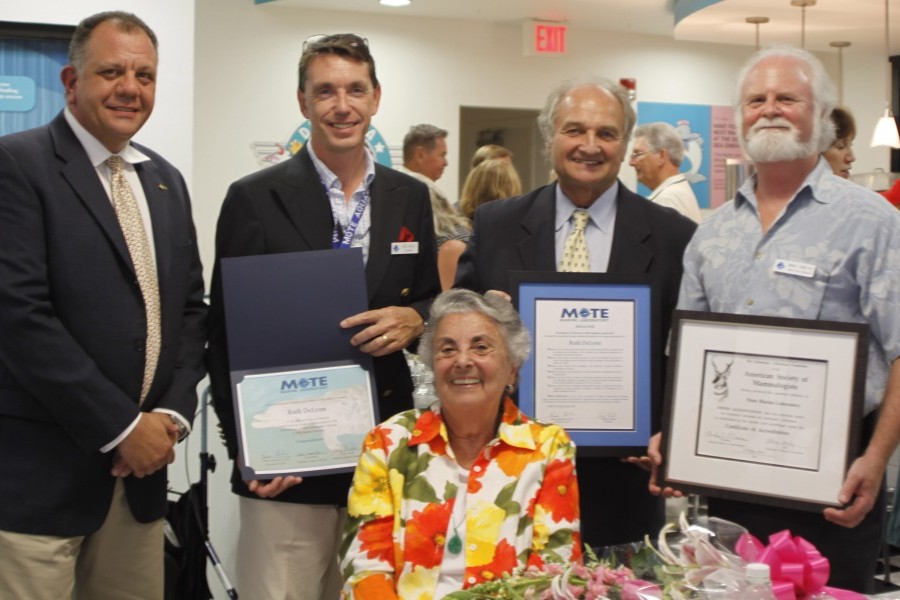 Ruth DeLynn, the creator and curator of one of the most important and extensive collections of dolphin and whale bones in the nation, died on July 8 following a long-term illness. DeLynn, fondly known as “The Bone Lady,” was a volunteer and adjunct scientist at Mote Marine Laboratory for 30 years. She created the bone collection and curated it — meticulously cleaning and preserving the skeletons of dolphins and whales so that they may be used in further studies necessary to unlock the cryptic lives of these animals. The collection was officially named the Ruth DeLynn Cetacean Osteological Collection in her honor in 2007.

The Collection, which is highlighted in a Mote Aquarium exhibit, is a key element of Mote’s “cradle to grave” philosophy of studying dolphins and whales that includes the Sarasota Dolphin Research Program — which focuses on understanding the lives of the 160 resident dolphins living in Sarasota Bay — and the Stranding Investigations Program, which recovers stranded cetaceans and performs detailed necropsies to determine cause of death.

After necropsy, the bones are then prepared for The DeLynn Collection, where they can later be used by scientists to further our knowledge of dolphins and whales — such as the discovery of the first naturally occurring hybridization documented in a marine mammal species. The study, about the clymene dolphin, was based extensively on bones in the DeLynn Collection and published earlier this year in the scientific journal PLOS ONE.

“Ruth DeLynn was truly an amazing person — she was a dedicated scientist and volunteer,” said Mote President & CEO, Dr. Michael P. Crosby. “Thanks to Ruth’s long-term dedication, attention to detail and hard work, the American Society of Mammalogists awarded this collection not just accreditation but also their highest praise. Mote was very fortunate to have Ruth as part of our family and we are so happy that we played such an important role in her life. It is indeed a sad loss but the remarkable work will of Ruth DeLynn will live on at Mote.”

DeLynn began volunteering at Mote after retiring from the American Museum of Natural History in New York. “Her passion really impressed me the most,” said Dr. Kumar Mahadevan, Mote’s President Emeritus, who met DeLynn when she first became a volunteer. “She really helped us understand how important it was to develop this collection and all of the information we could gain by developing it. Then she set off to make it happen. Her husband Hubert was her best friend and a real cheerleader for her creation of the collection and, through it, she really made a difference.”

Key to the collection’s taxonomic value is the detailed documentation that accompanies each specimen. The collection allows scientists to determine subtle differences between populations and abnormalities and pathologies among individuals. One of the key aspects of DeLynn’s Collection is the fact that it contains whole skeletons — not just the skulls, as is the case with many animal bone collections.

“I learned a lot from working with Ruth and I really appreciate the meticulous nature of her personality and the collection she curated,” said Gretchen Lovewell, manager of Mote’s Stranding Investigations Program. “She really helped me understand the importance of looking at animals holistically and Mote gained a lot from her work.”

Lovewell worked closely with DeLynn for the last five years, but knew of her work long before coming to Mote. “She’s known across the country as The Bone Lady. Her reputation helped build this collection — other researchers were happy to share specimens because they knew they would be well cared for here.

“She was also an inspiration to me personally… She walked on every continent, had her foot in every ocean in the world. It was a privilege being mentored by her. I feel like I’ve lost a grandma, a friend, a teacher and a colleague all at once.”

“It’s been an exciting journey to build this collection from the ground up,” DeLynn herself said at a special reception to celebrate the achievement in 2011. “This accreditation has made 30 years of work worth it.”

Ruth DeLynn is a New York native who raised her family in Westchester. She is survived by her daughter Nina (Donald) Berk of Newton, Mass., son William (Donna) DeLynn, of Rye Brook, N.Y., and granddaughters Kimberly, Amy, Julia and Robin. She was predeceased by her husband, Hubert.

A celebration of her life is being planned for a later date. The family requests that memorial donations be made in Ruth’s name to Mote Marine Laboratory’s Stranding Investigations Program or the Ruth DeLynn Cetacean Osteological Collection. (Checks may be mailed to Mote Marine Laboratory, 1600 Ken Thompson Parkway, Sarasota, FL, 34236. Please note memorial information on check. Or make an online donation now. 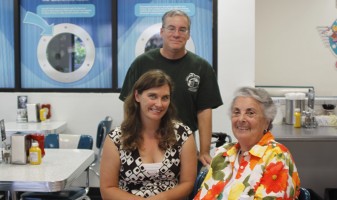