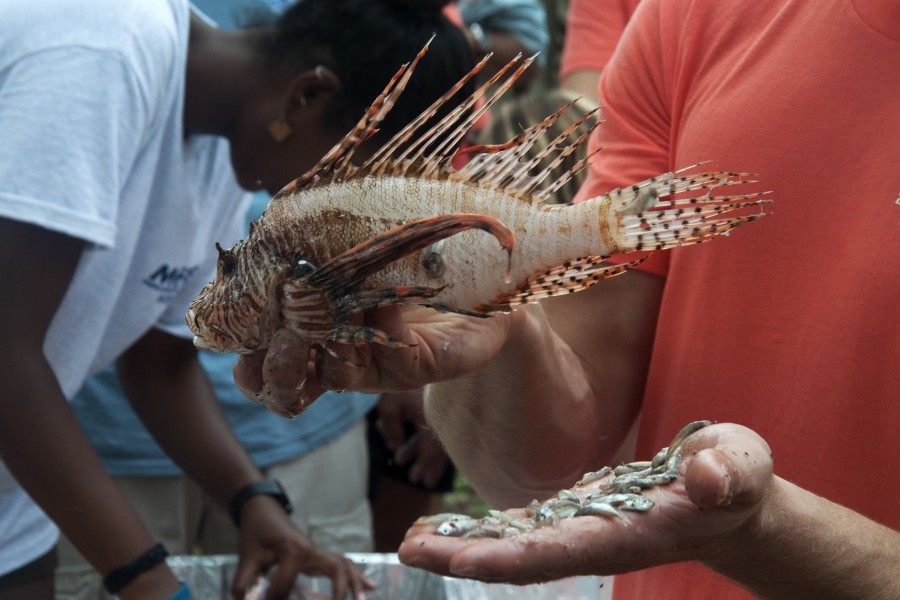 Divers and snorkelers removed 456 invasive lionfish from the Gulf of Mexico during the second annual Sarasota Lionfish Derby, which culminated today, July 12.

The Derby was hosted by Mote Marine Laboratory, a world-class marine science institution, in cooperation with Reef Environmental Education Foundation (REEF), which helps study and address the lionfish invasion and sanctions official Lionfish Derbies, and ZooKeeper, the Sarasota-based manufacturer of the leading lionfish containment unit used throughout invaded areas. The Derby was presented by Capt. Eddie’s Seafood.

Eight teams of 27 divers and snorkelers from Sarasota, Venice, Tallahassee, Fort Pierce, Palmetto, St. Petersburg, Tampa, Vero Beach and Boca Raton, Fla., and from Dallas, Texas, vied to catch the most lionfish, the largest lionfish and the smallest lionfish in Gulf waters ranging from Collier to Escambia County. The Derby lasted from the evening of July 10 through early afternoon on July 12, when cash prizes were awarded to first, second and third place winners in each category. Additional event proceeds will help support science and education programs by Mote and REEF.

Scroll down for winners.

Lionfish are venomous, fast-reproducing fish that have spread along the eastern Atlantic coast, through the Caribbean Sea and Gulf of Mexico, posing a major threat to Florida’s native species and ecosystems. They consume more than 70 different species of fish and crustaceans, and in heavily invaded areas they have reduced fish populations by up to 90 percent and continue to consume native fishes at unsustainable rates.

The only controlling predators of invasive lionfish in Florida are humans — and the fish are delicious to eat. Lionfish Derbies are an important way to harvest large numbers of this invasive species, train more people to safely remove them, encourage restaurants and the public to cook and eat lionfish and support scientific studies of the invasion.

The Sarasota Derby culminated Sunday with a celebration at the Sarasota Outboard Club, next-door to Mote on City Island, Sarasota. There, the public visited educational booths about lionfish, checked out gear designed to capture them, tasted fresh lionfish ceviche prepared by staff from REEF and ZooKeeper, and watched lionfish be counted and measured by REEF staff and dissected by Mote scientists and graduate students involved in the RTR Lionfish Ecosystem Modeling Workshop through University of Florida. The Florida Fish and Wildlife Conservation Commission (FWC) and others shared information about the lionfish invasion and how people can help.

Lionfish captured during the Sarasota Derby were measured and participants documented the capture locations, depth, habitat type and number of fish found in a given area, providing vital data for research and monitoring efforts. Mote scientists examined the stomach contents of fish to help document what these voracious predators are eating. In addition, REEF staff use mathematical modeling to estimate how many prey fish could have been consumed by lionfish caught in derbies, based on the size and number of lionfish caught.

The public can help document the lionfish invasion by reporting sightings through REEF, U.S. Geological Survey or the Florida Fish and Wildlife Conservation Commission (FWC). FWC has a Report Florida Lionfish app available for smartphones.

Once the results were in, Allie Elhage, inventor of Zookeeper Lionfish Containment Unit, kicked off the awards ceremony and introduced co-leaders from Mote, REEF and FWC.

“Every one of you in this Derby was a volunteer citizen scientist with Mote,” said Dr. Michael P. Crosby, President & CEO of Mote. “We got a tremendous amount of data, which help give us a scientific basis for management decisions. We’re probably never going to eliminate lionfish, but with science and the partnership with volunteers like you, we could gain an advantage in controlling what we hope will be an unsustainable fishery. This Derby will be an annual event here – I guarantee it. We’re going to grow this every year.”

“We all know that a lot of lionfish were removed during the event,” said Lad Akins, Director of Special Projects at REEF. “Efforts like this, taking lionfish out of the water, have a huge impact. We know the lionfish will recolonize, but every lionfish that comes out of the water means less pressure on our native species. Studies have been done in the Bahamas and the Florida Keys that show a single-day lionfish removal event can reduce the local lionfish population by 45-70 percent. So rest assured that your work removing these fish has a huge impact on keeping the population down.”

Meaghan Faletti, Lionfish Outreach Coordinator for FWC and a participant in the Derby, noted its value for public education. “Not only is it a great event for getting people on the water, but also drawing crowds here and showing them what they can do to help. Not everyone is a diver but everyone can play their part. We want to get people interested in eating lionfish, creating lionfish jewelry and getting involved in other ways. One of our big projects now is our Reef Rangers lionfish control program. You can adopt a reef and choose areas where you plan to clean off lionfish. We want to find out where people are removing them, where they’re not, and facilitate that communication.” 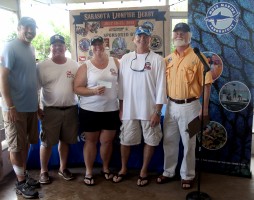 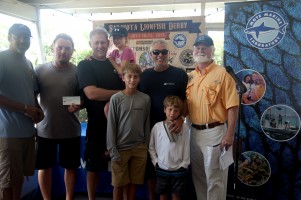