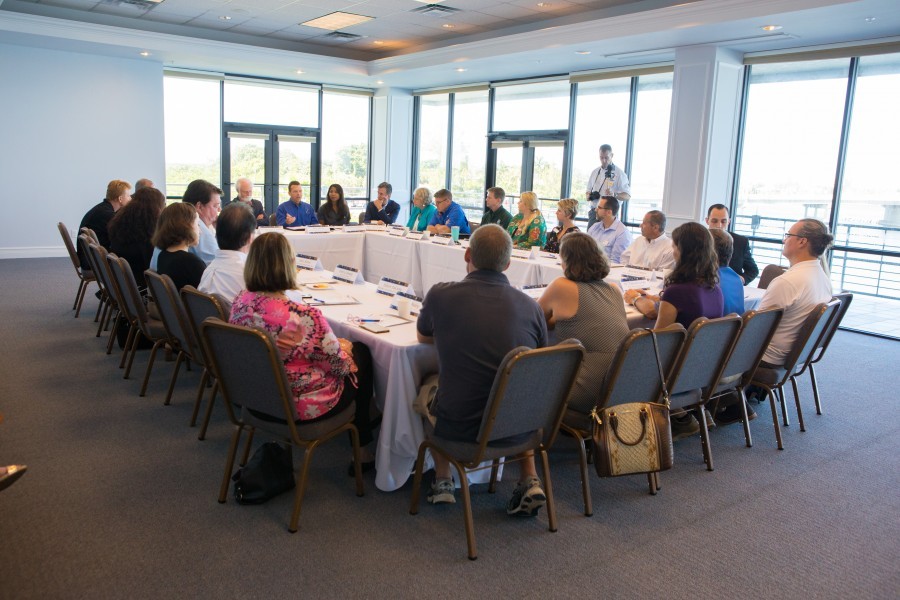 Leadership from state agencies and Mote meet for a roundtable discussion on red tide on Sept. 24, 2018

Mote — an independent, nonprofit marine science institution based in Sarasota — served as host site for the news conference, highlighting its innovative work in red tide research and response.

During the news conference, FWC Executive Director Eric Sutton announced that Governor Scott was directing a $2.2 million investment to test innovative, red tide mitigation technologies, including specialized clay field experiments and expansion of Mote’s novel mitigation technologies, such as its ozone treatment system. Mote originally patented its ozone system to remove red tide and its toxins from water entering Mote Aquarium, later tested the system with seawater in a 25,000-gallon “mesocosm” pool at Mote’s Sarasota campus to prepare for field tests, and most recently conducted a pilot-scale field test in a dead-end canal in Boca Grande. While data from the pilot test are still being analyzed, it’s clear that the technology merits future testing to determine its effectiveness at commercial scale.

Last week, Governor Rick Scott also announced a partnership among FWC, Woods Hole Oceanographic Institution, Mote, the University of South Florida (USF) and DEP focused on using the specialized clay to mitigate red tide. The new clay technology was selected based in part on past research by Woods Hole and Mote.

The Florida red tide alga (Karenia brevis) occurs naturally in the Gulf of Mexico, where blooms (higher than normal concentrations of K. brevis) form offshore and can be carried by winds and currents to the coast. At the coast, red tide blooms can use natural and human contributed sources of coastal nutrients, and there is no existing technology to eradicate red tide fully or significantly reduce their toxic impacts at seascape scales without causing even greater harm to natural ecosystems.

“For the first time, the State of Florida is launching an initiative that goes beyond monitoring and researching red tide, and we are pleased that the State is partnering with Mote on this major new initiative focused on applied science and development of mitigation technologies to fight red tide and its impacts,” said Dr. Michael P. Crosby, President & CEO of Mote. “With the funding support announced today, we can significantly expand our capabilities for deploying field testing of advanced technologies. Today’s announcement is one of great hope, built on decades of our incredibly productive science-based partnership with FWC and other collaborating organizations. I am very excited about the future of applied science and technology development to fight red tide impacts.”

“What’s exciting today is that we have worldwide experts on harmful algal blooms here in this room, and in this region,” said FWC Executive Director Eric Sutton. “Between St. Pete and Sarasota we have one of the largest collections of people who study harmful algal blooms anywhere. Working with partners including Mote Marine Laboratory, the University of South Florida and Woods Hole Oceanographic Institution, we’ll test different agents to see what is feasible, and at what scale can we treat red tide. With the governor announcing almost 2.2 million dollars toward these mitigation research efforts, if we’re going to do this and do it right, there are no better experts than who we have here.”

“With the team we have working together, I know the next big breakthrough in how red tide is managed worldwide will come from right here in this region, and that is something to be proud of,” said DEP Secretary Noah Valenstein.

“Research resulting from this collaboration will help ensure the most effective, efficient and timely response to the red tide,” said State Surgeon General and Secretary Dr. Celeste Philip. “DOH will continue to work with state, local and federal agencies to better understand both short term and long-term health outcomes and develop strategies to mitigate the impact of red tide health effects.”

Mote CEO Crosby also emphasized a broader strategic vision that Mote has for the creation of a new and independent Florida-based Marine and Freshwater Harmful Algal Bloom (HAB) Center that will utilize innovative approaches and technologies for prevention, control and mitigation of impacts from red tide and other HABs: rapid assessment and modeling for HAB forecasting; public health protection; and expansion of local community outreach and engagement. Dr. Crosby also expressed his gratitude for the Governor endorsing this concept and asked that the State Legislature embrace this vision as well.

Interest in the effort is bipartisan, legislators said.

“Thank you, Dr. Crosby and Mote, for everything you do,” said State Rep. Joe Gruters, R-Sarasota. “I have lived in Sarasota my entire life. I’ve never experienced red tide as bad as it is here now. We’re so fortunate to have these researchers in our community and to have a governor who stepped to the plate to provide money for this research, so hopefully the red tide impacts can be mitigated so they are less damaging to our economy. I’m calling right now for the Florida legislature to move forward in a bipartisan fashion to provide recurring funding needed to get this job done. It starts right here in Sarasota County.”

“Regardless of politics, we should all be unified in our mission to find ways to repair the damage done to our sea-life, ecosystem and economy, and this is a good first step in that journey,” said State Representative Margaret Good, D-Sarasota. “The advancements of new innovative approaches to deal with red tide are reassuring, collectively. We must also look for solutions to curb nutrients seeping into our water systems.  I am committed to work with my fellow legislators to make sure research funding continues. Our waterways are our economy and should always remain our top priority.”