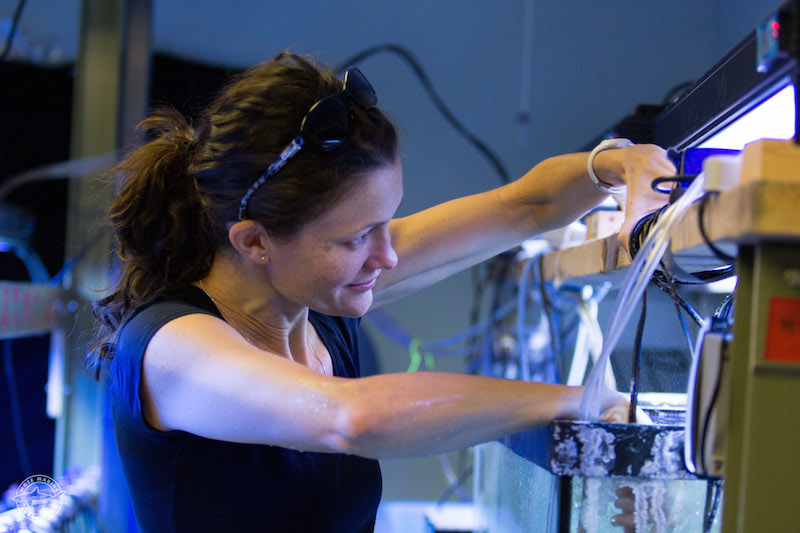 As many as 50 percent of the marine animals, plants and other organisms in Florida’s saltwater environment depend on coral reefs or derive some benefit from reefs during their life cycles. Sadly, in some areas of Florida and the Caribbean, coral cover has declined by 50-80 percent in just the last three decades due to natural occurrences and human impacts such as climate change, ocean acidification, pollution and more.

To help stem the losses, Mote created the Protect Our Reefs specialty license plate and Grants Program, which uses the dollars raised from license plate sales for scientific research to uncover the reasons for coral declines and more.

Hall and Krediet’s Protect Our Reefs grant funded project is focused on using a sea anemone, Aiptasia, as a model system to better understand what changing temperature and pH conditions can have on corals so scientists can be better equipped to conserve corals and protect them from environmental stressors such as bleaching, climate change and ocean acidification.

“The advantage of using Aiptasia over corals in lab experiments is that, first, it reduces the need to involve our local coral reef ecosystem in experimentation,” Hall said. “Secondly, Aiptasia do not produce a calcium carbonate skeleton and so they will allow us to easily test the effects of both elevated temperature and reduced seawater pH on the physiology of the anemone. And thirdly, Aiptasia reproduce faster than corals and are relatively easy to take care of, which allows us easy access to these organisms for research.”

The project has two main objectives.

The first is to look at the microscopic life associated with coral reefs, including beneficial bacteria that are part of the corals’ immune systems and the microscopic algae that give corals energy and color, and how that is affected by the different water conditions.

“We are interested in characterizing the role these potentially beneficial microbes play in the overall health and success of the entire coral organism,” Krediet said.

The second objective involves gaining insight into some of the physiological challenges that corals undergo during periods of elevated temperature and increased ocean acidity.

“As far as we know, very little work has been done focusing on Aiptasia grown in high water temperature and decreased pH levels simultaneously,” Hall said. “And we are doing this because we are looking to see if this organism can not only serve as a model for coral-microbe interactions, but also to reflect the physiological response of corals to changing environmental condition.”

Hall and Krediet plan to monitor the organisms and document the effects of different levels of temperatures and pH affect the organisms.

“As a coral reef microbiologist and physiologist, I am interested in how marine invertebrates respond to their surrounding environments and how their associated microbes alter their physiology,” Krediet said. “Although we are still in the pilot stages of the experiment, such studies will provide insight into the future of soft-bodied organisms as seawater temperatures continue to increase and as ocean pH decreases. Coral reef ecosystems are precious, both ecologically and economically, and we must do everything we can to preserve them for future generations.”

The anemones used in this study are lab-reared anemones that were derived from a single anemone more than 10 years ago. By studying lab-grown populations, scientists can control much of the biological variation and arrive at mechanisms that control behaviors that are observed. From there, scientists can extend their work into wild populations of Aiptasia and other corals.

Undergraduate students in the Marine Science Department at Eckerd College and Mote are also conducting much of the research necessary to complete this project.

“We think it is important to incorporate the next generation of scientists into our projects, because they are the ones who will be seeing most of the effects that changing water conditions will have on our corals,” Hall said. “The physiological side can help us understand issues like coral bleaching. And this might give us some insight into why these symbiotic organisms are bleaching.”