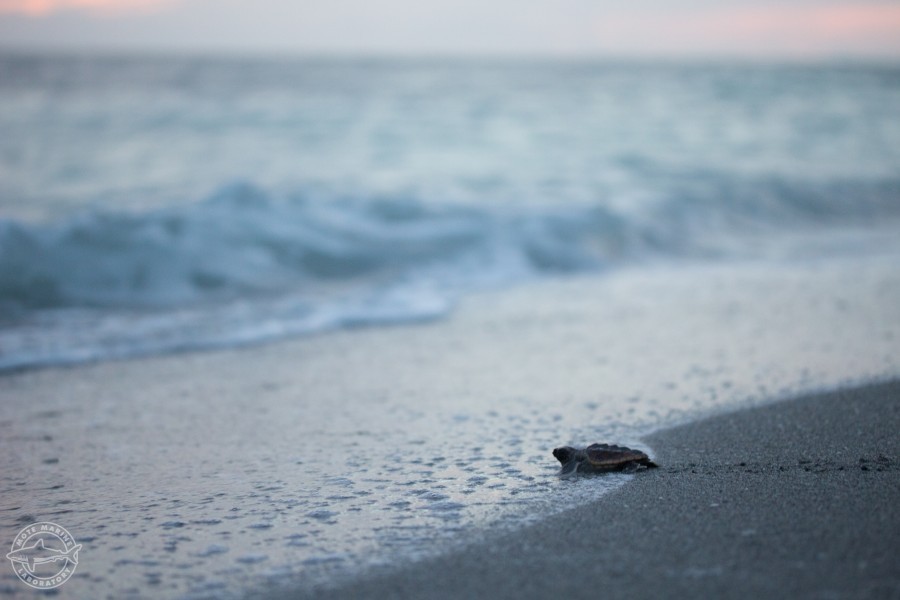 Sea turtles laid a near-record number of nests during their 2018 nesting season on Longboat Key through Venice, Florida, report Mote Marine Laboratory scientists who have monitored this stretch of nesting beaches for 37 years.

A total of 3,151 nests —  3,142 from loggerhead sea turtles and nine from green sea turtles — were documented this year by Mote’s Sea Turtle Conservation & Research Program, which patrols the 35-mile stretch of beaches each day of nesting season, May 1-Oct. 31.

“This year’s total is the third highest overall since our program began about 37 years ago,” said Mote Senior Biologist Melissa Bernhard, noting that the two highest totals for Mote’s area occurred in 2016 (4,588 nests) and 2017 (4,503 nests).  “Over decades, we have learned and are still learning a great deal about the nesting behaviors of sea turtles individually and at the population level, impacts of human activity and animal predators, sea turtle population trends, and more.”

*A false crawl occurs when a sea turtle emerges to nest but returns to sea without leaving a nest.

On July 19, Mote scientists fitted a nesting green sea turtle nicknamed “Gigi" with a satellite tag on Casey Key. Green sea turtles have been nesting along southwest Florida beaches in increasing numbers in recent years, presenting an opportunity to tag nesting females and grow the small data set on this species in the Gulf of Mexico.

“Gigi is one of the few green sea turtles to nest on Casey Key in 2018, and she will teach us more about how many nests green turtles lay, where they go when they have completed nesting and what routes they use to get there,” said Mote Senior Biologist Kristen Mazzarella.

By mid-October, Gigi’s track combined with Mote’s Turtle Patrol data indicated that she nested six times this summer, and on Oct. 9 she began to leave the area to travel to her foraging grounds. As of Oct. 28, she has traveled past the northwest coast of Cuba and onwards toward Cancun, Mexico.  Mote scientists look forward to seeing where she travels to forage for the next few years. In 2018 Mote scientists also satellite-tagged six male loggerhead sea turtles that stranded and received hospital care but would not otherwise have come ashore.

This year, Mote scientists continued to document the challenges facing sea turtle hatchlings, including disorientation due to artificial lights visible from the beach in some areas. Loggerhead and green sea turtle hatchlings emerge at night and normally use dim, natural light to find the sea. Disoriented hatchlings may crawl into swimming pools, roads or other dangerous situations, and exhaust the energy they need to start life at sea. Mote scientists also continued to document some impacts from predators — primarily raccoons, armadillos and coyotes — that damage or destroy nests.

The 2018 nesting season coincided with a widespread bloom of Florida red tide, which began in fall 2017 and has lasted a year. From November 2017 through Oct. 24, 2018, the red tide bloom is estimated to have killed or caused the stranding of 531 sea turtles along southwest Florida — 116 in Sarasota County alone — according to FWC.

Mote’s Stranding Investigations Program, which responds to deceased and distressed sea turtles and marine mammals in Sarasota and Manatee counties, noted that the bloom largely affected the area’s juvenile and subadult sea turtles, as well as some adult males, but nesting adult females and newly-emerged hatchlings did not show a similar spike in mortality. Sea turtles are exposed to red tide toxins by eating contaminated prey, but nesting adult females typically aren’t feeding, and their hatchlings don’t feed until after their “swim frenzy” that propels them offshore. When they begin feeding, hatchlings are generally well beyond nearshore areas where the red tide blooms often persist.

This summer, seven Mote staff, 16 interns and most of their 275-300 volunteers in Mote’s Sea Turtle Patrol braved the red tide-caused respiratory irritation on local beaches to complete their daily nest-marking and data-collection mission. In addition to their already herculean task, the Sea Turtle Patrol assisted the Stranding Investigations Program by being among the first people to report stranded turtles and dolphins, often assisting with their recovery and documentation as well. Decades of data from Mote and others around the state are critical for understanding how sea turtles are faring amid numerous threats.

“It was heartbreaking to be on the beach every day and see the red tide impacts on wildlife, but most of our volunteers were able to continue monitoring the beaches and help us collect valuable data for our efforts to conserve our local sea turtles,” Bernhard said. “We truly could not have done it without them!”