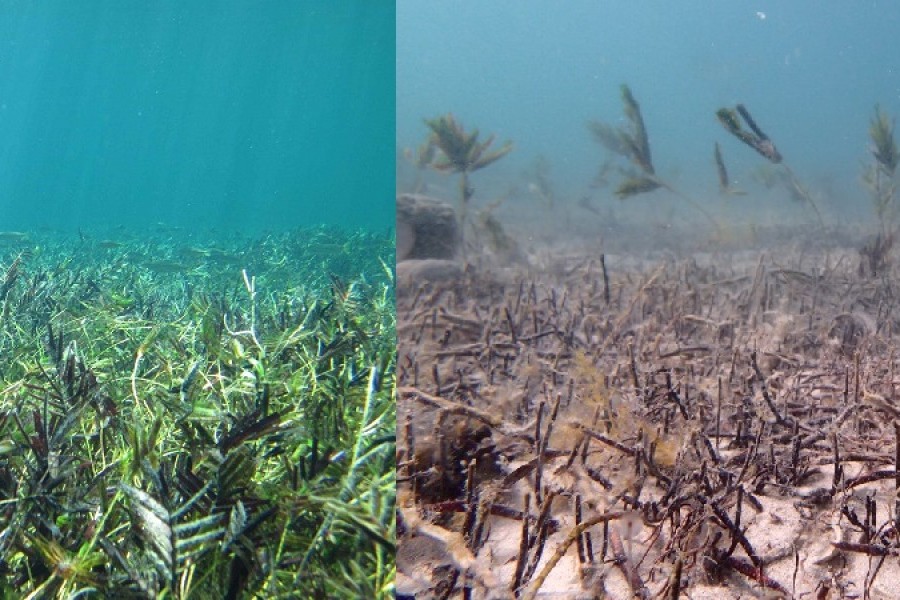 Massive seagrass beds in Western Australia’s Shark Bay — a UNESCO World Heritage Site — haven’t recovered much from the devastating heat wave of 2011, according to a new study demonstrating how certain vital ecosystems may change drastically in a warming climate.

Shark Bay earned its World Heritage status, in part, because of its 1,853 square miles (4,800 square kilometers) of seagrass beds, which UNESCO’s website calls the “richest in the world.” This vast, subtropical ecosystem hosts thousands of large sharks, other fish, sea turtles, bottlenose dolphins and a critical population of dugongs, plant-eating mammals related to manatees.

“We were studying a relatively pristine ecosystem, but in summer 2011 we had the hottest water temperatures on record at the time, and we saw 70-90 percent losses of seagrasses at our study sites; no one expected it to be that bad,” Nowicki said. “After our colleagues documented the losses, we wanted to know how much the ecosystem might recover over a few years. If you take a punch and get up quickly, you’re ready for the next punch. But our study has suggested this system took a punch, and in the short term, it has not gotten back up.”

The researchers surveyed 63 sites in Shark Bay four times between 2012 and 2014 to assess seagrass recovery and changes. Before the heat wave, many sites were dominated by the temperate seagrass known as “wireweed” (Amphibolis antarctica), whose dense and tall thickets provide ample food and shelter for numerous species. The heat wave drastically thinned many wireweed beds, and in many places their rhizomes (underground stems) blackened and died, leaving bare sand.

The new study showed that surviving A. antarctica beds appeared stable but didn’t reclaim much turf. Instead, the tropical seagrass Halodule uninervis, a close relative of the shoalgrass native to Florida, began filling the gaps. H. uninvervis was spotted at 2 percent of sites in 2012, but had expanded to almost 30 percent of them by 2014.

“The seagrass hit hard was the most common species — and was dense like a mini forest,” said Heithaus, doctoral advisor to Nowicki and co-author of the study. “Losing that cover is really huge; it’s like going from a bushland in Africa to a well-mowed lawn.

Losing that much structure has consequences. “After the die-off, we also saw water clarity go down a ton,” Nowicki said. Fewer seagrasses were available to trap sediments, and decaying seagrass may have nourished a bloom of microscopic algae observed in 2014. Study authors say these consequences aren’t surprising, given the valuable ecosystem services healthy seagrass beds provide.

Seagrass beds stabilize sediments, preventing erosion and clarifying water. More seagrass biomass can store more carbon dioxide, decreasing its availability to harm ecosystems through climate change and ocean acidification. Dense seagrass beds are also critical for economically important fisheries. Seagrass meadows are valued at $1.9 trillion worldwide just for their role in cycling nutrients, according to a 2009 study by others in Proceedings of the National Academy of Sciences. However, major seagrass ecosystems around the world have declined by about 7  percent per year since 1990, reminiscent of declines in coral reefs and other critical ecosystems.

In Shark Bay, beds of slow-growing A. antarctica seagrass may struggle to recover further, the study suggests. Shark Bay, located where temperate and tropical ecosystems overlap, is among the warmest areas that A. antarctica can occupy, and extreme warm temperatures are predicted to become more common with climate change.

Because of its temperate-tropical overlap, Shark Bay has a diverse group of about 12 seagrass species — roughly twice as many as the entire state of Florida. Its diversity survives, along with other key features that helped earn the site’s World Heritage status.

It’s critical to continue investigating how the recent loss of some seagrass, a basis of the marine food web, will affect plant-eating animals and their predators in Shark Bay.

Some take-home messages are clear: It’s critical to monitor ecosystems well after a disturbance; they’re not guaranteed to bounce back. “It shows the importance of these long-term, comprehensive, ecosystem-level studies,” said Heithaus, referring to team efforts to study Shark Bay. “If we hadn’t been doing this since 1997 we wouldn’t have had the baseline data to know that the declines were a big deal.”

Also, if relatively pristine seagrass beds of Shark Bay are vulnerable to extreme weather, then it’s unclear how seagrass beds damaged by human activity will fare in the coming decades.

Nowicki says that minimizing local stressors, such as nutrient pollution from fertilizer runoff into bays and estuaries, may give seagrasses better odds amid climate change and other global stressors.

Said Nowicki: “If Shark Bay had poorer water quality, we might have lost a lot more.”