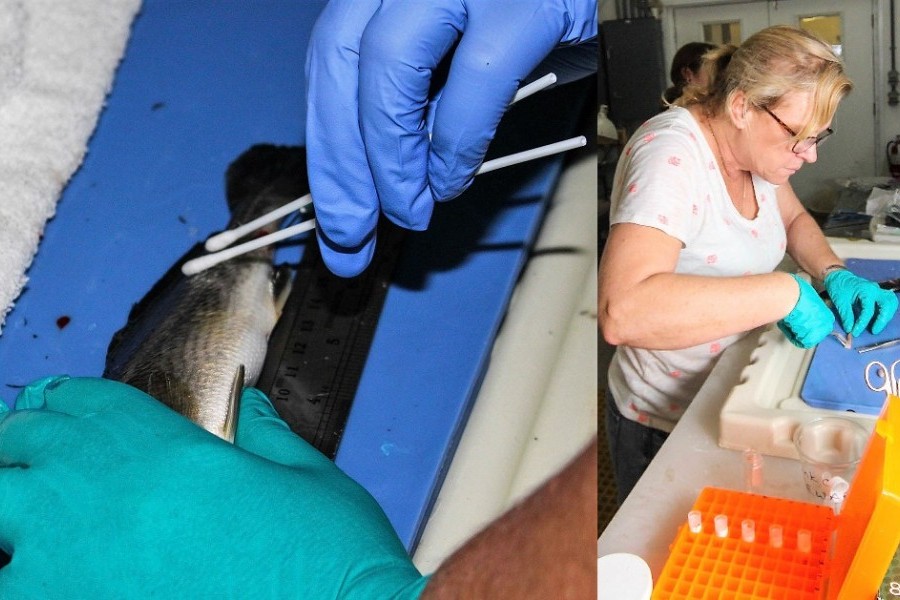 Thursday, April 20, marks the 7th anniversary of the Deepwater Horizon oil rig explosion in the Gulf of Mexico. The initial explosion killed 11 workers, triggering a cascading series of equipment failures leading to the largest oil spill in U.S. history, spilling 210 million gallons of oil over 87 days.

Since the spill, the C-IMAGE consortium centered at the University of South Florida-College of Marine Science, funded by the Gulf of Mexico Research Initiative (GoMRI), and including scientists from Mote Marine Laboratory and institutions around the world, has expanded the understanding of oil spills. C-IMAGE partners are studying the impacts on an ecosystem after an oil spill, revealing the behavior of oil under high-pressure, and predicting the health and reproduction of fish after large spills.

Mote continues investigating how specific levels of oil components affect fish under highly controlled conditions in the lab. These lab studies rigorously examine oil-related changes in immune and reproductive health, viability of offspring and other traits important for maintaining Gulf fish populations; lab results provide important baseline data to better interpret and help “decode” research findings from wild fish sampled during and after the spill. Together, lab and field studies aim to provide a head start in understanding threats to the health of Gulf fisheries for decades to come.

Two Mote-led studies are revealing how oil can affect Gulf of Mexico fishes in the lab — to help interpret possible impacts to fish exposed to oil in the wild. Most importantly: The levels of oil used in the lab study did not kill the fish outright, but they had subtle impacts on vital functions such as the ability to effectively reproduce and the immune system processes needed for health. Understanding such “sublethal” impacts in the lab is critical for detecting them in wild fish and sustaining fish populations.

Over four days, the liver of oil-exposed red fish (red drum) accumulated total polycyclic aromatic hydrocarbons (oil components) two orders of magnitude higher than their pre-oil status. The researchers characterized the gene expression in those same exposed fish, finding significant differences in expression that indicate both immunosuppression and increases in oxidative stress in the liver from this exposure.

Not all fish respond to oil the same way. Red fish in the Mote study exhibited different immune responses than those reported from other fish species exposed to oil, illustrating the complexities in understanding the sustainability of fisheries and their ecosystems.

Beneath the Horizon chronicles strong ties between people and spills

In addition to environmental impacts, personal and economical effects remain across the Gulf. On the 7th anniversary, April 20, C-IMAGE is releasing Beneath the Horizon, an interactive oil spill timeline examining the consequences of the two major oil spills in the Gulf of Mexico: The 2010 Deepwater Horizon oil spill in the northern Gulf and the lesser-known 1979 Ixtoc oil spill in the southern Gulf.

Beneath the Horizon features scientists who have devoted their lives to studying the spills and residents who lived through them, and explores how the environment and people cope with disaster and what we can expect for recovery in the future. To learn more, please visit beneaththehorizon.org.