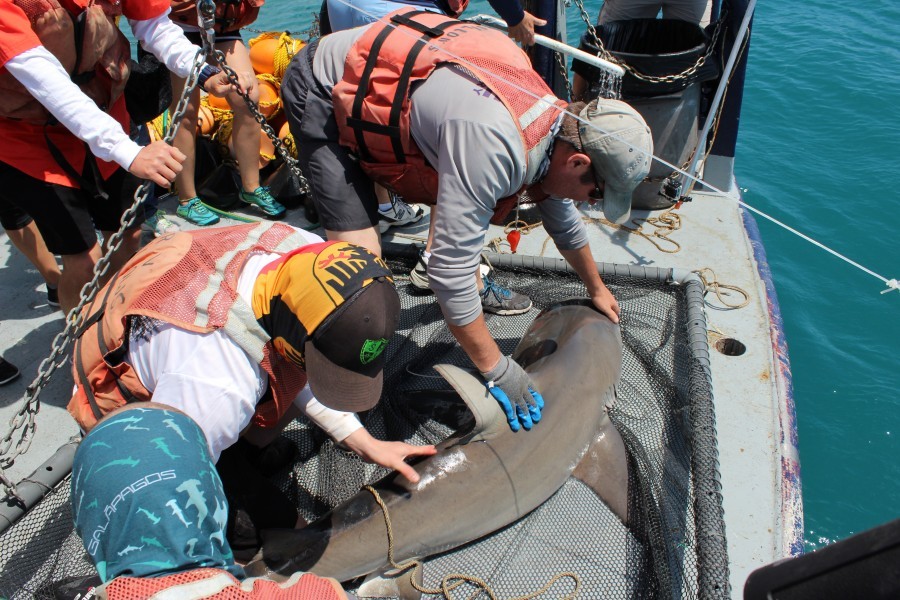 The team attached identification tags to 21 blacktip sharks, including 10 females revealed to be pregnant by ultrasound; six bull sharks; three blacknose sharks; and four tiger sharks. Of those, one blacktip and five bull sharks received acoustic tags that will ping when the sharks pass underwater receivers in bay passes, and one bull shark and one tiger shark were tagged by TNC scientists with satellite transmitters to track their migratory movements in the Gulf.

The cruise, conducted on the Florida Institute of Oceanography ship R/V Bellows, was designed to enhance knowledge about the shark species using southwest Florida’s coastal habitats. Data from acoustic and satellite tags, and recaptures of conventional (plastic) ID-tagged sharks, are important for understanding shark populations in the Gulf of Mexico overall, and they can be compared with past data to investigate possible changes over time. Multiple shark species are valuable to Gulf fisheries and to ecosystems where they serve as top predators in the food web, maintaining a healthy community.

“It’s amazing how many studies we supported in a five-day trip, while also giving two groups of college students an exciting, hands-on learning experience,” said Dr. Jayne Gardiner,  Assistant Professor of Biology at New College of Florida. “The group fitted sharks with advanced tags and collected data and samples to serve multiple projects at our institutions and elsewhere. Blood samples and ultrasound results will support studies of shark pregnancy by our colleagues at University of North Florida, and clips of fin tissue will support assessments of genetic diversity. Our catch, release and tagging efforts provided data for studies of habitat use. One of my interests is why sharks locate and use certain habitats, such as nurseries where young sharks start their lives.”

Along with tagged sharks, some species (such as nurse sharks) weren’t targeted for tagging and some weren’t brought aboard the boat, but they all provided data on abundance of different species. In total, 54 sharks were caught on 399 hooks — about one shark every seven hooks — which participants call a fairly good catch per unit effort and potentially a good sign for shark populations.

Participant Dr. Robert Hueter, Senior Scientist at Mote Marine Laboratory, said: “The catch data add to Mote’s Center for Shark Research's database going back more than 25 years, examining the relative abundance of shark species in southwest Florida coastal waters. The relatively high catches last week are a good indicator of the resurgence of depleted shark populations following 25 years of fisheries management designed to achieve sustainability of these populations. Also, the conventional and electronic tagging will add to our knowledge of where these animals go, when, and what critical habitats they need to survive.”

Blacktips sharks, the most abundant catch, are fished commercially and recreationally but their populations are faring better than those of many other large, coastal sharks. Gardiner notes that studying the life history of this successful species may provide clues for understanding and conserving other species that aren’t faring as well.

Dr. Jorge Brenner, a Marine Scientist with TNC studying the blueways (migratory corridors) of megafauna in the Gulf, was responsible for satellite tagging two sharks during the cruise. A juvenile male tiger shark (5.7 feet / 175 cm long) nicknamed “The Judge” was tagged April 18, and since then he has traveled more than 70 miles offshore. See this shark’s tracking data at http://tinyurl.com/tnc-sharks​. A juvenile female bull shark (6.5 feet / 200 cm long) nicknamed “Miss Lillie” was tagged on April 20 and scientists are waiting for her tag to report its location.

This work highlights the collaboration between Mote and TNC in assessing the status and pathways of migratory sharks. The two institutions recently signed an agreement for collaboration in research and conservation in the wider Caribbean region.

“Assessing the migratory pathways of these juvenile sharks will allow us to understand what habitats are essential for their development in the Gulf of Mexico and identify opportunities for their conservation,” Brenner said. “Additionally, we hope this research will support a current Mote study on the interaction between bull sharks and one prey animal, juvenile bottlenose dolphins, since bull sharks were fitted with acoustic tags to assess their fine-scale movements in Sarasota Bay.”

Krystan Wilkinson, the Sarasota Dolphin Research Program's Ph.D. student with University of Florida, was involved in tagging and tracking bull sharks during this cruise to support her doctoral research on shark-dolphin interactions, building on her master's degree research on the interactions between sharks and bottlenose dolphins of Sarasota Bay. There, the Sarasota Dolphin Research Program — a program of the Chicago Zoological Society (CZS) in collaboration with Mote — leads the world's longest running study of a wild dolphin population. Wilkinson's work is supported in part by funds from a donor to CZS.

By assisting the researchers, students from Eckerd College and New College got an experience that no classroom lecture could rival.

“This trip was a once-in-a-lifetime opportunity for most of the students involved,” said Dr. Bill Szelistowski, Associate Professor of Marine Science and Biology at Eckerd College. “Afterward they told me it was amazing and incredible to see large sharks up close, participate in real research at sea and use the latest technology to reveal answers to mysteries about sharks and the ocean.”

Said Hueter: “Healthy shark populations are good for a healthy ocean, and all of us, whether we live on the coast or not, need a healthy ocean to keep our planet flourishing.”