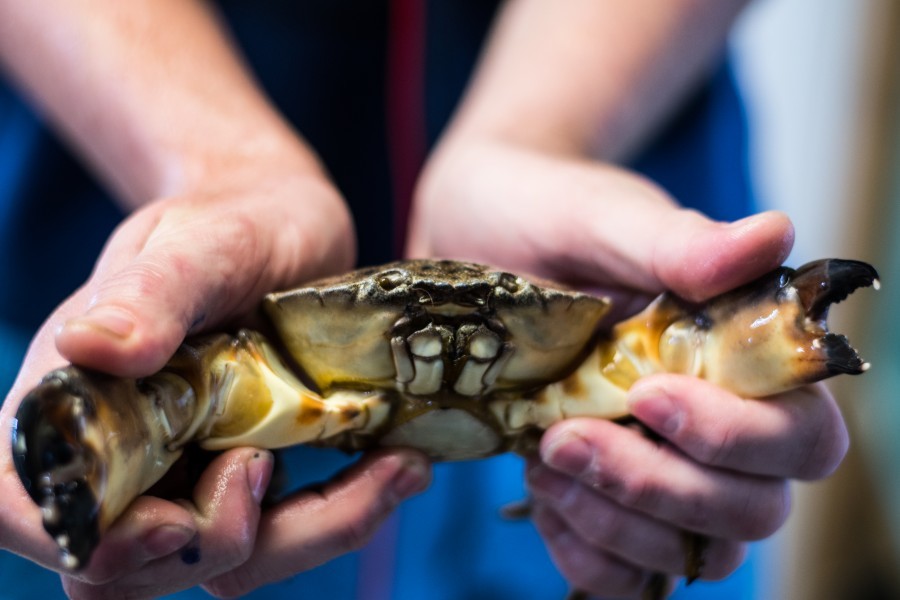 The first study on Florida stone crabs and ocean acidification was published this month by a Mote Marine Laboratory scientist and offers clues for relieving environmental stress on these tasty and economically valuable crabs.

The study in the peer-reviewed Journal of Experimental Marine Biology and Ecology provides the first evidence that stone crab embryos develop more slowly and fewer eggs hatch to larvae (babies) in controlled laboratory systems mimicking ocean acidification (OA) — a chemically induced decrease in ocean water pH at global to local levels that is being driven by increased levels of carbon dioxide in the atmosphere.

The impact of OA to marine and estuarine species and habitats is worsened when combined with the impacts of nutrient-rich coastal runoff, sewage water inputs and loss of wetlands due to coastal development. Some coastal habitats in Florida are experiencing seasonal declines in pH three times faster than the rate of OA anticipated for global oceans by the end of the century.

Most stone crab fishing occurs in coastal habitats susceptible to OA along with other potential stressors including reduced oxygen levels and harmful algal blooms. The stone crab industry — centered along west Florida — was valued in 2015 at $36.7 million, but since 2000 the average annual commercial harvest has declined by about 25 percent.

“By identifying stone crabs’ susceptibility to ocean acidification throughout their embryonic and larval development, we can better understand whether the species will be able to tolerate and eventually adapt to the levels of ocean acidification projected for our coastal oceans in the future,” said Mote Postdoctoral Research Fellow Dr. Philip Gravinese. Gravinese authored the new paper to disseminate his doctoral research, which was conducted through Florida Institute of Technology in 2012 at Mote’s campus on Summerland Key, Florida. “Stone crabs brood their eggs in coastal habitats, and their larvae hatch and develop into juvenile crabs — essential steps toward producing the next generation of adult crabs whose claws will be harvested. These early life stages are sometimes more sensitive to changing environmental conditions.” 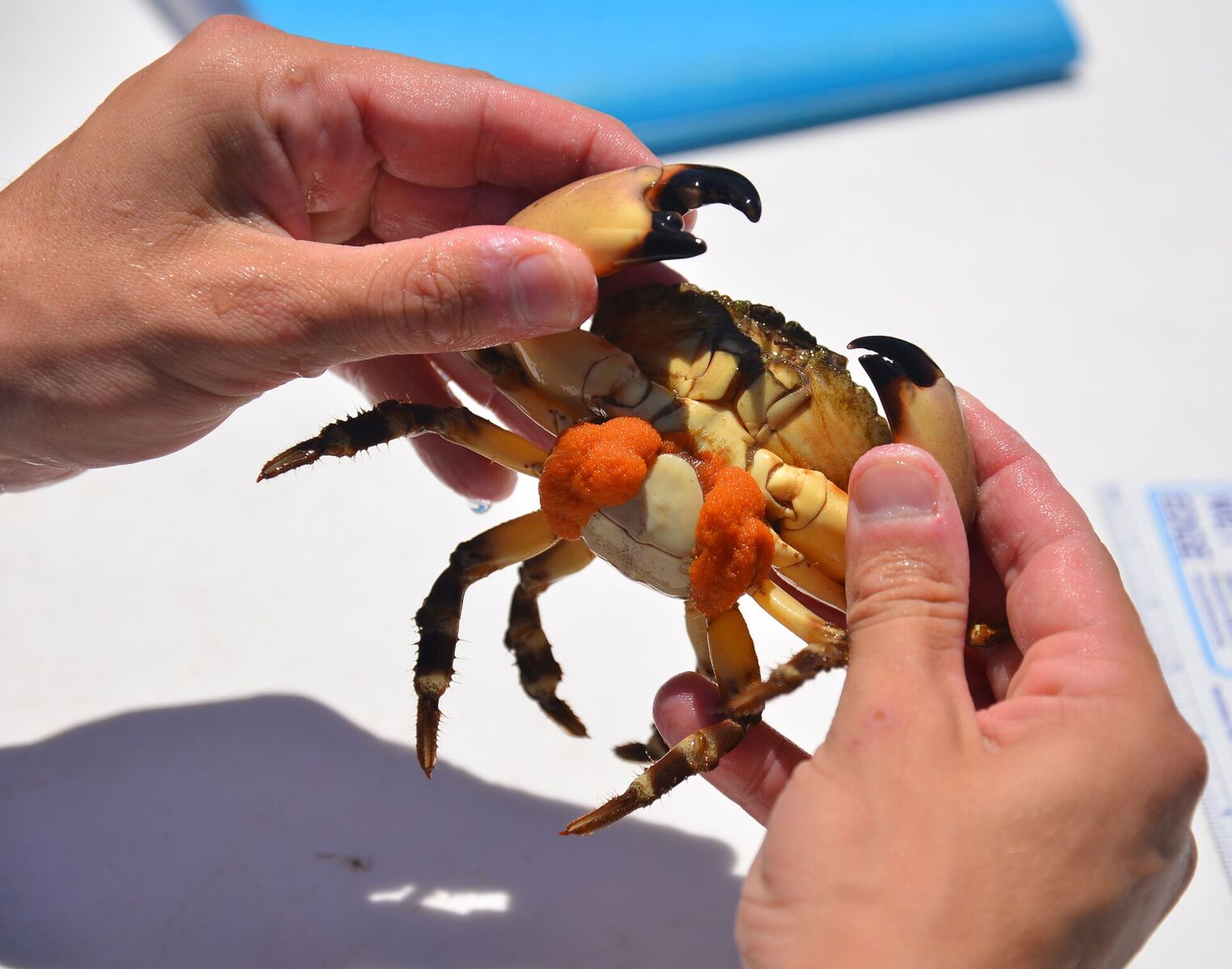 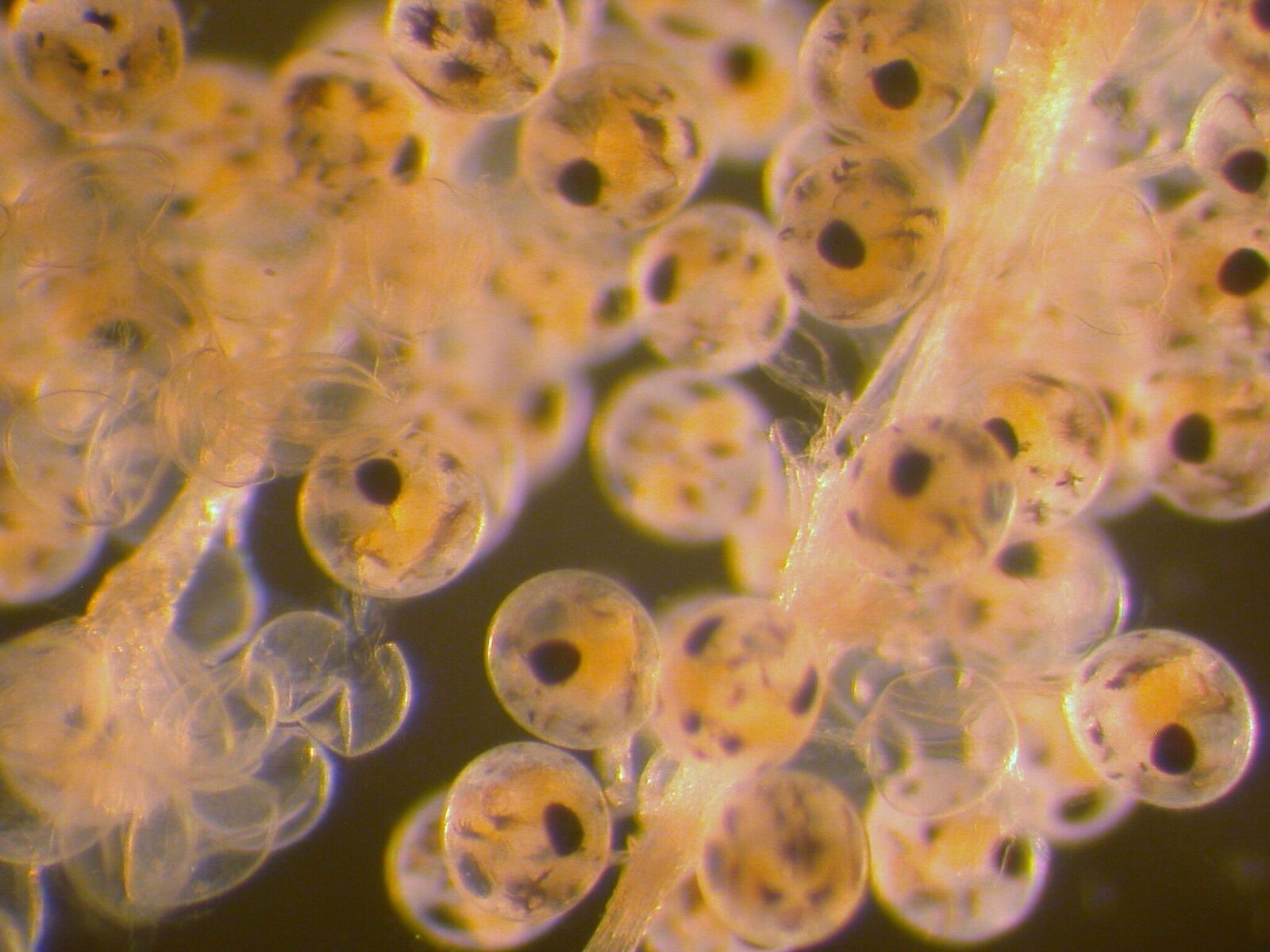 Gravinese conducted the first-ever laboratory study on OA and stone crabs with funding support from the Protect Our Reefs license plate grant program administered by Mote (motereefplate.com), and from the Department of Biological Sciences at Florida Institute of Technology.

With assistance from the Florida Fish and Wildlife Conservation Commission, Gravinese obtained 16 egg-bearing stone crabs from commercial traps within 10.5 miles (17 kilometers) of Florida’s coast. He used only females carrying orange eggs — rich in yolk not yet consumed by the early-stage embryo. He placed eight crabs into tanks with acidified seawater mimicking pH conditions forecasted by some models for the ocean’s future and eight into tanks with present-day pH seawater.

Each day, Gravinese sampled 20 eggs from each female’s brood, which contains hundreds of thousands of eggs. He determined each embryo’s stage of development by examining the eggs’ yolk content, eyespot size and egg volume. Gravinese also examined about 100 larvae from each brood to document how many hatched successfully, and he sampled 20 hatched larvae per brood to document any deformities using digtal photos magnified 25 times. Throughout the experiment, Mote scientists monitored and tested the water temperature and chemistry features to maintain stable, controlled conditions in the Ocean Acidification Flow-Thru Experimental Raceway Units at Mote’s Summerland Key campus.

The results revealed that young stone crabs may struggle as the oceans acidify.

“The stone crabs’ embryonic development slowed by 24 percent and hatching success decreased by 28 percent with exposure to lower pH in this study,” Gravinese said.  “This could represent a reduction in the supply of larvae (baby stone crabs) and a potential bottleneck for new recruits into the fishery.” Larvae from both study groups appeared normal in size and shape, but it remains to be seen whether longer exposure to low pH water would cause changes over time.

While broods in acidified water had fewer eggs hatch on average, their hatch success varied more widely than that of broods in the present-day pH water.

“The fact that some individual females’ broods showed variability could suggest that there’s a genetic component that may help some crabs be more tolerant than others of ocean acidification,” Gravinese said.

“It’s hard to say, because no one has correlated pH in larval habitats with their abundance,” Gravinese said, noting an option for future research. “We do know coastal areas are changing, some with pH dropping significantly, but there are also other environmental changes that may be playing a role — including hypoxia, or low oxygen levels, elevated seawater temperature, and Florida red tide.”

At Mote’s City Island research campus in Sarasota, Florida, Gravinese’s recent lab studies have involved monitoring female crabs throughout their entire process of producing and fertilizing eggs in acidified water, to check for “generational carry-over effects” (from mother to larvae) on larval development, hatching success and larval survival. This study could identify a potentially greater resilience to future acidification. Gravinese and colleagues have also been examining juvenile crabs’ ability to forage for food under low oxygen and elevated temperature scenarios.

In late 2017 to early 2018, a number of Florida’s commercial fishers anecdotally reported fewer stone crabs in their traps. The specific reasons remain unclear, as stone crabs not only face mounting threats, but harvests naturally vary from year to year, and it’s challenging to gauge the impacts of storms, cold fronts, octopus predation and other environmental variables.

“The fishery has good and bad years, in what appears to be a repeating pattern, but the overall trend in the annual harvest seems to be negative,” Gravinese said.

However, he noted that research on different life-history stages may allow for better strategies to reduce pressure on stone crabs. For example, communities can strengthen efforts to reduce nutrient-rich runoff and sewage water inputs that will likely exacerbate OA.

Here are a few tips to reduce runoff:

Check out other watershed-friendly tips from the Science and Environment Council of Southwest Florida.