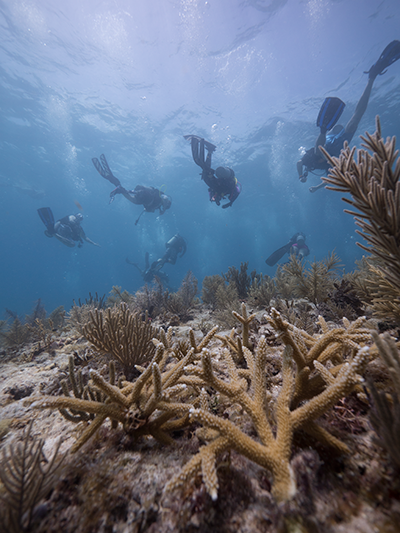 Mote Marine Laboratory is excited to announce it will host the first-ever Sarasota area chapter of SCUBAnauts International, which guides young men and women, ages 12 through 18, along an exciting pathway for personal development by involving them in the marine sciences through underwater marine research activities such as special environmental and undersea conservation projects that build character, promote active citizenship and develop effective leadership skills.

Interested teens in the greater Sarasota-Bradenton area and at least one of their parents are invited to attend an orientation meeting at Mote starting at 6:30 p.m. Wednesday, March 1, 2017. The meeting will be located in Mote’s Buchanan conference room located on the third floor (1600 Ken Thompson Parkway, Sarasota, FL).

“Mote is pleased to host the first-ever Sarasota chapter of SCUBAnauts International,” said Dr. Michael P. Crosby, Mote President & CEO. “This organization’s goals coincide with Mote’s mission of using scientific research and education to address the profound challenges marine ecosystems face worldwide. I have worked with SNI for several years and looking forward to connecting our local teens in this new chapter.  SNI members represent some of the best in the next generation of leaders in our community and in science-based ocean conservation.”

“Everyone who plants coral is a Mote volunteer citizen scientist that is not only helping us restore the coral reefs but helping us gather data and conduct the science that is essential to restore coral reefs,” Crosby said.

Paul’s daughter, Mia, who is involved in the organization, said,”I’ve been with this organization since I was 11-and-a-half years old. I started that young because my brother was involved. I would go to the meetings and sit in the back and once they got to the science presentations I thought it was just so cool, but I never really thought about what was under the water. After joining, I’ve learned so much more about how important our marine environment is and I love to be able to teach other kids how much the ocean affects our everyday life.”

About SCUBAnauts International
SCUBAnauts began in 2001 with six dedicated teenagers (Andrew, Brynn, Jennifer, Julie, Ryan and Alex), each of whom were certified in Basic Open Water SCUBA by YMCA SCUBA Instructor Jeff Paine in May 2001. As part of Capt. Olson’s quest for these SCUBAnauts to use SCUBA while learning about the marine environment, several local marine scientists were contacted to support and assist in this endeavor. These connections contributed to what SCUBAnauts is today.

The mission of SNI is to guide young men and women, ages 12 through 18, along an exciting pathway for personal development by involving them in the marine sciences through underwater marine research activities such as special environmental and undersea conservation projects that builds character, promotes active citizenship, and develops effective leadership skills. Learn more at scubanautsintl.org.