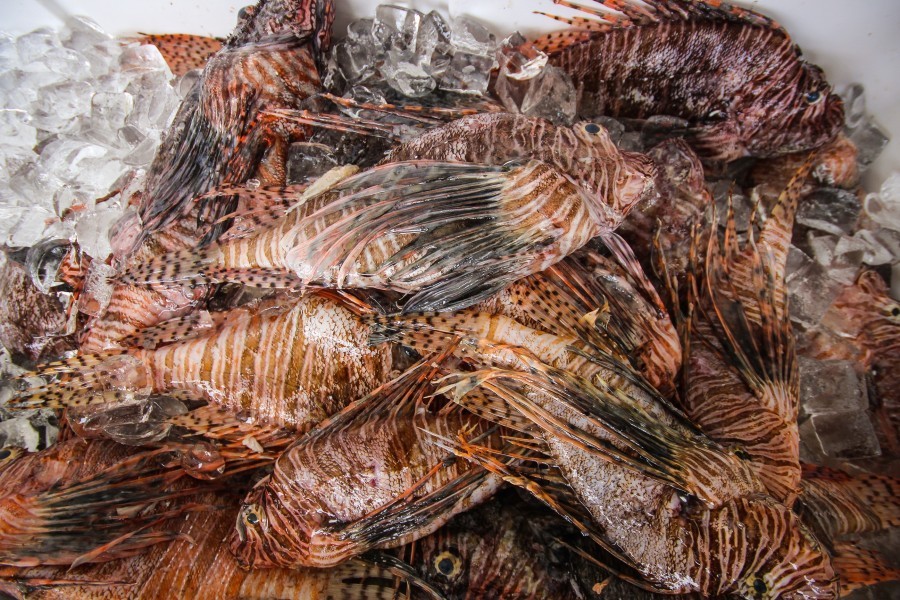 Lionfish caught during the Sarasota Lionfish Derby are on ice during the culminating event on July 10 at Mote Marine Laboratory. 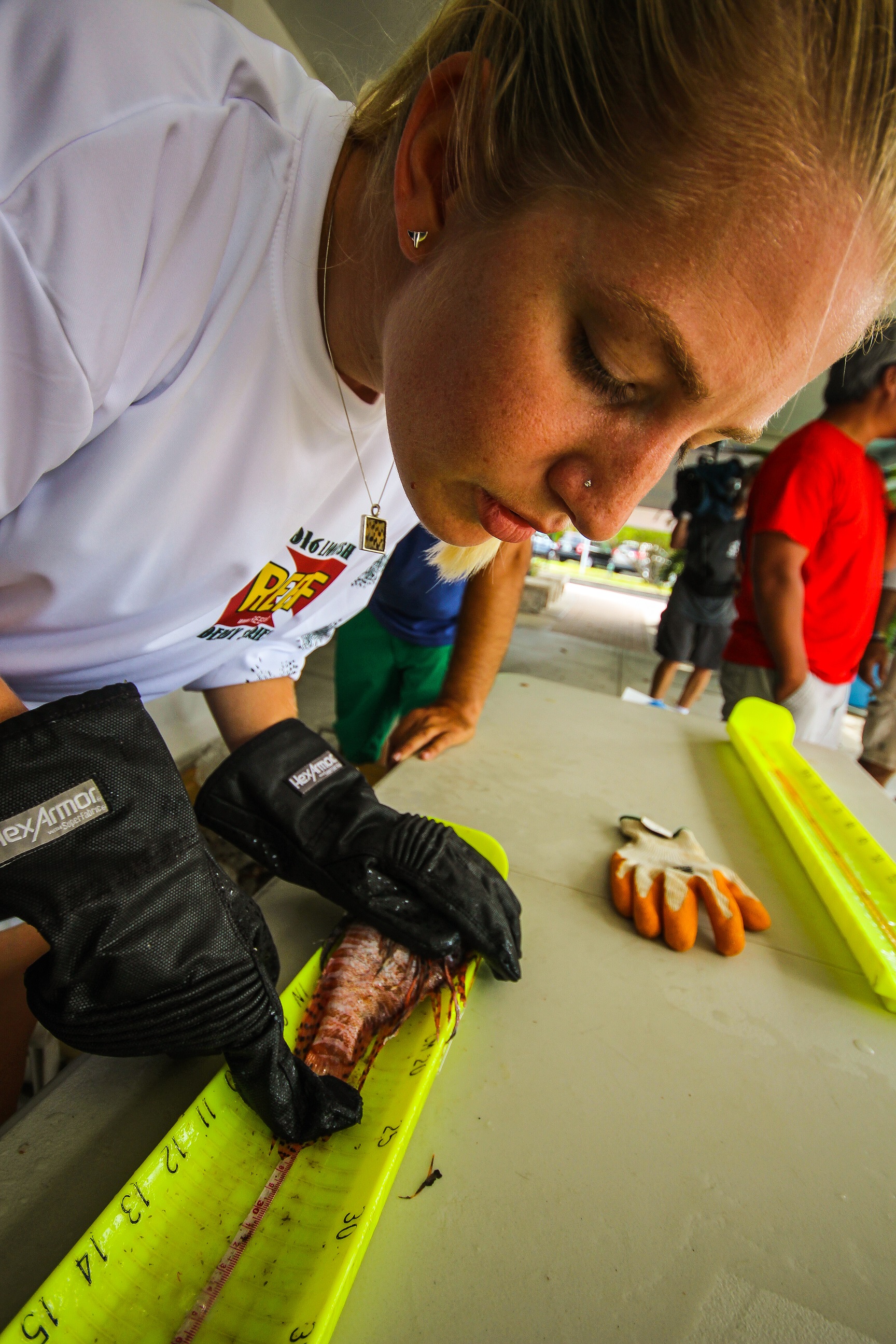 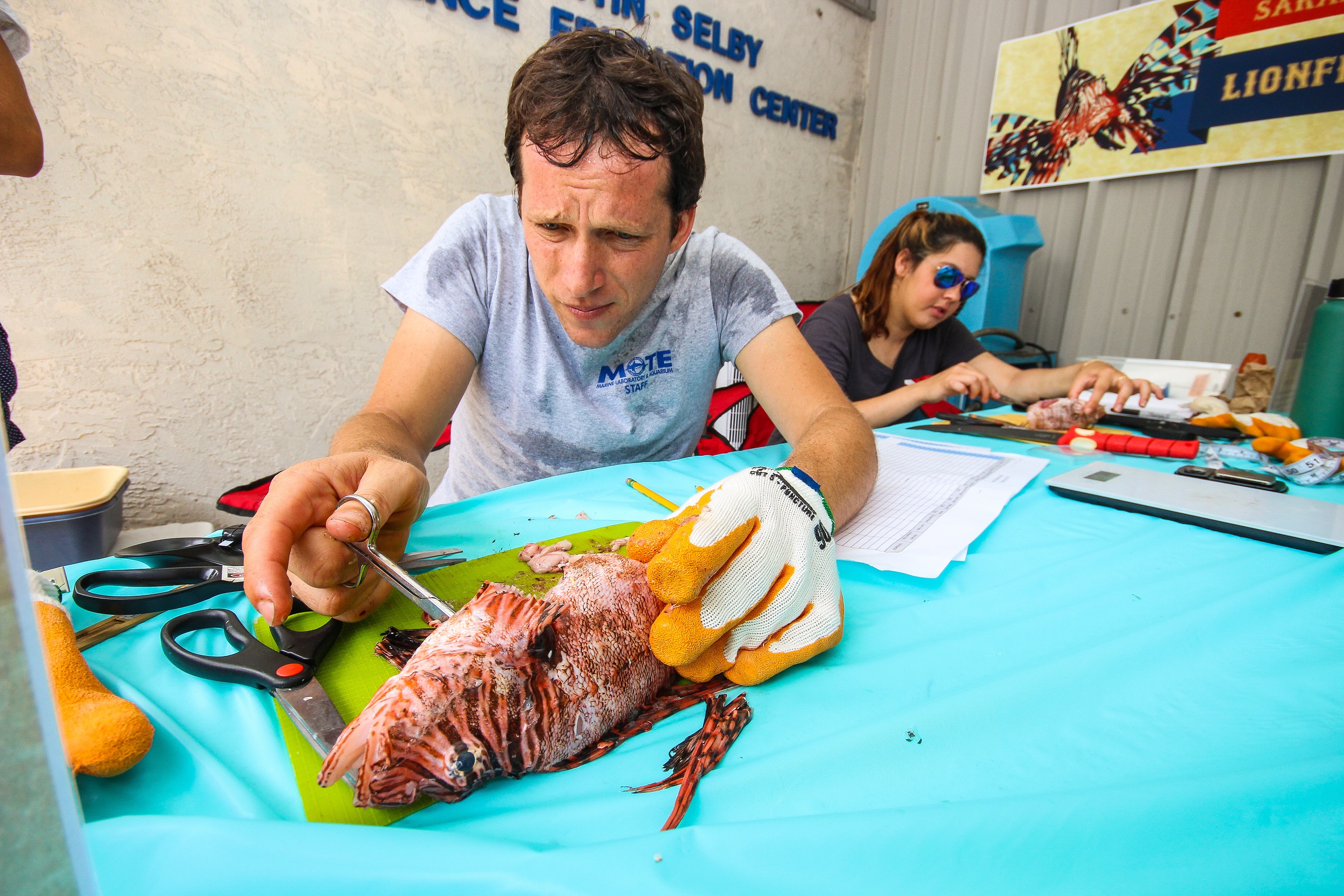 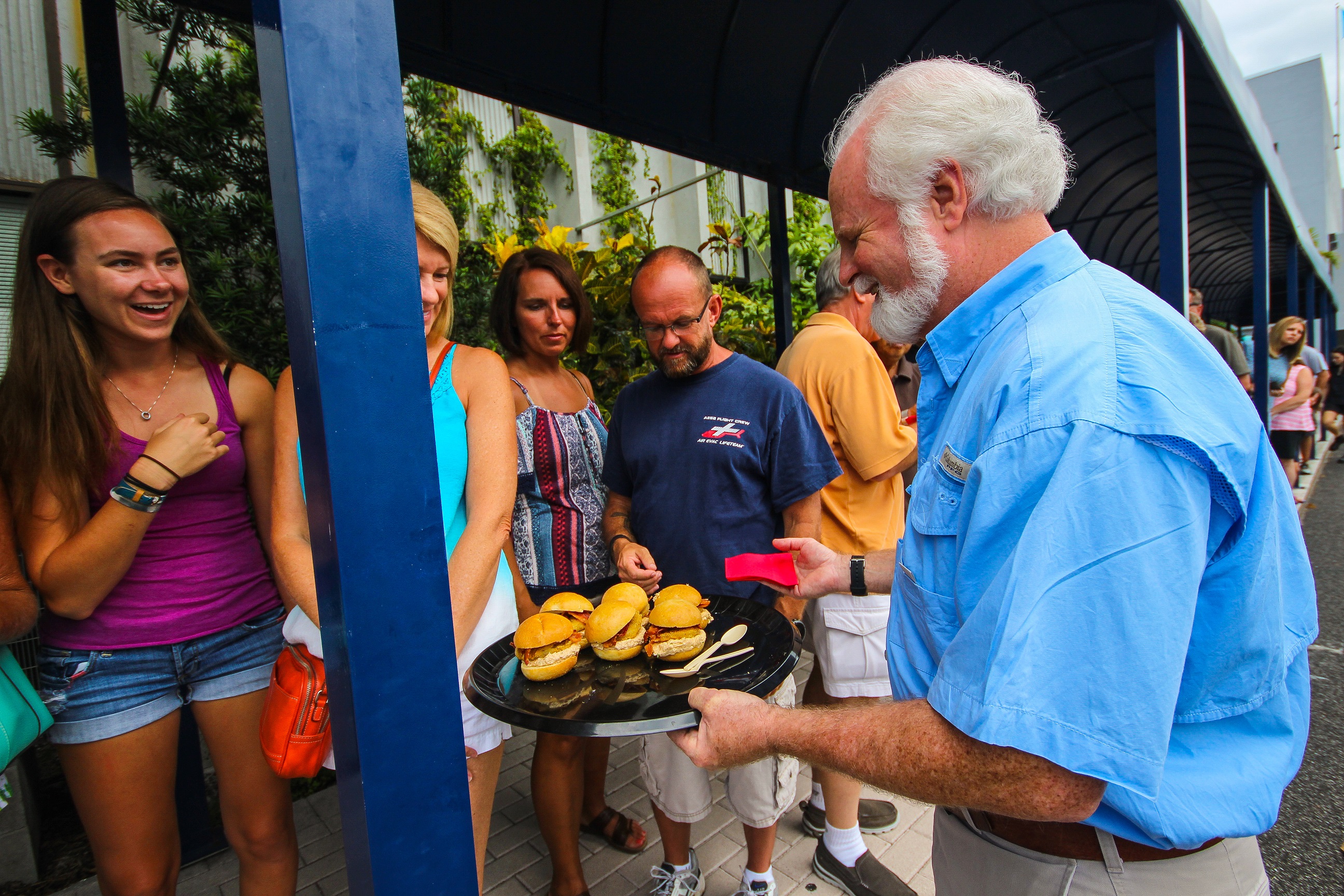 Divers removed 429 invasive lionfish from the Gulf of Mexico during the third annual Sarasota Lionfish Derby, which drew more than 300 visitors to its culminating event today, July 10, at Mote Marine Laboratory.

The Sarasota, Florida-based derby was a partnership effort among Mote, a world-class marine science institution, Reef Environmental Education Foundation (REEF), which helps study and address the lionfish invasion and sanctions official Lionfish Derbies, and ZooKeeper, the leader in lionfish containment throughout invaded areas. This was the first derby in the 2016 Summer Lionfish Derby Series coordinated by REEF. Three upcoming derbies are accepting registrations at: www.reef.org/lionfish/derbies.

During the Sarasota derby from July 8-10, six teams of 19 Florida divers vied to catch the most lionfish, the largest lionfish and the smallest lionfish in Gulf of Mexico waters ranging from Collier to Escambia County.

On July 10, more than $3,500 in total cash prizes were awarded to first, second and third place winners in each category during an awards ceremony that filled Mote’s WAVE Center to capacity. Leading up to the ceremony, top local chefs from Indigenous Restaurant, Mattison’s Restaurants & Catering, Seafood Shack and Beach House prepared tasty lionfish dishes for the public.

Derby winners are below.

The Indo-Pacific lionfish (Pterois volitans) has invaded coastal habitats of the western Atlantic Ocean over the past two decades and has the potential to cause major ecological changes in reef fish communities. These efficient predators are venomous, reproduce frequently and year-round, and they pose a major threat to Florida’s native species and ecosystems. They consume more than 120 different species of fish and crustaceans, and in heavily invaded areas they have reduced fish populations by up to 90 percent and continue to consume native fishes at unsustainable rates.

The Sarasota Derby culminated today, Sunday, July 10, with a celebration on the premises of Mote on City Island, Sarasota. There, the public visited educational booths about lionfish, checked out gear designed to capture them and watched lionfish be counted and measured by REEF staff and dissected by Mote scientists.

“We’re measuring all these fish and then removing the stomach contents so we can more specifically identify the food items in their stomachs, and if we can’t identify them visually, we’ll DNA barcode them later,” said Dr. Jim Locascio, manager of Mote’s Fisheries Habitat Ecology Program. “We want to know exactly what they consume and what proportion of the prey are important commercially and recreationally. The general story is that these lionfish consume everything, but some fishes are more important to us – snapper, grouper, things we invest a lot in managing.”

“Beyond the Gulf of Mexico, we are also interested studying lionfish in their native habitat, the Red Sea, where very little is known about their ecology and behavior,” said Dr. Noam Josef, a postdoctoral research fellow at Mote who is working with colleagues from Ben Gurion University in Israel to study the spatial distribution, movement, behavior and ecology of lionfish in the Red Sea. “Such a pioneering study, along with efforts in the Gulf, may yield insights on resiliency and weak points of lionfish, along with potential insights on how to sustain populations of the native fishes affected by the invasion. The physical characteristics we measure at this derby will be compared with those from native populations. Comparative studies may be key to understanding what made this species such a successful invader."

“We’ve had a pretty amazing turnout, and I’m glad we teamed up to do this,” Phelps said. “I think the awareness of lionfish has gotten so big, chefs are paying attention, and we’re educating a whole city. By the end of today, more people will have learned about it.” Phelps used sea purslane grown in the sustainable, marine aquaponics system at Mote Aquaculture Park in his lionfish ceviche dish during the event.

Once the derby results were in, REEF staff kicked off the awards ceremony with a raffle, and Mote President & CEO Dr. Crosby welcomed guests.

"Mote is thrilled to be hosting this successful, third annual Sarasota Lionfish Derby,” Crosby said. “We’ve gone from about 60 people attending last year’s derby to over 300 people today. This is possible because of the wonderful partnership between Mote, REEF, ZooKeeper and the dive teams that went out. Every one of you is a Mote volunteer citizen scientist, helping us gather data to study this invasive species. We’re having fun together and raising awareness, but Mote is first and foremost a research organization. With your help, we’re trying to provide the science to turn the tide of this invasion.”

"This is one of the best lionfish events we’ve seen in over nine years of doing these derbies,” said Lad Akins, Director of Special Projects at REEF. “Mote and its researchers really stepped up to the plate, and the teams, the chefs, the sponsors and the volunteers did a tremendous job. We broke a record – we had more lionfish from one, single team than any other team has ever brought to the Sarasota derby. You all really put a hurtin’ on the lionfish today.”

“I am amazed at the number of people who showed up today,” said Allie ElHage, owner of ZooKeeper dive safety products. “This has always been an event to educate and raise awareness among the public, and today we did what we’ve always worked to do.”

The public can help document the lionfish invasion by reporting sightings through REEF, U.S. Geological Survey or the Florida Fish and Wildlife Conservation Commission (FWC). FWC has a Report Florida Lionfish app available for smartphones. REEF also has a free Lionfish Sightings App for iPhone, which allows people to track and record lionfish sightings all around the invaded region.

Sponsors for the Sarasota Lionfish Derby at Mote