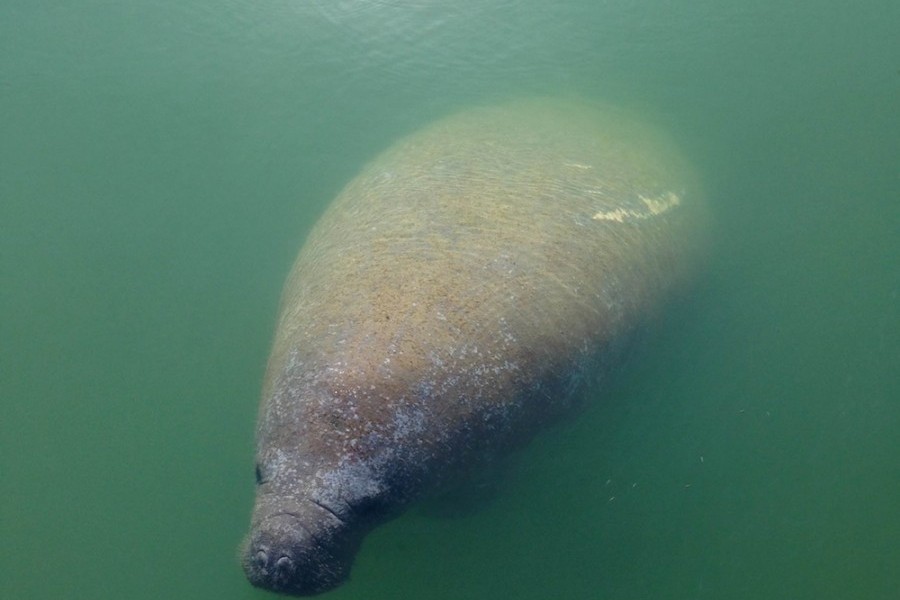 A manatee gave birth to rare twins this month in southwest Florida, say Mote Marine Laboratory scientists who confirmed the mother’s identity from a video and know her history from 23 years of observations.

On April 15, female manatee “Tomo-Bella” and her newborn twins were observed in Grand Canal along Siesta Key by members of the public. Onlooker Karl Nelson sent his video to Mote scientists, who identified the mother.

Mote scientists first observed Tomo-Bella in 1993 in Pansy Bayou near Lido Key. Since then, they have observed her 230 times in many parts of Sarasota Bay, along with Fort Myers during winter. In 1995, Mote documented Tomo-Bella with a calf — the first of eight she has been documented with so far. The 2016 calves are her first twins.

“We’re excited to see that Tomo-Bella is contributing to the manatee population, and it’s interesting to see twins from a female whose history we know so well,” said Jennifer Johnson, staff biologist with Mote’s Manatee Research Program.

Manatee twins are rare, born 1.4 to 4 percent of the time in Florida manatees (Trichechus manatus latirostris). While it is possible for a healthy mother to support twins, there is little data on how twin calves fare in the wild.

Southwest Florida residents might remember Tomo-Bella because she was rescued, along with her earlier calf, in 2012 from Grand Canal along Siesta Key. Staff from the Florida Fish and Wildlife Conservation Commission (FWC) and Mote rescued Tomo-Bella because she had a fresh wound on her head and was showing unusual behavior. She and her calf were rehabilitated at Tampa’s Lowry Park Zoo, and Tomo-Bella was found to have toxins from Florida red tide in her blood. In September 2012, mom and calf were released after successful rehabilitation. Mote helped FWC and Lowry staff return the manatees to the wild from a boat ramp at Ken Thompson Park on City Island, Sarasota.

“To me, it was interesting that she was rescued with a calf in Grand Canal along Siesta, and now she was seen there with her new twins,” Johnson said. “Manatees may go to quieter places to calve.”

Southwest Florida has all the habitat features necessary for manatees to thrive, including seagrasses and other vegetation that manatees eat, warm-water refuges they use during winter and suitable habitats for breeding and giving birth. Mote last documented Tomo-Bella on Jan. 25, 2016, in the Orange River in Fort Myers.

As waters warm and summer boating season draws nearer, it is especially important to protect manatees other large marine animals in Florida waters.

Within Sarasota or Manatee county waters, if you see a stranded or dead dolphin, whale or sea turtle, please call Mote's Stranding Investigations Program, a 24-hour response program, at 888-345-2335.