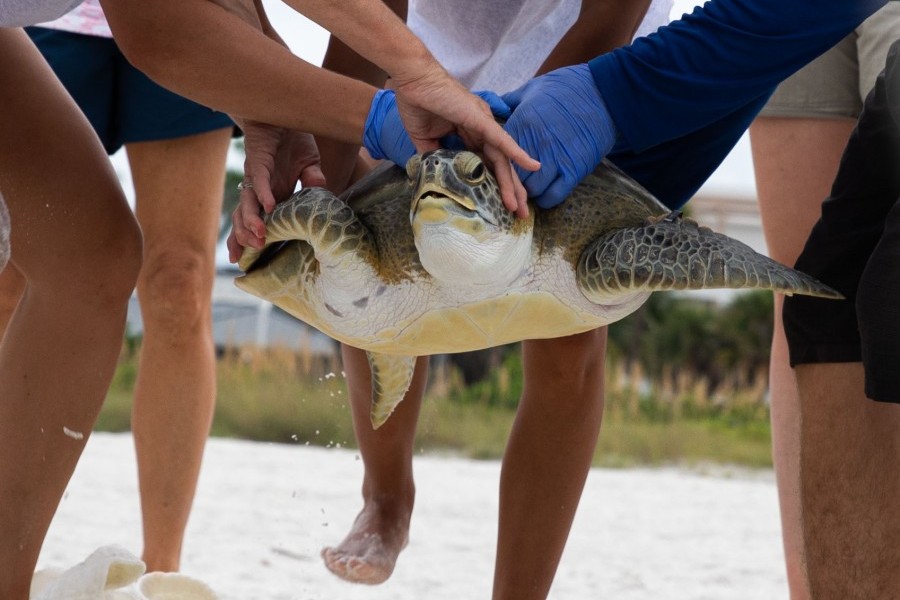 Waves was found entangled near the Seafood Shark Marina in Cortez, Florida with fishing line wrapped around its left front flipper and mouth. The turtle was also already missing its left rear flipper. Once transported to Mote’s hospital, Waves was examined, where it was determined the turtle had been entangled for an extended amount of time. Mote staff also discovered the turtle had ingested a spinner hook and was suffering from numerous fibropapilloma tumors.

After gaining use of their front left flipper, passing the hook and undergoing surgery to remove the tumors, Waves was cleared for release from Lido Beach.

“What we do every day has a huge impact on these animals,” said Gretchen Lovewell, Stranding Investigations Program Manager at Mote. “You can be a good environmental steward by making sure you stow fishing gear before you go and wearing polarized sunglasses to see animals in the water. All of these little things can pay huge benefits for these animals.”

If you see a distressed or deceased sea turtle, manatee, dolphin or whale in Sarasota or Manatee counties, report to trained responders immediately. Contact Mote’s Stranding Investigations Program via their 24-hour hotline at 888-345-2335. Below are additional tips:

When calling, be ready to provide a thorough description of the animal, its behaviors, and the location.
Take photos and video if possible.
Never attempt to rescue or push back any animal in distress.
For other Florida counties, call the Florida Fish and Wildlife Conservation Commission's (FWC's) Wildlife Alert Hotline at 888-404-3922.
In the southeastern U.S., call 877-WHALE-HELP (877-942-5343).