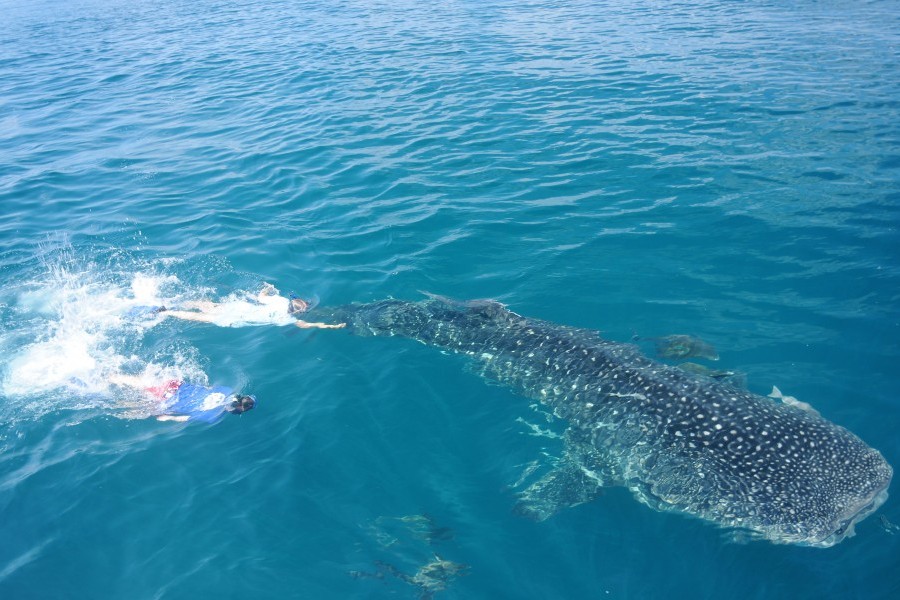 Mote scientists work to place a scientific tag on a whale shark in the Gulf of Mexico. Credit Kim Bassos-Hull/Mote Marine Lab

Mote Marine Laboratory scientists are excited to share news of a major study on whale sharks, Earth’s largest fish, led by ECOCEAN Inc., with co-authors from Mote and other institutions in more than a dozen countries.

The gist: Vital scientific information about whale shark behavior, biology and ecology were released Nov. 29 in the scientific journal BioScience, thanks to a 22-year citizen-science program enabling ecotourists and others around the world to photograph whale sharks for research, and ultimately, conservation. The project Wildbook for Whale Sharks invites the public to submit photos of whale sharks’ unique spot patterns to an online database, helping scientists identify individual animals. This effort has helped describe 20 hotspots for whale sharks around the globe and has expanded scientists’ understanding of these endangered sharks’ mysterious lives.

Read the news release from ECOCEAN Inc. and Georgia Aquarium below.

Scientists around the world are working hard to study whale sharks, but we can’t follow them everywhere they’re found, all the time. Thankfully, we have a growing number of “eyes and ears” on the water, as citizen-scientist divers across the globe submit photos and information to Wildbook for Whale Sharks. Their reports have significantly magnified our ability to study these animals, and we are pleased to share their data in a meaningful way through this BioScience study.

One of the most active whale shark hotspots discussed in the BioScience study is located off Mexico’s Yucatan Peninsula, where we and our Mexican colleagues began tagging and tracking whale sharks in 2003, publishing the first scientific journal articles on this unique, huge aggregation of the world’s largest shark. Since then, our knowledge has grown tremendously with help from divers contributing to Wildbook for Whale Sharks.

In particular, Wildbook photos and data have revealed more individual sharks at this Mexican hotspot than at any other known whale shark hotspot in the world. In essence, citizen scientists have helped confirm that this is truly a special place.

Photos submitted worldwide have revealed that about one-third of whale sharks return to a familiar place for at least two years, often more. These sharks aren’t aimless nomads — they make specific migrations to fulfill their survival needs, and the more we understand this, the better we can inform their management and conservation.

One of the most valuable results in the BioScience study is a world map of whale shark hotspots, indicating where the sharks are found and which places are connected by whale shark movements in between. This provides helpful clues to scientists planning more targeted studies of whale shark population structure and potential long-distance migration. It also is critical information for conservation of the species, revealing the population structure of this species on a global scale.

ATLANTA – Vital scientific information about whale shark behavior, biology and ecology is being uncovered by an unlikely source – ecotourists and other citizens. Thanks to modern advancements in technology and the burgeoning field of “citizen science,” new information about gregarious and mysterious whale sharks is being revealed in a study slated to publish on Nov. 29 in BioScience.

Whale shark habitat spans the globe, making long-term research over wide geographic ranges a difficult challenge for whale shark researchers. To address this challenge, researchers harnessed modern technology, creating an online photo database called Wildbook for Whale Sharks, and enlisted the help of ecotourists and citizens across the globe to upload any images of whale sharks they happened to see or encounter anywhere in the world. Photos of nearly 30,000 encounters representing 6,000 individually-identified sharks across 54 countries over 22 years has given scientists a rich data set to analyze and better understand the nature of this endangered species that has long been misunderstood and understudied.

Through this effort, researchers have now identified 20 whale shark aggregation sites globally, an increase from 13 identified prior to enlisting citizens in this scientific effort.

“This effort is increasing our knowledge of whale shark abundance and geographic range, trends in site fidelity and frequency,” explained the study’s lead author and Director of ECOCEAN Inc., Dr. Brad Norman. “That information is vital for prioritizing conservation areas for the species.”

Analysis of the images provided data on sex ratio, site fidelity and aggregation, hotspot sites, size and migration patterns of the animal — details that improve scientists’ understanding of the species and help conservation efforts protect them and their environment.

“Enlisting citizens to participate in science has helped us uncover several mysteries of the whale shark. We are piecing together a puzzle of both the ecology of this endangered species and the areas that are most critical to them,” said Dr. Alistair Dove, Vice President of Research and Conservation at Georgia Aquarium, a co-author on the study.

The long-term observation project has provided enriched scientific knowledge of the species including:

Spot patterns in whale sharks are unique and long lasting, and provide a method of individual identification through photographs.
Some of the most populous hotspots of whale sharks include the Ningaloo Reef in Australia, the Atlantic coast of Mexico, Mozambique and the Philippines. Year-by-year observation of the population in these areas and lack of population in others suggests to researchers how illegal fishing and lack of conservation can impact aggregation.
There is a strong male bias at the majority of sites, showing an overall 66 percent male composition at those coastal places where the sharks are observable.
For the most part, whale sharks aggregate around the same hotspots from year to year.
Few individual whale sharks have been observed by the citizen scientists to move between countries. However, some do and can travel hundreds to thousands of miles, as revealed by satellite-linked tagging of the animals.

Engaging citizen scientists in photo-identification of whale sharks tells scientists more than the nature of the species. It also identifies an association between ecotourism activities and how they may affect the appearance and return rate of whale sharks. It can also identify how areas of high fidelity are addressing conservation techniques, showing how those techniques may be applied on a larger scale. Finally, a broader analysis of the environmental variables in the aggregation sites can inform the long-term impacts of climate change in the movement of the whale sharks.

ABOUT GEORGIA AQUARIUM
Georgia Aquarium is a leading 501(c) (3) non-profit organization located in Atlanta, Georgia, that is Humane Certified by American Humane and accredited by the Alliance of Marine Mammal Parks and Aquariums and the Association of Zoos and Aquariums. Georgia Aquarium is committed to working on behalf of all marine life through education, preservation, exceptional animal care, and research across the globe. Georgia Aquarium continues its mission each day to inspire, educate, and entertain its millions of guests about the aquatic biodiversity throughout the world through its hundreds of exhibits and tens of thousands of animals across its seven major galleries. For more information, visitgeorgiaaquarium.org.

ABOUT ECOCEAN
ECOCEAN is a not-for-profit research organization dedicated to conserving the world’s biggest fish, the whale shark. ECOCEAN scientists have been working on whale sharks at Ningaloo Reef since 1995 and have contributed to the global protection of whale sharks through reports to the IUCNRed List of Threatened Species and the United Nations Convention on International Trade in Endangered Species (CITES). ECOCEAN also promotes conservation of whale sharks and the marine environment by engaging members of the public in its ongoing “citizen science” projects. ECOCEAN was instrumental in setting up the world’s largest whale shark photo-identification library, the Wildbook for Whale Sharks, which encourages members of the public to get involved in whale shark research by submitting their photos. For more information, visit www.whaleshark.org.au.