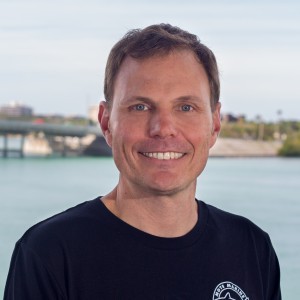 Brad has co- authored a Marine Science Laboratory Manual, published by McGraw Hill, as a clinical marine ecology education textbook. He has also created a Seashell Identification Guide for use by teachers.

His work has resulted in extensively traveling worldwide with Dr. Eugenie Clark (Mote's Founder) On two research excursions to Indonesia; he studied the habits and the habitat of a newly identified fish species. Brad s videotape of these Indonesian research excursions has become a popular presentation precursor. Brad has been a frequent presenter at many national and Florida conferences on effective marine education practices and the translation of scientific research data for school programs uses for greater student and adult learning enhancement.  In his civic and community involvement, he serves on the Executive Board for the Florida Association of Science Teachers (FAST) and is a Past-President of that group. For the past 4 years, he has been a member-volunteer on the Sarasota Bay Estuary Program Citizen Advisory Council, a group formed to provide environmental protection to the Sarasota Bay and its wildlife.