7/5 Turtle was found by a fisherman floating off City Island in Sarasota Bay on 4 July. Upon admission, the turtle exhibited neurologic symptoms and was suspected of having red tide toxicosis. Samples were taken to determine if red tide toxin is present in blood and urine of the turtle. Have started the turtle on SQ fluids while awaiting blood results. 7/12 The turtle almost died the second night before medication could take effect, but the next day began to respond. Turtle is now eating well and most of the neurologic symptoms have subsided. 7/16 Continuing to improve and is now gaining weight. 9/10 Turtle has had some liver problems, possibly related to the toxins, but these are improving now. Plan is to release the turtle within the next month. 10/10 Liver problems are finally resolving. Will recheck in 10 days and if blood values are normal, turtle will be released. 10/21 Liver problems are completely resolved and release has been scheduled for Oct. 27. 10/28 Grunt was released yesterday in north Sarasota Bay. Turtle swam away normally and everyone wished him well on his journey. 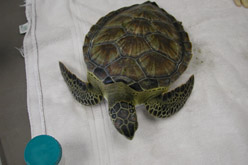 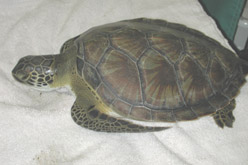