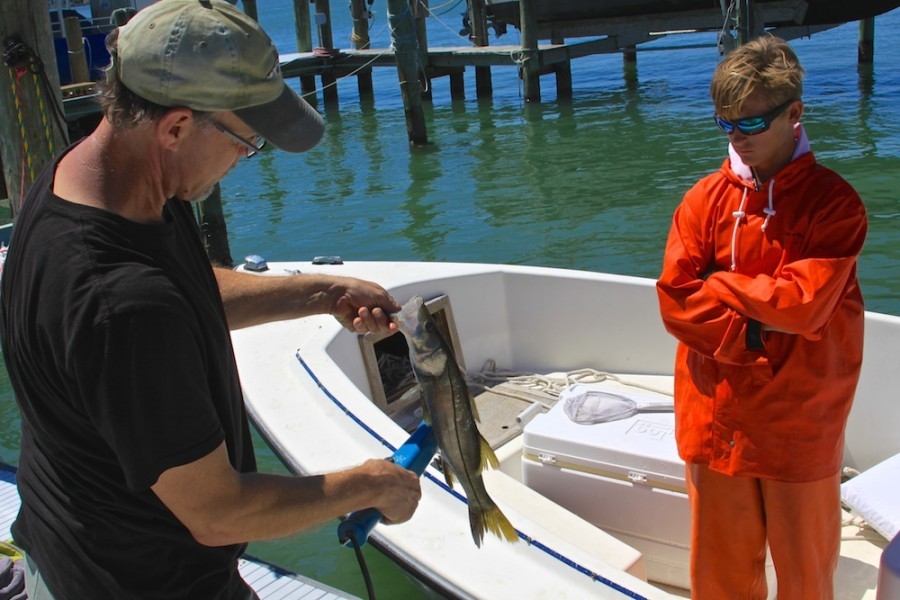 “The Snook Shindig is a research tournament, which is pretty unique,” said Dr. Kenneth Leber, Mote Senior Scientist. “It’s the only scientific tournament that involves citizen scientists with a focus on hatchery-reared and wild common snook.”

Snook are one of the most sought-after catches in Florida’s saltwater recreational fishing industry, which draws more than $7 billion to the economy annually. However, increased fishing pressure, habitat loss and natural challenges such as freezes and red tide have contributed to a decline in snook populations. Thus, for more than 25 years, Mote and Florida Fish and Wildlife Conservation Commission (FWC) scientists have partnered on research studies designed to evaluate if stocking hatchery-reared snook can be an effective fishery management tool for replenishing snook stocks.

Mote scientists first released hatchery-reared snook in 1997 and since then have released more than 56,000 fish in Sarasota-area waters.

The most recent snook release study – made possible thanks to a private donation to Mote and from funding provided by FWC – involved tagging about 400 juvenile common snook born and raised at Mote Aquaculture Park (MAP) with passive integrated transponder (PIT) tags and releasing the fish into the wild in 2015.

The PIT tags provide a reliable “barcode” for each individual fish to help scientists accurately track and recover data from the fish.

During the tournament, 155 snook were caught and one hatchery-reared snook was previously tagged and released by Mote in 2014.

“The goal of the Snook Shindig is to estimate the contribution of previously tagged and released snook to the Sarasota Bay snook fishery, and learn valuable information such as how different habitats affect snook growth, survival and migration patterns,” Leber said. “This can help Mote understand how stock enhancement could be used to help recover this population when snook suffer large mortalities during red tide and cold winters.”

“Tonight, we have the privilege of honoring Capt. Scotty Moore,” said Dr. Michael P. Crosby, President and CEO of Mote. “Captain Moore has been involved with Mote for many years and was Mr. Mote’s fishing captain. He is a committed conservationist and I could not imagine having a better champion to recognize this evening.”

During the awards dinner with more than 100 participants, Crosby recognized Moore and presented him with a framed and signed print by Steve Whitlock, a local artist, which included a special recognition statement on the frame.

"I feel overwhelmed with gratitude to be honored at this year's Snook Shindig,” said Moore. “The work that these scientists do is so important. They are the real stars and I'm happy to be a part of Mote's legacy."

Presenting sponsors, Carol and Barney Barnett, were also recognized and presented with a framed and signed print by Steve Whitlock, which included a special recognition statement on the frame.

The Barnetts have donated $3 million to help Mote implement its Fisheries Conservation & Enhancement Initiative to protect and restore fisheries in Sarasota Bay.

“I want to thank the Barnett’s for their passion and commitment to this cause and recognize their support,” Crosby said.

The Snook Shindig invited anglers to compete for the most fish caught and other categories, but more importantly anglers helped Mote scientists recover data from snook that were previously tagged and released into Sarasota Bay.

Anglers from all across the state and from as far away as Massachusetts fished along Sarasota Bay from Venice to Anna Maria Island from 7 p.m. Friday, April 8 through noon the next day. When a snook was caught, the fish was scanned with a wand and if it was a previously tagged snook, the wand recovered vital data that Mote researchers documented to identify individual hatchery-reared fish they previously tagged and released, recovering vital data that can be used to adjust release protocols.

“These guys fish right through the night and it’s always a pleasure to work elbow-to-elbow with our citizen-scientists. It’s part of what makes this program so great,” said snook researcher Dr. Nate Brennan, Mote Staff Scientist.

Past tournament results have revealed that changes in snook-release strategies, based on Mote pilot studies, have improved survival of stocked snook by as much as 200 percent.

“This year, we had such a great turnout this year and we hope anglers had fun and learned more about Mote’s fisheries research and conservation and how we have been studying a responsible approach to snook enhancement for decades, which strives to do no harm to wild fisheries and to understand how they are being effected both ecologically and economically,” said Carole Neidig, Mote Staff Scientist.