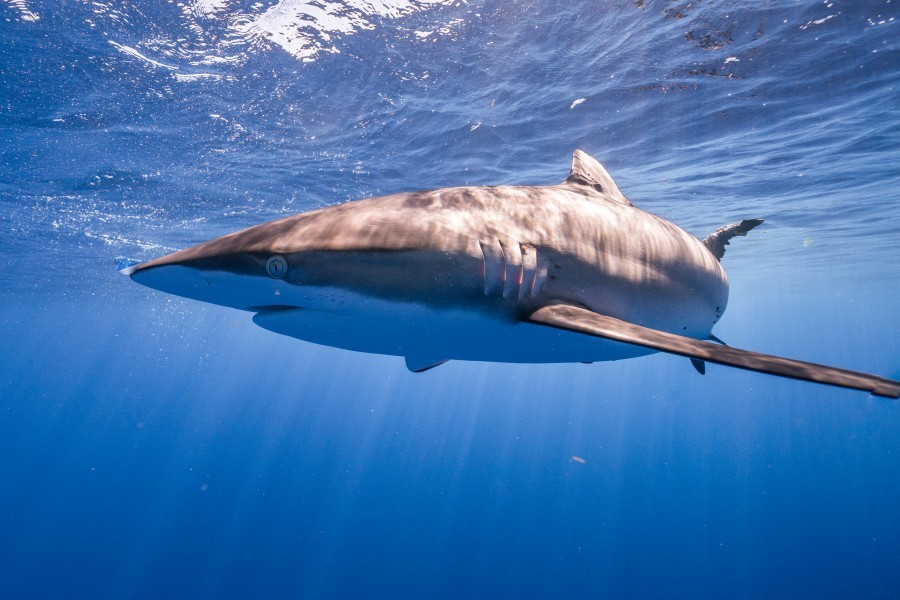 This story includes excerpts from a news release provided by Belize’s Fishery Department.

Sharks are gaining increased protection and scientific attention in Belize, thanks to a team effort including government fisheries managers, fisherfolk, and scientists from Mote Marine Laboratory.

Sharks are important predators in healthy marine ecosystems, but they’re in trouble in many parts of the world, including many Caribbean areas. To improve shark management in Belize, the Government of Belize recently announced new regulations prohibiting shark fishing within 2 nautical miles of Lighthouse Reef, Glover’s Reef and Turneffe atolls—a total area of about 1,500 square miles. These measures stem from recommendations of the National Shark Working Group composed of government, shark fisherfolk, non-government organizations and researchers.

“The group looked at the scientific data available and concluded that these regulations were a good investment to better protect some of Belize’s threatened shark species,” said Beverly Wade from Belize’s Ministry of Blue Economy. The new regulations are expected to be signed into law within the next month.

Dr. Demian Chapman, Director of Mote’s Center for Shark Research and member of the National Shark Working Group, has studied sharks and rays in Belize for more than 20 years, often teaming up with local partners. In his previous role at Florida International University (FIU), Chapman and partners conducted the world’s largest shark survey, Global FinPrint, and found that reef sharks were functionally extinct on many reefs in the 58 survey nations.

The project’s results, published in the peer-reviewed journal Nature, also provided hope. “Global FinPrint showed that reef sharks were doing well in places where people invested in management efforts that were culturally and socio-economically suited to the local community,” Chapman said. “This illustrates the importance of people power for shark conservation.”

Global FinPrint data helped to inform Belize’s new regulations and will continue to drive a new phase of science-based conservation efforts spearheaded by Mote—Expanding the Global FinPrint. To help shark populations rebound from global challenges such as unsustainable harvest and habitat loss, Mote is partnering with local grassroots organizations, governments and fisherfolk in countries where there is high conservation potential for reef sharks. Funding and scientific support are being directed to people in these locations so they can implement management approaches that are likely to work both for reef sharks and people.

Through Expanding the Global FinPrint, Mote and partners aim to achieve more successes like those already unfolding in Belize. There, a new initiative of the National Shark Working Group is combining fishers’ knowledge of how and where to catch sharks with Mote’s experience tracking sharks’ movement with electronic tags. Results will inform management decisions by Belize’s Fisheries Department. Support for this program comes from Greg Manocherian, Georgia Aquarium supplying tags, and from The Ellen Fund, Ellen DeGeneres’ conservation foundation as part of their new Endangered Campaign. Additional funding comes from the Mays Family Foundation, Earthwatch International and Betsy and Peter Snow.

“These sharks have already made some interesting movements that can inform management here in Belize,” said Chapman, who is also a Mote Senior Scientist and Manager of Mote’s Sharks & Rays Conservation Research Program. “One of the silky sharks, for example, crossed into Mexican waters after being tagged at Lighthouse Reef, which highlights how some sharks require cooperative management between Belize and other nations.”

This cooperative shark tagging program is a win for everybody because sharks are tagged instead of being landed, the fishers are hired for research, and the scientists and managers obtain useful information. “We really enjoy tagging sharks with Dr. Chapman and the science crew,” said Hector Martinez Jr., a shark fisher. “We all learn a lot from one another and have come to respect each other’s viewpoints on shark management in the country.” Martinez recently tagged a large tiger shark for the program that has spent most of its time in deep water between the main reef and Glover’s Reef atoll.

“I am really excited that we have been able to develop a working group where all sectors are pulling together to improve shark management in Belize,” Wade said.

In 2022, Mote and partners in Expanding the Global FinPrint will extend their shark and ray conservation model to other locations in the Indo-Pacific and Caribbean regions, where Global FinPrint collaborators are based.

Your donations to Mote for Expanding the Global FinPrint will help with hiring shark fisherfolk to tag sharks instead of landing them or help support alternative vocational training (school fees, course fees, SCUBA certification) so that they can reduce or eliminate their reliance on shark fishing. Make your donation today!