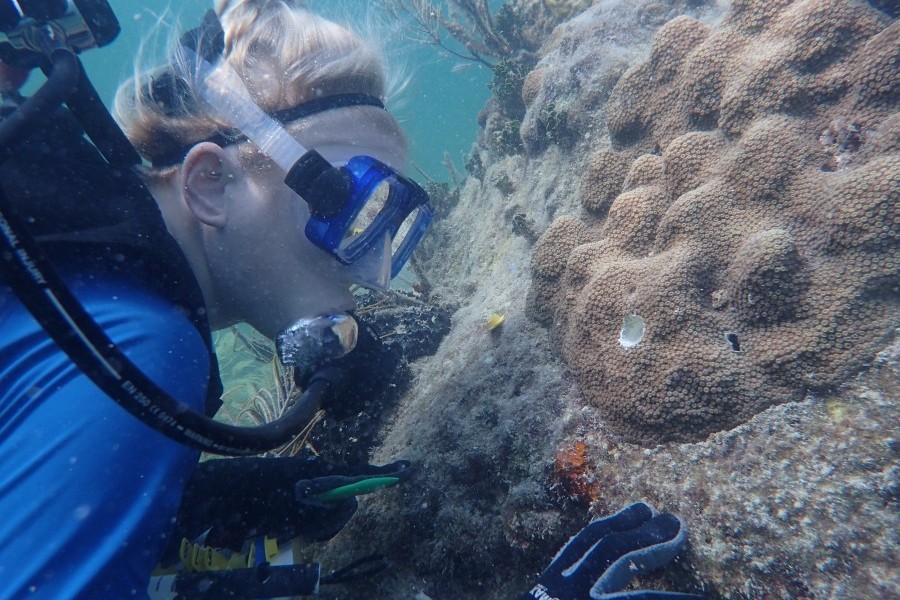 Index: News release | Video messages from Mote scientists | Messages from our partners | Support our coral research and restoration with a donation

This month, Mote’s coral reproduction scientist, Dr. Hanna Koch, identified gametes (eggs and sperm) inside colonies of two threatened, yet key, reef-building species that Mote restored to Florida Keys reefs in recent years: the massive or mounding species called mountainous star coral (Orbicella faveolata) and branching staghorn coral (Acropora cervicornis). Both species are listed as Threatened under the Endangered Species Act. The presence of gametes indicates that these corals are sexually mature, gravid (pregnant), and ready to produce the next generation of coral “babies” with fresh genetics to help revive declining coral populations.

These corals are achieving critical milestones for the entire field of coral reef restoration—showing the first signs that they are capable of producing new generations of corals on their own. These and other corals in Mote’s restored populations survived big challenges to reach this point, demonstrating resilience. Their success validates the significance and progress of Mote’s science-based, resilience-focused coral restoration.

Successful coral restoration is worth a happy dance!

If you agree, then please:

Support Mote's Coral Reef Research and Restoration with a donation!

Messages from our scientists

Dr. Erinn Muller, Science Director of Mote's Elizabeth Moore International Center for Coral Reef Research & Restoration, describes the methods used to enable this breakthrough: microfragmentation-fusion that allows Mote to speed the growth of slow-growing, massive corals, to help them become sexually mature and ready to become parents on the reef:

Messages from our partners

"This is one of the most significant coral restoration milestones we have achieved in Florida. Coral reef restoration has never been about restoring every single coral, but rather about restoring corals so reefs can recover naturally via reproduction. Up until now we didn't know however if using micro-fragmentation to get bigger corals faster would also result in getting reproductively mature corals faster as well.  It's a really big deal and having it happen at one of our Mission: Iconic Reef sites is even better."

“The ability to produce sexually mature colonies of the most important frame-building corals in the Florida Keys in such a short time frame is a major scientific breakthrough and a huge boost for our restoration efforts as these corals provide critical ecosystem services and ecological benefits for associated species on the restored reefs, while indirectly accelerating the recovery of Florida’s reef ecosystem through the production of offspring that can colonize surrounding reefs."

"This groundbreaking work by Mote scientists represents hope for the future of coral reefs. Decades of declines caused by numerous threats have left our reefs in a perilous position. Recovering these reefs will require innovation and dedication, and we are grateful to our partners at Mote for their tireless efforts to develop the techniques necessary to help restore Florida's reefs."

We are tremendously thankful that Mote Aquarium will be able to reopen to the public on Saturday, October 1, during normal operating hours (9:30 AM - 5:00 PM), following our closure for preparation and response to Hurricane Ian.  Unfortunately, our Sharktoberfest event, which was scheduled for October 1, will be postponed.  If you have purchased a ticket, please check your email for more information.  Our thoughts and best wishes are with our friends, family, partners and all of those who are continuing to manage recovery efforts.  Any additional updates about reopening will be provided via social media: @MoteMarineLab on Facebook, Instagram, Twitter.