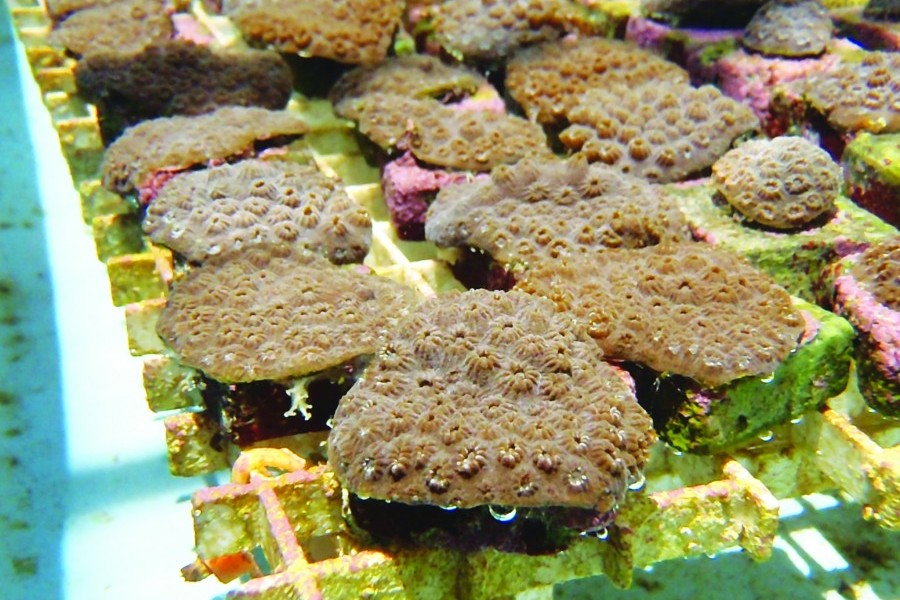 Corals being raised by Mote in the Florida Keys

June 8, 2020 – At a press conference earlier today in Islamorada, Mote Marine Laboratory & Aquarium announced plans for future development to further coral reef research and restoration in the Florida Keys and in Sarasota. This announcement, made on World Oceans Day, is in direct response to the urgent plight Florida’s Coral Reef is facing. Warming waters, more acidic conditions due to higher carbon emissions, a devasting coral disease and other stressors have left our once abundant, thriving reef near the brink of extinction.

Watch and read more below:

Mote, a global leader in marine research and conservation since its founding in 1955, has been actively paving the way in science-based restoration efforts in the Florida Keys for over 25 years. With a growing staff of highly revered and heavily published PhDs and expert practioners, Mote is the only organization completing the entire restoration loop under one entity: from assisting sexual-reproduction cycles, to rearing the next generation of coral, to resilience testing, asexual fragmentation with scaled up outplanting and extensive monitoring. To date, Mote has outplanted over 78,000 coral fragments on Florida’s Coral Reef, with a survival rate of over 90% in most cases. Additionally, thousands of corals are growing in Mote’s land-based nursery on Summerland Key and Mote’s two underwater nurseries in the Lower Keys.

This morning, Dr. Michael P. Crosby, Mote President & CEO, shared Mote’s plans to build an additional land-based coral nursery on the property of famed Bud n’ Mary’s Marina in Islamorada in the Upper Keys—the first of its kind in Islamorada. “We’ve been incredibly successful with our efforts in the Lower Keys, but to meet the urgent demand of restoring our rapidly declining reef, we must double our operations and capacity to serve additional parts of the reef tract.”

Late last year, National Oceanic and Atmospheric Administration (NOAA) announced its initiative Mission: Iconic Reefs, which identified seven “iconic reefs” in the Florida Keys that will receive a concentrated, collective effort of restoration support in the coming decades. Cheeca Rocks, a prominent reef near Islamorada, is one of the identified Iconic Reefs and the focus of Mote’s targeted response with the new coral nursery. Crosby adds, “the Islamorada community has a rich history of world-class fishing, diving and ocean recreation, and in many ways is the heartland of the Florida Keys. Mote is honored to establish Islamorada’s first science-based coral nursery as part of our broader strategic reef restoration and science education mission.”

The new nursery was not the only partnership unveiled during the press conference.  Islamorada Conservation and Restoration Education, I.Care, is Islamorada’s newest environmental awareness organization, focusing on a community-based approach to coral restoration.  They will work with citizen-divers to help outplant and monitor Mote-supplied coral fragments onto Islamorada’s reefs. Dr. Kylie Smith, co-founder of I.Care explains, “true advocacy, conservation and education comes from hands-on experiences with citizen scientists. Giving the citizens and visitors of Islamorada the tools and ability to save our reefs may be the difference we need to ensure our reef can survive now and for future generations.”

In addition to the new partnerships in the Florida Keys, Mote recently announced that it is moving forward on building a new coral gene bank within the 200-acre Mote Aquaculture Research Park in east Sarasota County. Crosby explained, “this gene bank is an eco-vault like no other, a modern-day Noah’s Ark, that will ensure we will never lose the diversity of coral that makes our reef so special.” This gene bank, purposefully chosen to be built at an inland location, will be housed in a Category-5 hurricane resistant building, with state-of-the-art environmental systems and controls. Mote already has over 1,600 individual genotypes of corals from 17 different species of Florida coral in their care. Crosby added that “Mote now has one of the largest single collections of living coral genetic diversity in existence, and our long-term strategy is to extend our coral gene bank’s capacity to hold species and genotypes from reefs around the world.”

Celebrating Mote’s Past & Present in the Keys

In 1993, Mote expanded to the Florida Keys, with its first Keys laboratory located on Pigeon Key, located in the middle of the 7-mile bridge. By 2000, Mote had moved operations into a recently vacated commercial lab building on Summerland Key. As operations and staff continued to grow, Mote realized a greater need for a facility to support its vast research and restoration goals in the Florida Keys. Indeed, in 2017, that dream became reality with the opening of the Elizabeth Moore International Center for Coral Reef Research & Restoration; a 19,000 square-foot, Category 5 hurricane-resistant building with five laboratories, a land-based nursery, a Climate and Acification Ocean Simulator (CAOS), the Alfred Goldstein Institute for Climate Change Studies, classrooms, and temporary dorm-style housing for visiting researchers from universities and organizations from around the world.

Mote’s first underwater nursery, located near Looe Key, recently turned 10 years old. That nursery has grown coral fragments, that if extended from tip to tip, would stretch to over 6 miles of coral. Mote staff and other nursery residents (most with fins), are celebrating 10 years with an underwater birthday party, today on World Oceans Day.

Success rarely happens alone, and Mote credits its success to strong partnerships within the communities we serve. Today, on World Oceans Day, we celebrate with non-profit organizations, for profit businesses, local artists and breweries, dive shops and volunteer citizen scientists’ groups, the Mote family of supporters and members, and the entire community of the Florida Keys with one goal in mind: saving our coral reef. A few examples of our partnerships:

This Upper Keys first microbrewery created a special brew, The Resistant Strain, to support Mote’s quest to identify, propagate, and plant coral with resilient qualities that will ensure that it survives now and in the future. This double hibiscus Kolsch is available on tap at their quaint and fun location in Islamorada, as well as in 4-pack cans.

Located in the Lower Keys, Captain Hooks has teamed with Mote to provide an exclusive coral restoration experience. Divers will get a behind-the-scenes tour at Mote’s Summerland Key lab and land-based nursery, a briefing and educational presentation about science-based coral restoration, and hand-on training session before heading out to Mote’s underwater nursery to conduct coral restoration activities.

Mote forged a collaboration with the Boys Scouts of America, Florida National High Adventure Sea Base to bring coral reef restoration to BSA’s Marine STEM Adventure program. Now, at their Brinton Environmental Center in Summerland Key, BSA has a land-based coral nursery, currently growing coral provided by Mote, with the intention to outplant that coral to the reef in the near future.

Recognizing the critical need for healthy oceans, Enzymedica is devoting a portion of the sales of its new Aqua Biome fish oil supplements to Mote’s coral restoration program.

With a mission to protect and restore coral reefs, Legend Bracelet created a special Coral Reef Bracelet with one capsule of sand from the Florida Keys and an empty capsule to be filled by something meaningful to the wearer.

World Oceans Day is a global movement to celebrate and honor the oceans, and the critical role the oceans play in our everyday lives. Mote will celebrate throughout the day virtually on our social media channels. Follow us and join in:

Mote Marine Laboratory & Aquarium is an independent, nonprofit, 501(c)3 research institution founded in 1955. Mote began and flourished through the passion of a single researcher, Dr. Eugenie Clark, her partnership with the community and philanthropic support, first of the Vanderbilt family and later of the William R. Mote family. Today, Mote is based in Sarasota, Florida, with six campuses stretching from Sarasota to the Florida Keys. Mote has more than 200 staff, including 36 Ph.D.-level scientists focused on over 20 world-class research programs studying oceans locally to internationally, with an emphasis on conservation and sustainable use of marine resources. Mote’s vision includes positively impacting public policy through science-based outreach and education. Showcasing the Lab's research is Mote Aquarium, open from 10 a.m. to 5 p.m. 365 days a year. mote.org