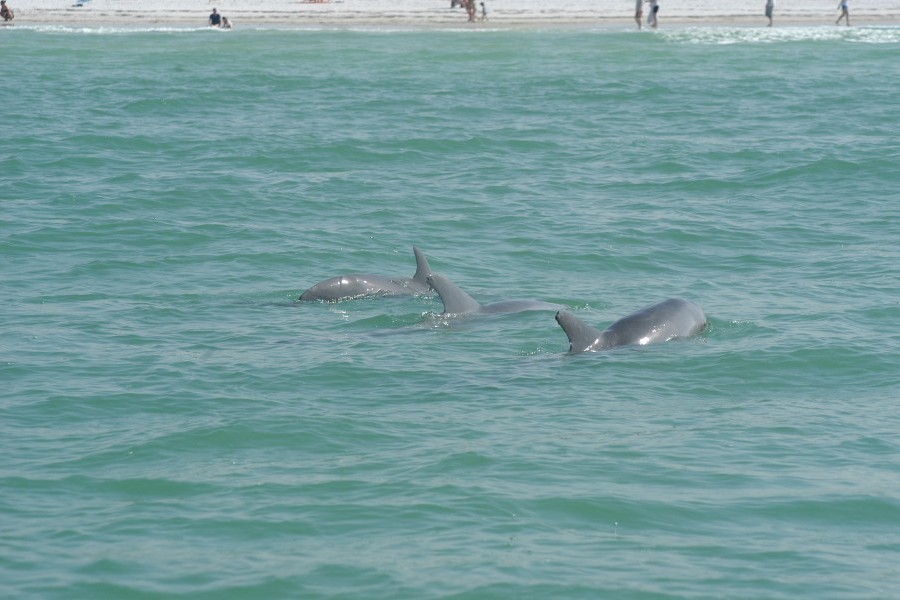 One of the oldest dolphins in Sarasota Bay died on June 7 after ingesting fishing gear. This loss serves as a reminder to protect marine life while enjoying our coastal waters and beaches on July 4 and year 'round. (Tips below)

The 58-year-old female dolphin Squiggy was recovered dead and examined by staff from the Florida Fish and Wildlife Conservation Commission. Squiggy was emaciated and she had three large fishing hooks in her stomach and one in her mouth that was attached to 11 feet of heavy monofilament line, along with healed scars from previous entanglements. She was known to spend time near Venice, including areas with frequent boat traffic.

Squiggy was first identified in September 1980 and was documented 267 times since then by the Sarasota Dolphin Research Program (SDRP) – a collaboration between Mote Marine Lab and Chicago Zoological Society. SDRP staff have continued monitoring Squiggy’s descendants, who have also suffered human interactions. Squiggy’s daughter died in 2012 from ingesting recreational fishing gear, and the daughter’s six-month-old calf died several weeks later from losing her mom. Squiggy’s first grand-calf died from entanglement in a crab trap’s float line.

Currently, the dolphins of Sarasota Bay are at the height of calving season. Five babies have been born this year and one was lost for unknown reasons. During this time of year, it’s more important than ever to be vigilant for dolphins.

Manatees are also on the move for reproduction and foraging, and sea turtles are swimming just offshore to mate and coming ashore to nest.

All marine mammals and sea turtles are protected by federal law, and all the species living along southwest Florida face significant risks from human interactions.

According to Mote’s Stranding Investigations Program — a 24-hour response service for marine mammal and sea turtles in Sarasota and Manatee counties — about 25-30 percent of all animals rescued or recovered by Program staff were affected by human interactions such as boat strikes and fishing gear. Typically, dolphins are more likely to be harmed by fishing gear and sea turtles are more likely to be struck by boats.

Here are some “do and don’t” tips to keep our beaches turtle-friendly:

How to Report Marine Life in Distress

Mote’s Stranding Investigations Program responds 24 hours a day, seven days a week to reports of sick, injured and dead marine mammals and sea turtles for animals in Sarasota and Manatee county waters. Live animals are brought to Mote’s Dolphin and Whale Hospital or Sea Turtle Rehabilitation Hospital and deceased animals undergo a detailed post-mortem examination to help reveal the natural history of these animals and evaluate long-term trends in mortality.

Within Sarasota or Manatee county waters, if you see a stranded or dead dolphin, whale or sea turtle, please call Mote's Stranding Investigations Program at 888-345-2335.

If you see a stranded or dead manatee anywhere in state waters or a stranded or dead dolphin, whale or sea turtle outside of Sarasota or Manatee counties, please call the Florida Fish and Wildlife Conservation Commission’s Wildlife Alert hotline at 1 (888) 404-FWCC (3922).