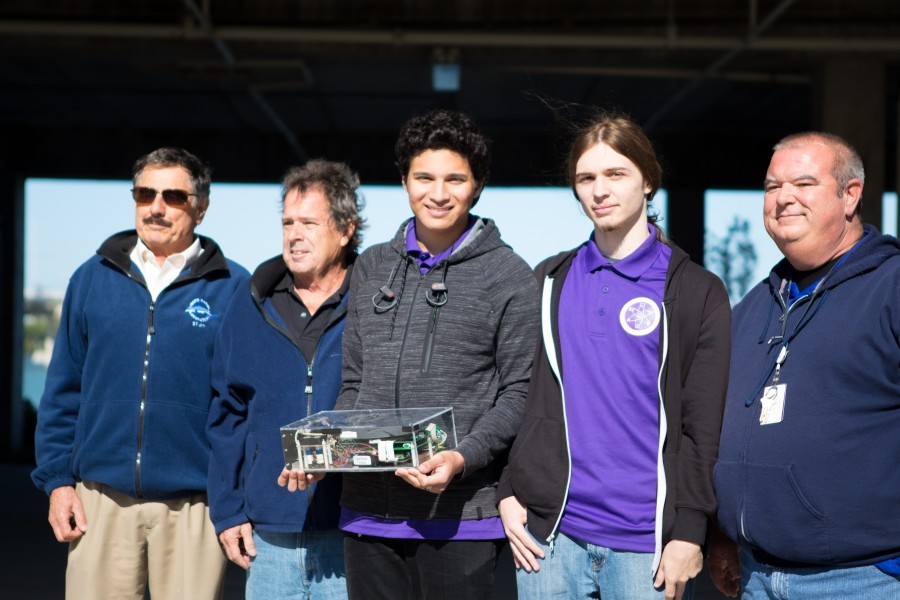 In addition to the PHYSS unit that the Booker Engineering students encased for use in the lab, Mote has also converted two PHYSS units into submersibles and deployed them in the field this year to monitor for Florida red tide  —  one southeast of Sanibel lighthouse and another at Mote’s New Pass dock in Sarasota.

Mote’s Ocean Technology staff is currently designing an upgraded version of the submersible PHYSS with supporting hardware and software for more effective use of these new instruments.

“The Booker Engineering students were doing work that we desperately needed — we had the electronics handled for this instrument, and they knew how to make the packaging,” said Mote Instrumentation Specialist Jim Hillier. “I could tell right away these kids knew their stuff, and they proved it. The case they made for the PHySS is our trophy; they did a good job making everything fit together, and it looks good too. It will be used to house the PHySS in our lab.”

“It’s good to help out the community, and Mote needed the use of our workshop and expertise, and we were happy to help and get a project underway for them,” LeFils said.

Mote’s PHySS is a new instrument for detecting harmful blooms of Karenia brevis, known as Florida red tides — which have a significant impact on the Gulf of Mexico’s wildlife and coastal communities. The PHySS was designed and built at Mote, and it represents the next step forward beyond Mote’s original red tide detector, an innovative device nicknamed the BreveBuster and designed by Dr. Gary Kirkpatrick.

The first BreveBuster was deployed more than a decade ago. Now, with better available tools and components, the new PHySS will detect red tide in much higher resolution than ever before. Both instruments shine specific kinds of light through samples of algae and use a spectrophotometer to detect which wavelengths of light are absorbed or reflected — a result used to identify the algae. The PHySS can make these measurements with 16 times greater resolution, for better detection of red tide algae. Mote scientists hope to modify the PHySS to detect additional types of marine algae, and potentially even non-living substances in the environment that can influence algae blooms.

Mote’s PHySS instruments need specially designed cases to protect them in the lab and in the marine environment, and Booker High School Engineering students are up to the task! Students Arismendi and Lefils were given basic plans for the enclosure and mounts for the lab-based PHySS. They created these items successfully using computer-aided design, and they fully constructed the components in the Booker Engineering lab using their laser engraver and 3D printer, meeting the constraints set forth by Mote.

“Mote gave us blueprints of the housing they needed, some of the parts were designed by us, by Evan, and the rest we designed on AI and engraved by laser engraver,” Arismendi said. “I saw this as a great opportunity to meet engineers and see what they do in the field, and to get some of that kind of experience as well as help out the community. It’s great being able to have something we created go out into the real world. “

This is the students’ first project with Mote, and more are anticipated. Currently, Mote scientists have the lab-ready PHySS in the Booker-designed case, along with a dockside PHySS in a simple case made at Mote. Next, Mote scientists will invite Booker students to work on a submersible housing for deploying a PHySS underwater – a challenging and exciting task!

“Our students are developing their skills in engineering, digital design and manufacturing,” said Booker Engineering Liaison Tony McCrea. “In our program and in this partnership with Mote, these students are creating a concept and bringing it all the way to a finish product. It’s really groundbreaking stuff.”