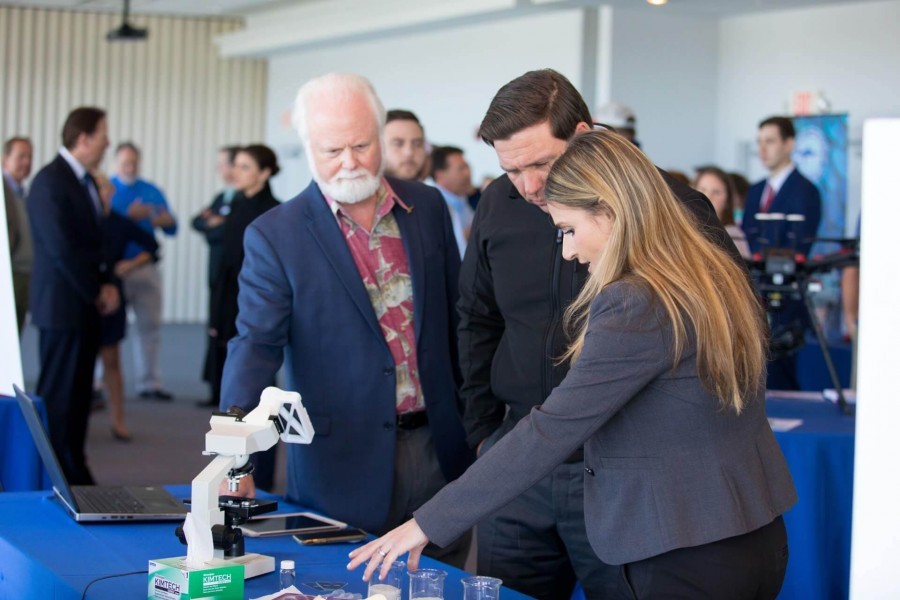 Mote’s diverse team of Ph.D., harmful algal bloom scientists was pleased to host Governor DeSantis and leaders of the Florida Fish and Wildlife Conservation Commission (FWC), Florida Department of Environmental Protection (DEP) and a diverse group of environmental nonprofit, government and marine industry representatives to discuss the governor’s priorities for Florida’s water quality and share updates on Mote’s own technology and discoveries to-date.

With more than four decades of red tide research in its 64-year history, Mote has produced critical monitoring tools such as the Beach Conditions Reporting System that serves millions of people, developed and patented innovative technologies such as its ozone system that is being field-tested for red tide mitigation in high-impact areas, and yielded essential insights into the biology and ecology, nutrient sources, ecotoxicology, and human and wildlife impacts of Florida red tide algae (Karenia brevis). In late 2018 Mote announced its new Red Tide Institute dedicated to translating red tide research into practical mitigation tools to improve coastal communities’ quality of life. The Institute began thanks to its Founding Donor, the Andrew and Judith Economos Charitable Foundation. 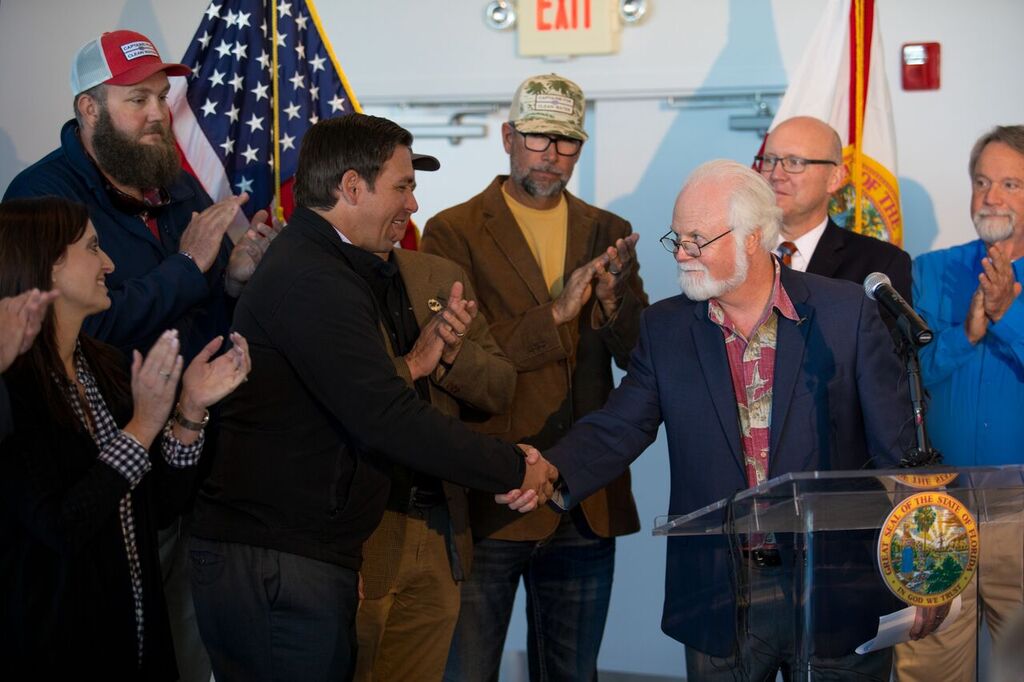 Mote President & CEO Dr. Michael P. Crosby thanked Governor DeSantis for his immediate and constructive attention to harmful algal blooms, from the freshwater blue-green algae in Florida’s lakes and rivers to the most serious and pressing challenge for our Gulf Coast — Florida red tide blooms in the ocean. The Florida red tide bloom that began in October 2017 proved devastating for Florida fisheries, killed hundreds of large marine animals in 2018, and contributed to a federally designated Unusual Mortality Event for bottlenose dolphins. Bloom concentrations of K. brevis algae persist in some areas even now.

“The fact that Southwest Florida is currently experiencing devastating impacts from harmful algal blooms is well understood by all of us who call this region home,” Crosby said. “Mote Marine Laboratory has been serving as a leader on the front lines of responding with science, technology, passion and partnerships. As the Governor has made clear, together we are going to fight red tide and other harmful algal blooms.”

Crosby shared Mote’s bold vision for effectively addressing Florida red tide. “Continued funding for the ongoing and highly productive cooperative red tide program between Mote and FWC is essential. However, an additional and much more applied science initiative is needed to address the urgency for decreasing impacts of red tide to Florida’s environment, economy and quality of life. Therefore, Mote is working in partnership with FWC and DEP to establish a new Florida Red Tide Mitigation and Technology Development Initiative. Mote is asking the Florida Legislature to establish this five-year Initiative as an independent and coordinated effort among private and public research entities to develop prevention, control, and mitigation techniques of red tide impacts on the coastal environments and communities in this state.”

Governor DeSantis stepped to the mic and presented his new executive order:

“We will be seeking 2.5 billion dollars over the next four years for water-resources and Everglades-related projects, a billion dollars more than the previous four years,” DeSantis said. “But funding alone will not protect our environment. That is why the executive order I signed directs DEP to take decisive actions to do more now for our environment, including to appoint a Chief Science Officer. We also want them to be talking with people like this,” he said, referring to the Mote scientists and their partners in the room, “so that when we make policy it will be effective policy.”

“Florida is fortunate to have some of the best academic and scientific institutions — like Mote — who work tirelessly to address some of Florida’s most pressing environmental issues, including red tide,” DeSantis said.

The new executive order directs DEP and the South Florida Water Management District to immediately move forward with the Everglades Agricultural Area Storage Reservoir and expedite projects to improve management of Lake Okeechobee. It includes creation of a Blue-Green Algae Task Force in addition to the red tide task force that FWC will re-establish to expedite progress over the next five years to improve water quality in areas facing recurring algal blooms. The governor also directed DEP to restructure to advance goals including improved water quality, protection of coastal ecosystems, and resilience of coastal communities in the face of challenges including sea level rise and climate change.

“It’s wonderful to have our new governor, the leadership of our state, in Sarasota County to fight the biggest issue challenging us today,” said Republican State Sen. Joe Gruters, of Sarasota and Charlotte counties. “This is doing what’s right — protecting our natural resources and waterways, the jewels of Florida. Mote Marine Lab, the vision you’ve come up with and work you have done for this community and entire state, you don’t get nearly enough credit. During this red tide, you have been out in front, nonstop. From the state standpoint, thank you for being a leader here in Florida.”

Lieutenant governor Jeanette Nuñez stated: “I want to thank Mote for allowing us to come here and discuss the important steps the governor is taking. For far too long we’ve seen the challenges that have affected this coast and our other coast. Floridians deserve to see this get the attention it deserves.”

“I am very grateful that during his first week in office, Governor DeSantis chose to visit Mote Marine Laboratory to learn about the research our talented Mote scientists are conducting to combat harmful algal blooms," said Republican Senate President Bill Galvano, who represents Manatee and portions of Hillsborough counties. "However, this is not just a visit; it is a chance for further understanding of the incredible and important work done here. Much of the research funding the Legislature has appropriated for red tide over the last several years is utilized locally through a partnership with Mote. As an honorary trustee of Mote, I have been very engaged in monitoring the progress of their research. I am grateful for the Governor’s commitment to ensuring we continue to support this critical work.”