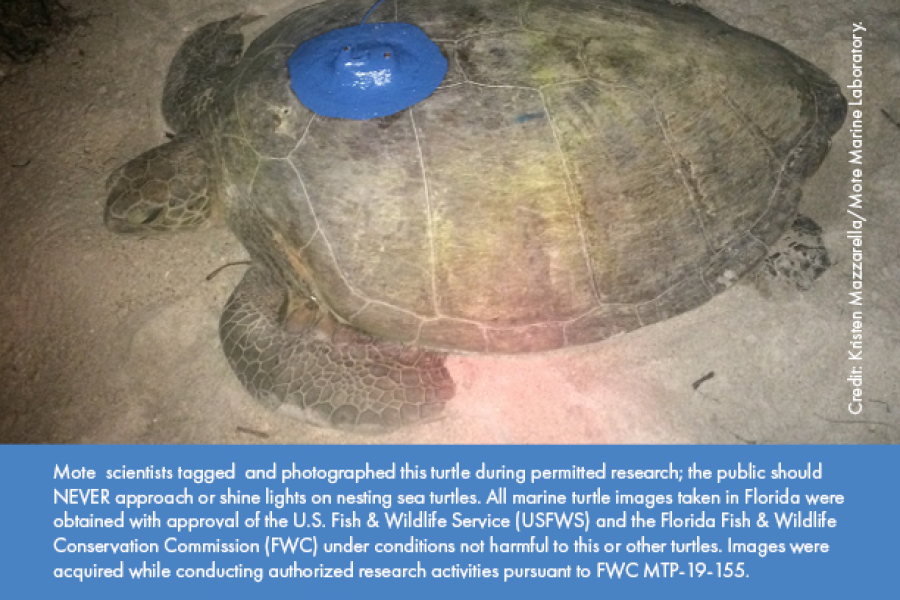 Four nesting female green sea turtles were tagged with satellite transmitters by Mote Marine Laboratory scientists in the past few weeks on Casey Key, with the goal of tracking this threatened species whose nests counts are increasing on southwest Florida beaches.

Mote’s Sea Turtle Conservation & Research Program monitors sea turtle nesting on 35 miles of Sarasota County beaches — Longboat Key through Venice — during each day of nesting season, May 1-Oct. 31. From the end of May through July 31, Mote scientists conduct nighttime patrols to encounter, tag and learn about nesting turtles on an individual level. Most local nests are laid by loggerhead sea turtles (Caretta caretta), but nest counts from green sea turtles (Chelonia mydas) have increased notably since Mote detected the first local green nest in its 37-year monitoring history, in 1994. Green nests are historically more common along southeast Florida, and their counts increased slowly in southwest Florida for a time but truly ramped up within the past decade. In 2017, Mote counted a record 79 green nests locally, and the Florida Fish and Wildlife Conservation Commission reported a statewide record count.

“In recent years the numbers of green nests have increased exponentially,” said Mote Senior Biologist Kristen Mazzarella. “For our 99% loggerhead nesting beach, having so many green nests is very exciting.”

The more scientists can understand the greens’ nesting progress and overall behavior, the better resource managers will be able to safeguard and sustain their populations. “I'm using satellite tags to get a better understanding of where they nest, how many times they nest in a season, where they go in between nests, their migratory routes and their foraging grounds — where they go after nesting season ends,” Mazzarella said. “With this information, we can learn more about threats to green turtles in the ocean and get a better idea of how many green turtles are nesting on our beaches, by determining how many nests each one lays and how wide an area they spread them over.”

Previously tagged greens from Mote beaches have migrated to feed in the Florida Keys and Mexico’s Yucatan Peninsula. So far, Mote has primarily tracked loggerheads, and the effort to study nesting greens is relatively nascent. “Since greens are herbivores and loggerheads are omnivores, we expect to find very different foraging grounds which we can identify for protection.”

Tagged green turtle Freda was named after Freda Perrotta, one of the founders of Longboat Key Turtle Watch (LBKTW), which partners with Mote’s Sea Turtle Conservation & Research Program to monitor nesting on the northern end of Longboat Key under Mote’s state permit. Perrotta, age 93, has been the backbone of LBKTW over 25 years of service, including patrolling beaches, educating the public and caring for rescued turtle hatchlings until they could be released, and more. Green turtle Freda was originally encountered in 2015 on Manasota Key. LBKTW donated toward the purchase of a satellite tag in December 2018.

Green turtle June was named after June McIntosh, a volunteer for Mote's Sea Turtle Patrol on Casey Key who passed away last fall and had requested that donations be sent to Mote’s tagging program in lieu of gifts. The turtle was named to honor McIntosh’s bright, happy spirit; her dedication and enthusiasm for Sea Turtle Patrol brought joy other volunteers and the public. June the turtle was encountered for the first time in 2019 on Casey Key, on the day when Mote staff attached her satellite tag.

Thalia was named for a Greek muse who is described as joyous and flourishing — Mote scientists hope this turtle flourishes and lays many nests. Her name also evokes Thalassia, the scientific name for the turtle grass, a seagrass eaten by green turtles. She was first observed in 2015 on Manasota Key.

Each turtle was tagged after she finished nesting — digging a chamber in the sand, depositing a clutch of eggs the size of ping-pong balls, and burying the nest. As each turtle crawled back toward the ocean, Mote scientists held her in a corral temporarily and attached the tag with a special adhesive. Each tag has a potential battery life of two-and-a-half years, though sometimes tracking is cut short if the sea turtle breaks the tag or if biofouling organisms grow over its sensor. If a tag can no longer transmit, it might still collect data that can be retrieved by encountering the turtle again and removing the tag.

Mazzarella and colleagues hope to tag at least two more nesting greens this season. Mote, a nonprofit, relies upon donor support for these and other conservation-focused research efforts.

Due to a temporary technical issue, Mote Marine Laboratory & Aquarium is unable to process online ticket sales, online membership renewals or online donations at this time. Aquarium tickets can be purchased on site with a credit or debit card (no cash) by visiting our admissions windows (visitor information at mote.org/reopening). For membership needs, call 941-388-4441, ext. 373, and for donations please call 941-388-4441, ext. 309.