Mote’s Sea Turtle Conservation & Research Program has tagged sea turtles with satellite transmitters since 2005 to track their behavior and migrations.

Want to name and track your own turtle?

Mote's Sea Turtle Conservation and Research Program is actively seeking supporters to help fund this tagging work. For a $5,000 donation, you too can sponsor a turtle that you can name and track! Consider giving this as a gift for a loved one. Other options to contribute to this work are also available. Please call Mote's Development Office at 941-388-4441, ext. 309, to learn more.

Thank you for your support!

ALL MARINE TURTLE IMAGES TAKEN IN FLORIDA WERE OBTAINED WITH THE APPROVAL OF THE U.S. FISH & WILDLIFE SERVICE (USFWS) AND THE FLORIDA FISH & WILDLIFE CONSERVATION COMMISSION (FWC) UNDER CONDITIONS NOT HARMFUL TO THIS OR OTHER TURTLES. IMAGES WERE ACQUIRED WHILE CONDUCTING AUTHORIZED RESEARCH ACTIVITIES PURSUANT TO FWC MTP-155. 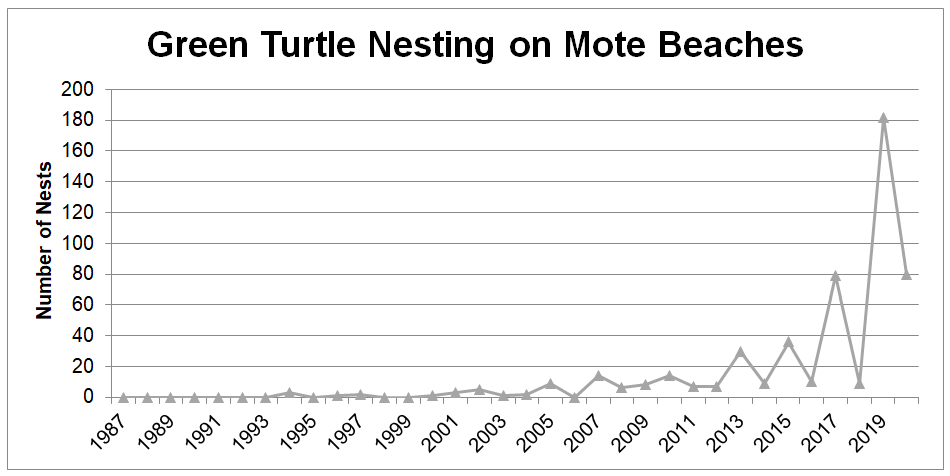 Green sea turtles have been nesting (laying their eggs) along southwest Florida beaches in increasing numbers in recent years. This pattern presents an opportunity to tag nesting females with satellite transmitters to better understand the lives of green sea turtles in the Gulf of Mexico. By satellite tagging them, Mote scientists are learning more about where and how often they nest, where they travel to forage (feed) after nesting season ends, and what routes they use to get there.

Green turtles tend to nest in a “saw-toothed” pattern (see graph on the right), with many nests laid one year and few nests laid the following year. Learning more about which individuals comprise these different nesting years may help us understand why they display this pattern.

Turtles that are currently transmitting can be found below. (Previously tracked green sea turtles are here.) 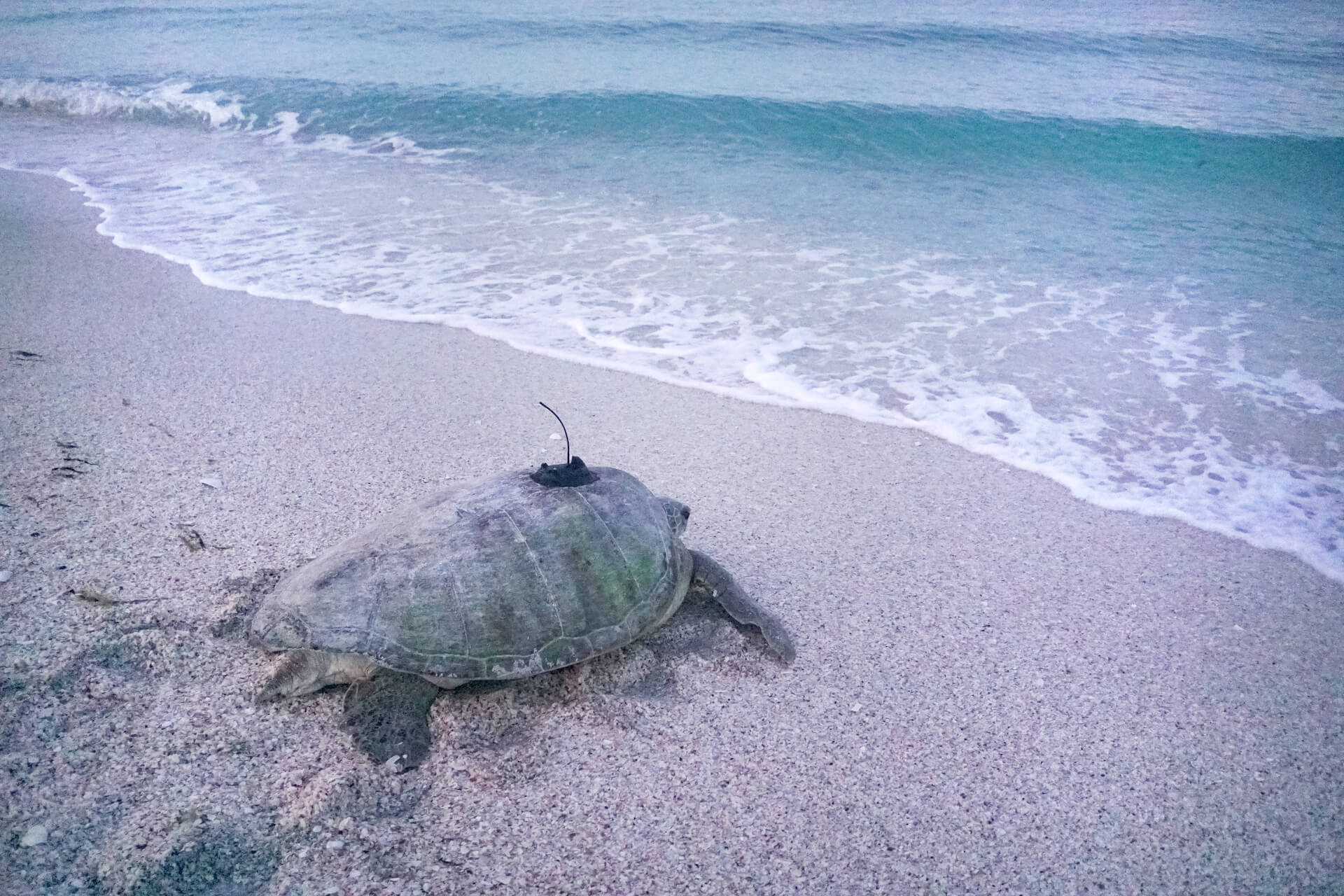 Amelia is an adult female green sea turtle who was observed nesting and received a satellite tag on Casey Key in the early morning hours of June 21, 2019. This was the first time Amelia has been observed nesting, and she received flipper tags and a microchip so that scientists can identify her after her satellite tag come off. Amelia was tracked to her foraging grounds in the Marquesas Keys, Florida, where she likely rubbed off her tag. We spotted Amelia nesting again on Casey Key on June 8, 2022 and attached another satellite tag to her. She is being tracked again thanks to divers that recovered one of our satellite tags and returned it to us (it is being reused) and thanks to a generous donation from Cathy Paris. Amelia was named after pilot Amelia Earhart, in honor of Mote Sea Turtle Patrol volunteer Will Collins, a former pilot. Will and his wife, Sally, were longtime friends, volunteers (1985-2006), and supporters of Mote’s Sea Turtle Conservation & Research Program. Their kindness and generosity will be forever remembered and appreciated, whether they were waving as Sea Turtle Patrol passed by their home or providing a nighttime shelter to Mote’s tagging team in stormy weather.

ALL MARINE TURTLE IMAGES TAKEN IN FLORIDA WERE OBTAINED WITH THE APPROVAL OF THE U.S. FISH & WILDLIFE SERVICE (USFWS) AND THE FLORIDA FISH & WILDLIFE CONSERVATION COMMISSION (FWC) UNDER CONDITIONS NOT HARMFUL TO THIS OR OTHER TURTLES. IMAGES WERE ACQUIRED WHILE CONDUCTING AUTHORIZED RESEARCH ACTIVITIES PURSUANT TO FWC MTP-155.

Sweet Pea was the first green turtle satellite tagged by Mote back in 2007 when she was first observed nesting on Casey Key. She was tracked to her foraging grounds in the Marquesas Keys after which her tag stopped transmitting. She has been observed nesting on Casey Key and Manasota Key for the past 15 years (identified by her flipper tags and a microchip). On June 9, 2022 we spotted Sweet Pea starting her sixth nesting season and placed another satellite tag on her to track her movements during and after the nesting season. We are curious whether Sweet Pea will return to forage in the Marquesas Keys and looking forward to finding out what she can tell us about nesting green turtles in the Gulf of Mexico.

After they leave the beach as hatchlings, male sea turtles spend their entire lives at sea—unlike females that return to shore to nest. Therefore, males are a more elusive group to study. When adult males are injured or sick and receive hospital care, scientists can use the opportunity to learn more about them by satellite tagging the turtles before releasing them back into the marine environment. Satellite tags can help reveal the post-release behavior of rehabilitated turtles as well as the movements, habitat, home range and migratory pathways of adult male loggerheads in the Gulf of Mexico. (Previously tracked male loggerheads are here.) 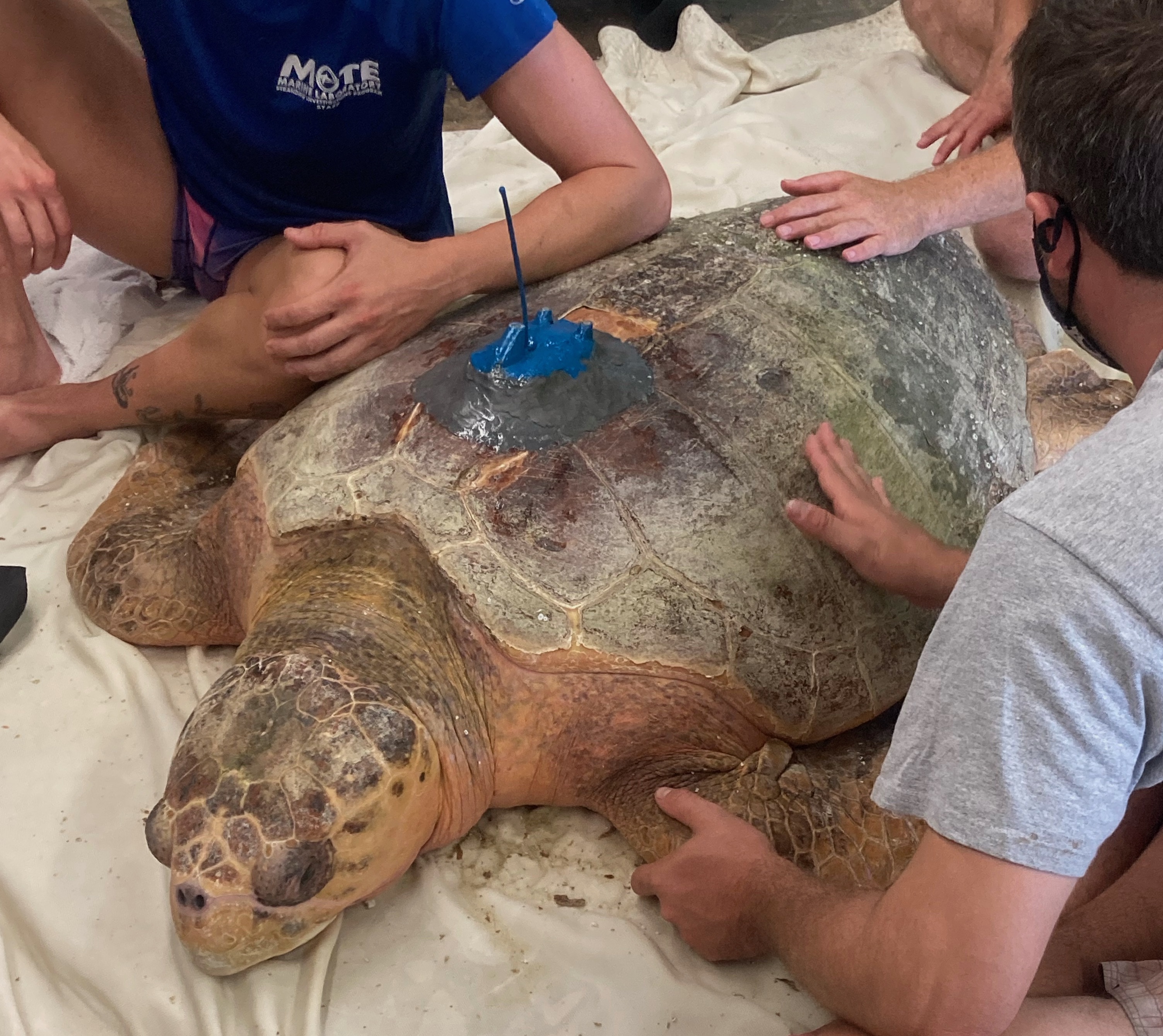 Bobby is an adult male loggerhead who was found struggling in the surf in Manatee Public Beach in Manatee County, Florida on July 31, 2021 with suspected brevetoxicosis and rescued by Mote's Stranding Investigations Program. Bobby's name was inspired by the bobbing movement he was making at the surface. After 45 days of rehabilitation at Mote's Sea Turtle Rehabilitation Hospital, he was released with a satellite tag on September 15, 2021 from Ft Myers, Florida. Bobby is being tracked thanks to a donation from Ocean & Company. 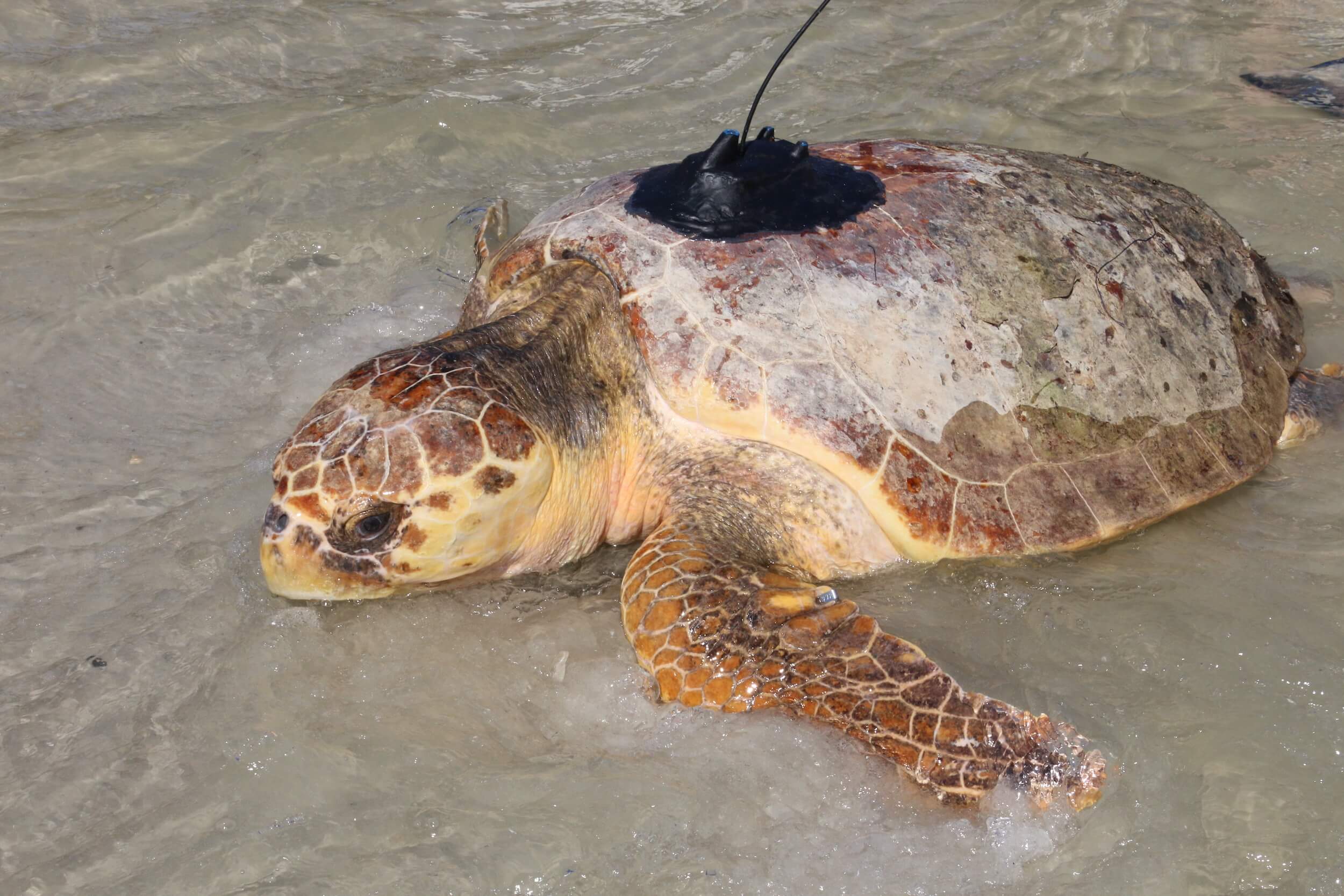 LEO was rescued by the combined efforts of Gulf World Marine Institute (GWMI), Panama City Beach Turtle Watch and the Bay County Sheriff’s Office on Oct. 23, 2021, near the shore of Beach Access 24 in Panama City Beach, Florida, where he was found floating and lethargic. The more than 200-pound male loggerhead sea turtle was brought to GWMI for rehabilitation. After 87 days of treatment, he was medically cleared by GWMI veterinary staff and cleared for release by the Florida Fish and Wildlife Conservation Commission. LEO was satellite tagged by a Mote Marine Laboratory Sea Turtle Conservation & Research Program biologist before being released into the Gulf of Mexico from Panama City Beach on Jan. 18, 2022. LEO is the first rehabilitated adult male loggerhead being tracked from the Florida Panhandle, a distinct loggerhead subpopulation. He traveled to Cedar Key after his release where he has remained in residence. 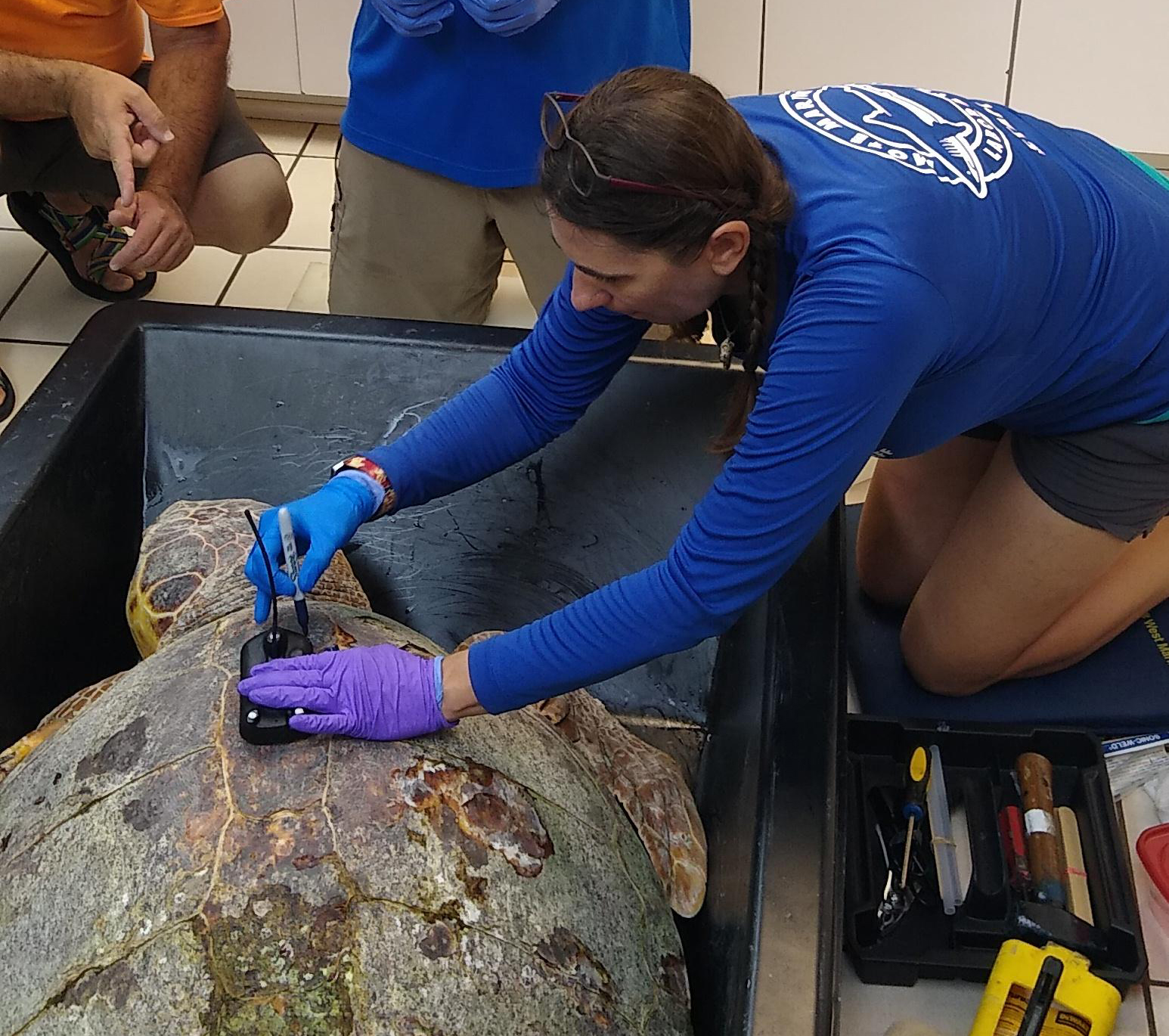 Sheldon, an adult male loggerhead sea turtle, was found and named by his U.S. Coast Guard rescuers near the Old Seven Mile Bridge on Feb. 7, 2022. The 230-pound turtle was entangled in crab trap line and taken to the Florida Keys-based Turtle Hospital, where his wounds were treated. Sheldon was tagged with a satellite transmitter and released off Pigeon Key on Feb. 18, 2022. Sheldon has since traveled from the Atlantic coast of the Keys, around Key West and into Florida Bay. Sheldon is the second adult male loggerhead tracked from the Keys by Mote Marine Laboratory scientists. His satellite transmitter is being reused thanks to divers who retrieved it after it was rubbed off by another tracked turtle.

Looking for a previously tracked loggerhead? Click here for our past turtles.

How do satellite transmitters work?

Researchers attach a battery-powered satellite transmitter to the sea turtle’s upper shell, or carapace. Each time the turtle surfaces, the transmitter sends out data on its geographic location, which can be received by satellites orbiting overhead. In turn, the satellites send the data to scientists’ computers.

Why is my turtle showing up on land?

The data points on the turtle’s location vary in accuracy — the ones that appear to be on land are less accurate, and scientists take this into account when describing the migrations of sea turtles. Accuracy depends on the number of messages the satellite receives from the transmitter, the positions of the transmitter and satellites in relation to each other, and the environmental conditions.

Why is my turtle not transmitting?

Transmissions can only be picked up during short windows of time when certain satellites are overhead and the sea turtle comes up for a breath at the surface. Mote’s tags are programmed to transmit each time the turtle surfaces, though transmissions aren’t always successfully received by satellites. In other cases, tags may be programmed to transmit less often to save battery life. Also, transmissions vary in accuracy (see point 2 above), and Mote’s map does not show the least accurate transmissions. These factors can result in a few days with no received transmissions. Eventually, however, all transmitters stop sending information, and that can happen for several reasons: