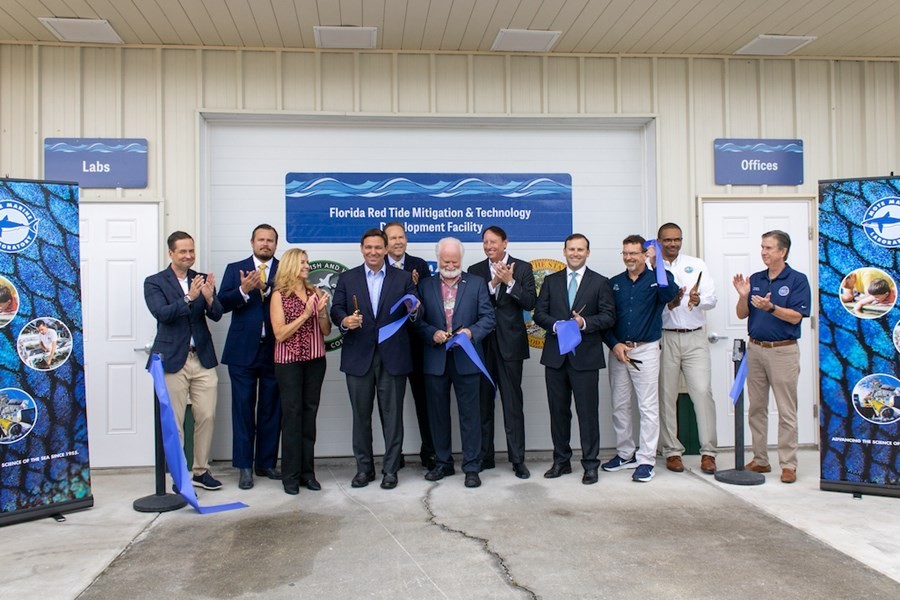 The Florida Red Tide Mitigation & Technology Development Initiative, led by Mote Marine Laboratory in collaboration with the Florida Fish and Wildlife Conservation Commission, is moving closer to finding the technologies and strategies that could be deployed for mitigation efforts during future blooms. Governor DeSantis publicly opened a state-of-the-art recirculating seawater facility located at the Mote Aquaculture Research Park where partnering scientists and engineers from around the country  are testing mitigation technologies before they are deployed in bays and coastal waters in order to ensure they will do no greater harm to these ecosystems that the red tide itself.

Over 25 different partnership projects have been funded since the Initiative was signed in June 2019. Partners range from marine research institutions and universities, to private companies and government agencies. Projects funded under the Initiative use the new facility to test promising research safely, efficiently and stepwise from the laboratory tabletop to small mesocosm/raceways to larger mesocosms to preparation for field deployment.

“The new Red Tide Mitigation and Technology Development Facility at Mote Marine Lab will provide scientists the ability to research red tide, and hopefully lead to new technologies that prevent and mitigate harmful blooms,” said Governor Ron DeSantis. “I am proud that we were able to create this facility through a state partnership between FWC, DEP and Mote Marine, and I look forward to putting it to work.”

“Today is an exciting day as we officially open Florida’s Red Tide Mitigation and Technology Development Facility,” said Mote President & CEO Dr. Michael P. Crosby. “An important part of the Initiative was the development of an incredible technology development and testing facility with dedicated laboratories that include massive Karenia brevis production capabilities, chemical analytics, and seawater mesocosms that mimic coastal ecosystems – all strategically designed to safely test mitigation and control techniques, compounds, and technologies in a controlled setting away from the coast.”

The facilities are located at the Mote Aquaculture Research Park, a 200-acre research and development facility constructed in 2001 to pioneer the development of sustainable aquaculture technology to help feed the world, restock depleted species, and address the need to develop a viable, domestic aquaculture industry in the U.S.

“The concept of mitigating the effects of red tide is certainly a complicated ecological issue,” said FWC Executive Director Eric Sutton. “Through the support of Governor Ron DeSantis and the Legislature, we now have the world’s foremost scientific experts collaborating to determine the possibilities of mitigation.”

Red Tide Mitigation and Technology Development Facility by the numbers: .

In response to one of the most devastating Florida red tide blooms in history, Governor Ron DeSantis signed into law 379.2273 Florida Statutes in June 2019 to establish and support the Initiative as partnership between Mote—a 66-year leader of independent, entrepreneurial and nonprofit marine research with decades of red tide science—and FWC's Fish and Wildlife Research Institute, the primary state-government entity focused on Florida red tide. The bill provides a $3-million appropriation from the General Revenue Fund each year for six years ($18-million total), and FWC will award funds to Mote to achieve the goals of the Initiative.

Read more about the currently funded projects in this January 2021 Initiative report.