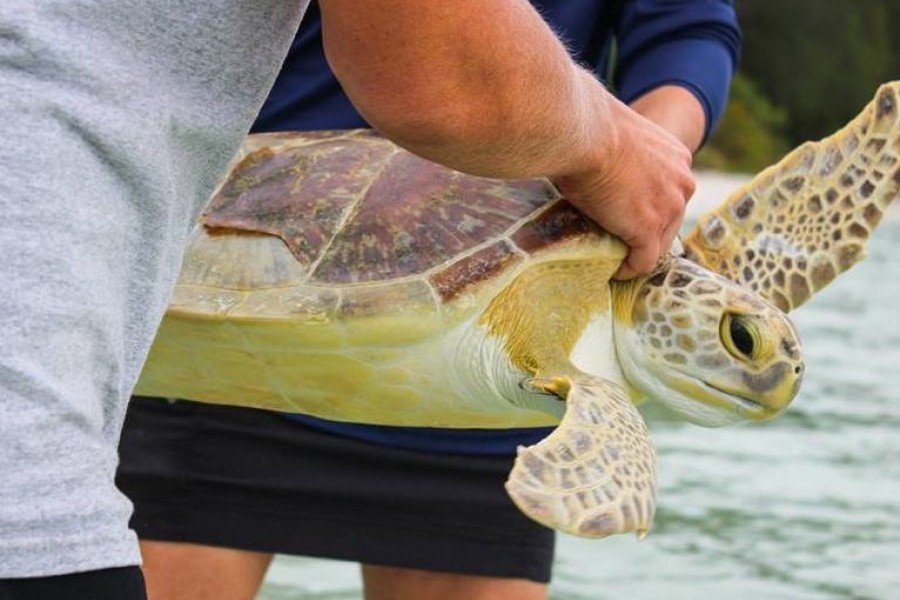 Sales of the Sea Turtle License Plate have funded a portion of the hospital’s surgical laser.

Sales of the Sea Turtle License Plate, administered by the Sea Turtle Grants Program of the STC, have funded a portion of the hospital’s surgical laser with a grant.

Since August of 2021, the surgical laser has been used to treat seven turtles through ten surgeries at Mote’s Hospital.

Fibropapillomatosis is associated with infection by a herpesvirus called Chelonid FP-Associated Herpesvirus or Chelonid Herpesvirus 5. However, the development of tumors is still undergoing research.

These flower-like tumors can form on the body of a sea turtle, including on its eyes and mouth, and can form in internal organs. The condition can vary from mild to debilitating.

Though these tumors are benign, they may grow so large as to inhibit sea turtles’ swimming, vision, feeding and escape from predators.

“Tumor removal is essential in treating pap turtles and hopefully leading to their release,” said Gretchen Lovewell, Program Manager of Stranding Investigations at Mote. “This laser will serve the Hospital for years to come.”

The Hospital, previously utilizing an older laser model from 2007, was in need up an updated laser after finding service and parts were becoming harder to acquire. Part of the Hospital’s success rate is contingent on having the tools necessary to properly treat sea turtles like these.

Funding like this provides Mote’s Sea Turtle Rehabilitation Hospital with the capabilities to treat cases like those of pap turtles. This Hospital is one of the few sea turtle hospitals in Florida with special facilities and training to care for turtles suffering from these tumors.

Pap turtles like Holly and Hill, rehabilitated at Mote, were released following surgeries to remove their tumors.

The two were found entangled and stranded together, and when transported to the Hospital, they were treated for their fibropapilloma tumors. Once they recovered, Mote staff and interns released them at New Smyrna Beach on the East coast of Florida.

To follow our patients on their road to recovery, visit mote.org/hospital/turtle.