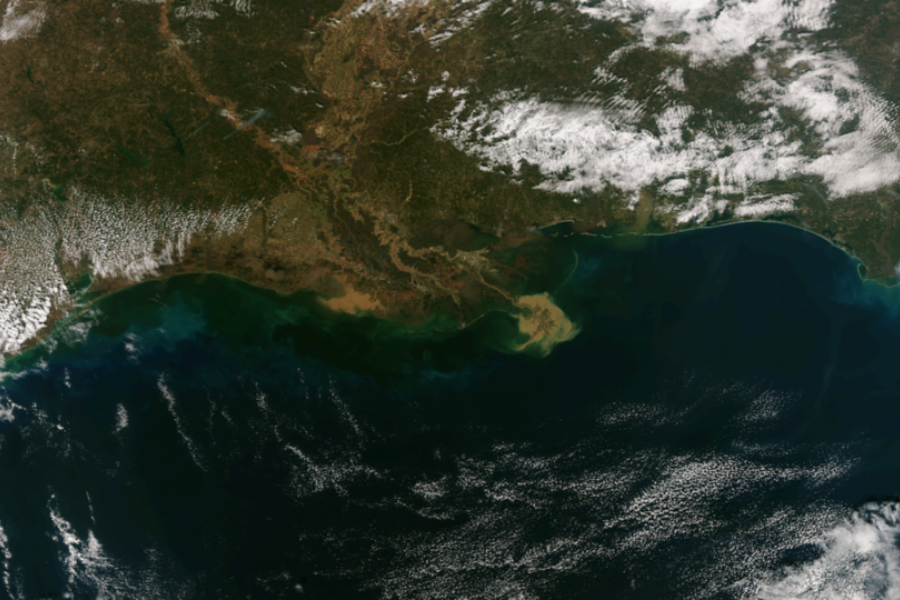 A new scientific journal article reports that carbon dioxide can emerge from the deep ocean in a surprising way — a new piece of the global carbon “puzzle” that researchers must solve to fully understand major issues like climate change.

The article, published recently in the peer-reviewed journal Marine Chemistry, was authored by a Mote Marine Laboratory scientist who performed the research with Georgia Institute of Technology and the Laboratoire des Sciences du Climat et de l'Environnement in France. The study was funded in part by the U.S.-based National Science Foundation and France’s Agence Nationale de la Recherche.

The study looks at organic matter — carbon-rich muck — deposited as deep as 16,400-feet (5,000-meters) in the ocean, far offshore of coastlines with big river systems. Bacteria feed on this muck and release the greenhouse gas carbon dioxide, using certain chemical “ingredients” from their environment in the process. The new study used state-of-the-art, electrochemical techniques to investigate how bacteria do this at two deep-water carbon deposits offshore of Africa’s Congo River and the U.S. Mississippi River mouths. Results suggest these deep-dwelling bacteria are releasing carbon dioxide by using unexpected ingredients — metal ions that were once believed to be rare or absent at such depths. This new finding calls into question how much carbon dioxide is really emerging from some deep deposits, while offering new clues toward finding out.

The study’s focus — the life and times of ocean muck — might sound less than thrilling at first. However, sediments in the sea are an important part of the global carbon cycle, which is full of questions that must be answered to understand some of the most significant processes on Earth.

“The better we can understand the carbon cycle — where the carbon is, when, in what form — the easier it is to model and predict processes like climate change,” said Dr. Jordon Beckler, Postdoctoral Research Scientist at Mote and lead author of the study, which was performed while he was working with Georgia Institute of Technology. “Our study looked at a little-known part of the carbon cycle, at certain sites in the deep sea that are affected by major rivers, and we found that the carbon chemistry down there has some surprising similarities with what we observe in much shallower water. This has important implications for carbon cycling in the ocean.” 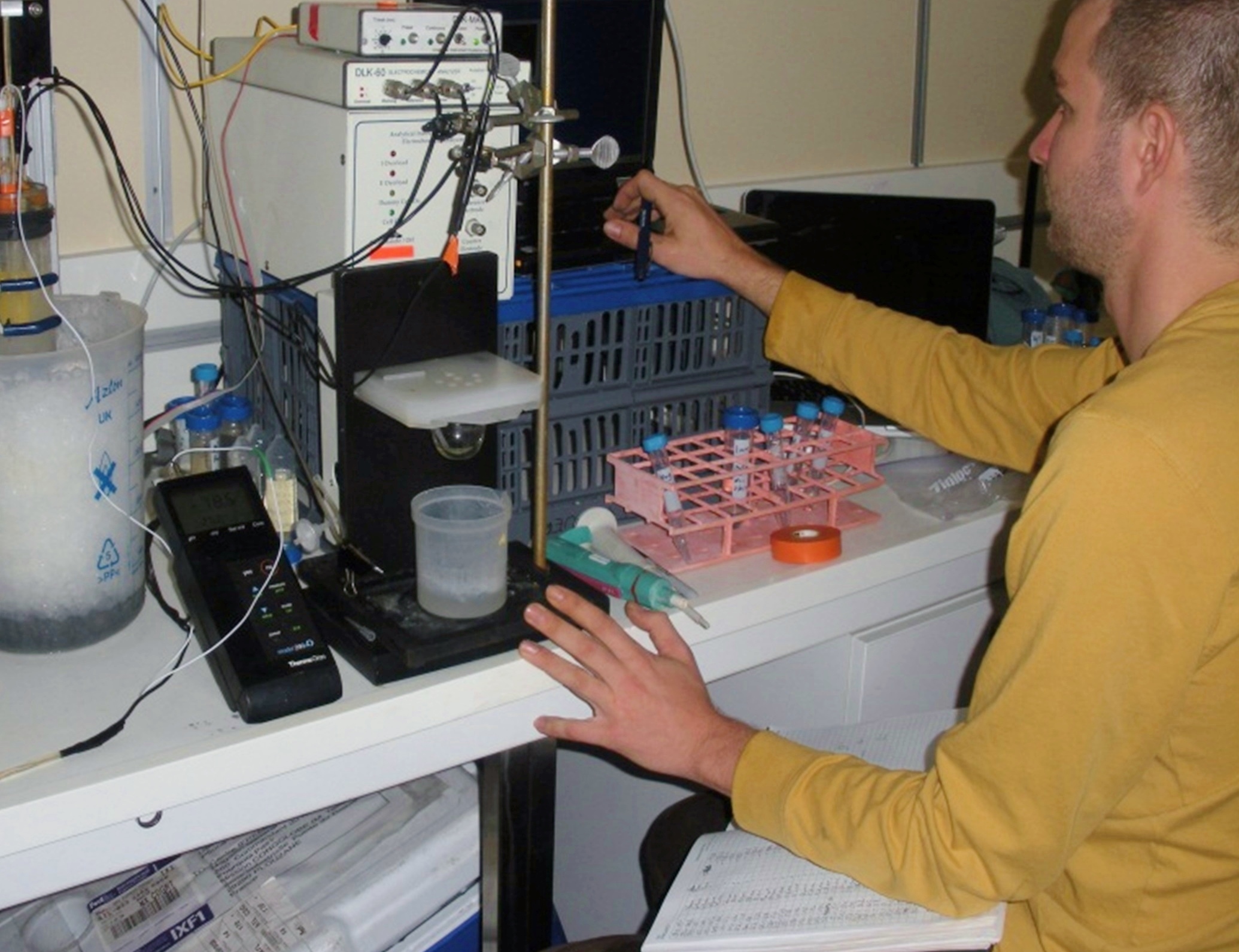 Carbon can be trapped as organic matter in the bodies of living things, such as plants, animals and microscopic plankton. When these organisms die, much of that organic matter is transported to rivers, eventually sinks into the sea and is decomposed by bacteria, releasing carbon dioxide and other compounds. Much of this action takes place in shallower waters over continental shelves, but some organic carbon makes it beyond the shelf, spilling down the continental slope, and it can accumulate at the slope’s base or collect in even deeper places. By knowing how much carbon accumulates in the depths, and how much gets decomposed to release carbon dioxide, researchers can sharpen their models and predictions regarding Earth’s atmosphere, ocean chemistry and climate over the long term. 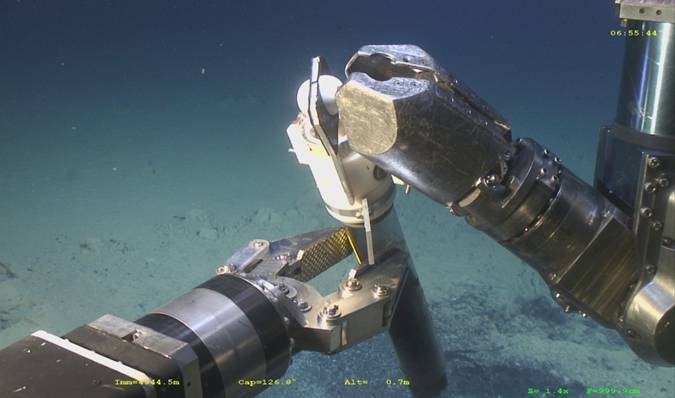 In the recent study, researchers set out by ship in 2011 and 2012 to collect sediment cores — tubes of underwater mud plucked from the seafloor using specialized equipment — and analyzed the sediments in the lab for some key chemicals to reveal what bacteria are doing with the carbon buildup at depth. The researchers stuck an electrode into their sediment cores, and the electrode’s mercury tip gained or lost electrons because of particular chemical compounds in the watery sediment, resulting in changes in the electric current that indicated how much of each chemical was present.

Until now, researchers suspected that bacteria in deep-sea, organic-rich sediments were mainly releasing carbon dioxide from organic matter through one particular process: by “breathing,” or obtaining oxygen from, sulfate. Sulfate is a common, natural chemical in the sea. 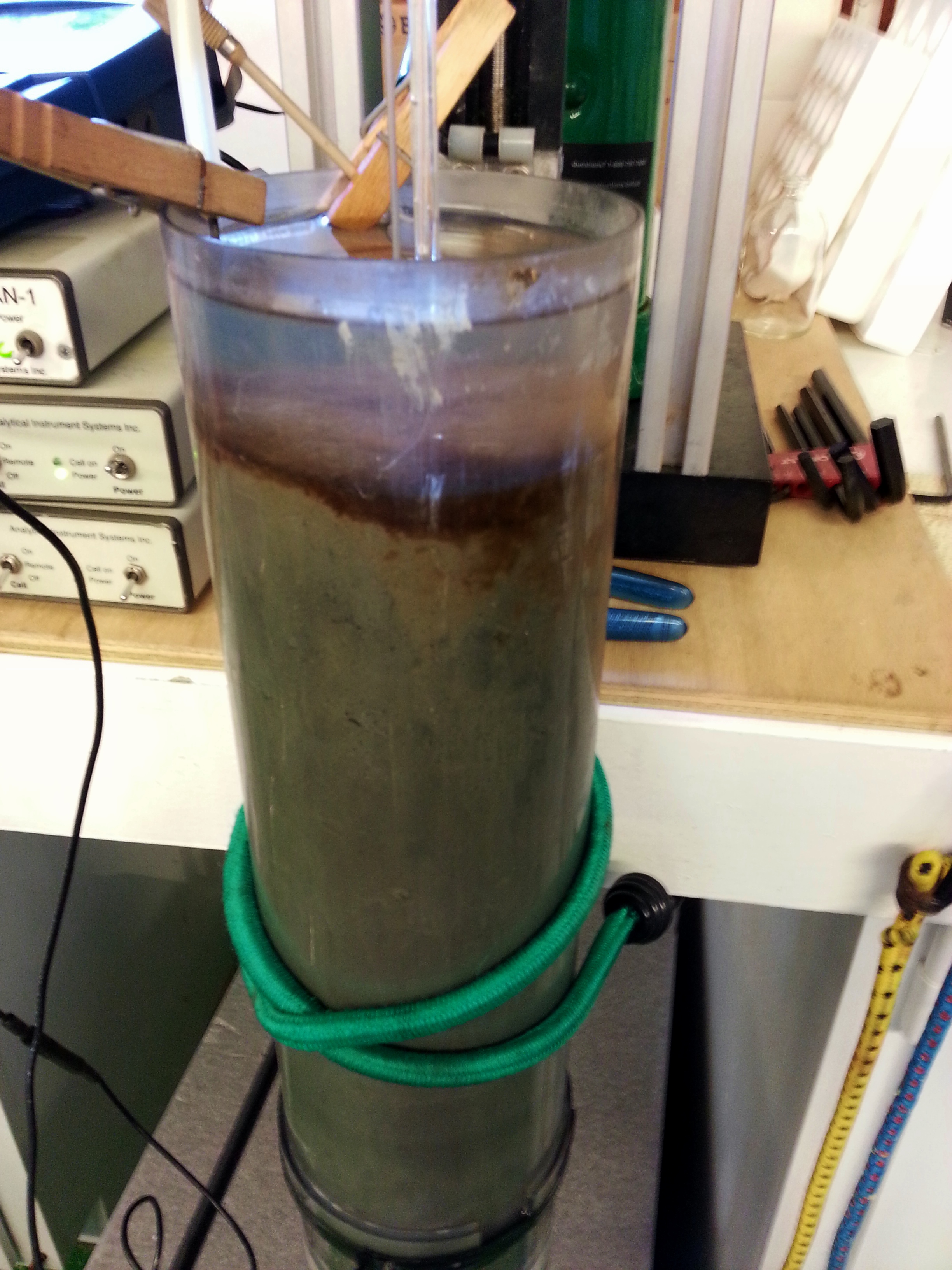 In the last few decades, it was discovered that bacteria prefer to “breathe” using metal oxides (e.g. iron rust) if they are available. These metal oxides are usually lacking in the deep ocean — they mainly come from land and accumulate in coastal sediments.  However, Beckler and colleagues found that high concentrations of metal oxides do, in fact, accumulate in deep sediments surrounding large rivers.

If bacteria are getting a hold of these metal compounds at depth, they might not be using sulfate — and carbon chemistry predictions there might be inaccurate. So might the estimates of carbon dioxide released. Climate modelers: take notice.

“Very few studies have investigated whether these metals get out to these deep regions, and no one knew how much iron there was in deep sediments off the Congo River coast, until our study,” Beckler said. “We found that reactive iron is not only present in the deep sediments of both of our study sites, but that bacteria there process carbon mainly using iron, not sulfate. Most folks had assumed sulfate was the important compound in similar sediments. Ours is the first study to show ‘rust-breathing’ is actually the dominant form of carbon respiration.”

Beckler added: “More research is needed to fully understand how much carbon dioxide is escaping from these two sites, but the evidence so far suggests that these areas may release more of it than we previously thought.”

The team chose these two sites for good reason — both have chemistry influenced by big rivers, increasing the chances that metals from land might be carried to the deep sea. Thanks to the Mississippi river, mud is carried far out and spills over the edge of the continental slope, most likely during winter storms. Meanwhile, the Congo River sends mud and clay particles directly through an underwater canyon and into the depths, where they spread out in a deep sea fan.

“When it comes to chemistry, the Congo deep sea fan reminds me of a shallow, coastal ecosystem transported to the deep ocean,” Beckler said. “It’s the most interesting study site – a natural laboratory, if you will.”

Is this kind of site rare? How much does this surprising, deep sea chemistry matter in the global scheme of the carbon cycle?

The study authors note: “Several large rivers in Asia or Oceania (e.g. the Ganges, Yellow, and Irrawady) discharge high concentrations of iron-rich suspended sediment beyond their shelves, and even arctic rivers may transport terrigenous (land-derived) material off-shelf via pack ice.” However, the authors say more research is needed, as “iron biogeochemistry in deep continental margin sediments adjacent to these rivers has yet to be investigated.”

In other words, these kinds of metal ions probably reach the deep ocean more often than expected — and play a greater role in carbon cycling than once believed. For a better understanding of the carbon cycle, scientists must iron out these details.