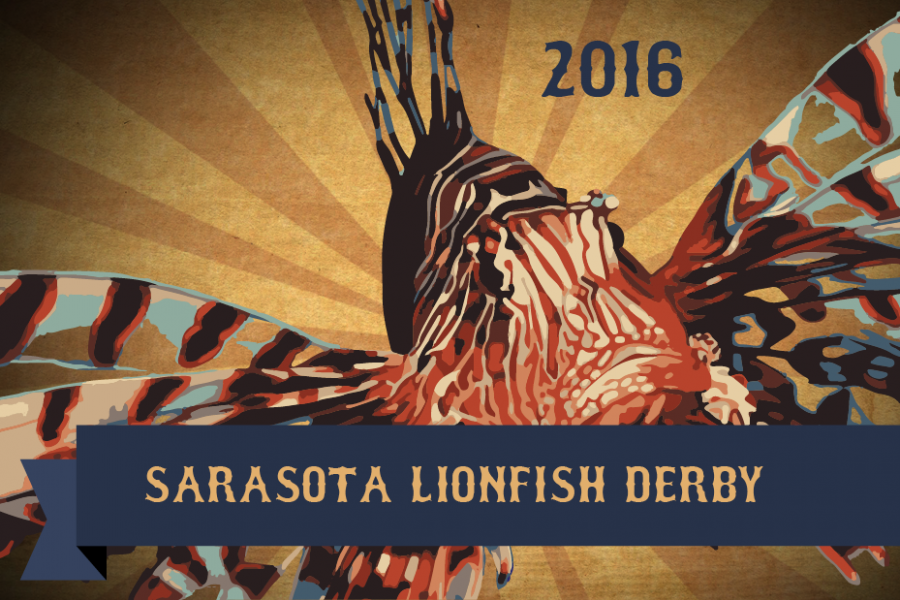 Join Mote Marine Laboratory for the third annual Sarasota Lionfish Derby, which invites scuba divers to compete for more than $3,500 in cash prizes by netting or spearing lionfish in an effort to control the spread of this invasive species.

The derby will take place from July 8-10 with its home base at Mote, 1600 Ken Thompson Parkway in Sarasota, Florida. This derby is the first of four in the 2016 Summer Lionfish Derby Series coordinated by Reef Environmental Education Foundation (REEF). On July 10, top local chefs will prepare lionfish dishes during the derby’s public event at Mote. Details below.

The Sarasota derby is a partnership effort among Mote, a world-class marine science institution, REEF, which helps study and address the lionfish invasion and sanctions official Lionfish Derbies, and ZooKeeper, the leader in lionfish containment throughout invaded areas.

The Indo-Pacific lionfish (Pterois volitans) has invaded coastal habitats of the western Atlantic Ocean over the past two decades and has the potential to cause major ecological changes in reef fish communities. These efficient predators are venomous, reproduce frequently and year-round, and they pose a major threat to Florida’s native species and ecosystems. They consume more than 70 different species of fish and crustaceans, and in heavily invaded areas they have reduced fish populations by up to 90 percent and continue to consume native fishes at unsustainable rates.

The Sarasota Lionfish Derby is designed to support the research efforts of Mote scientists and their partners. Each lionfish harvested can provide scientists with tissue samples and valuable data such as length, weight, stomach contents and stage of sexual maturity. Collecting data on local lionfish populations year after year helps scientists study population dynamics, behavior and adaptations over time.

The Sarasota derby will include a captains’ meeting on July 8, lionfish hunting on July 9 in the Gulf of Mexico from Collier County to Escambia County and the lionfish weigh-in and awards ceremony on July 10. Teams can net or spear lionfish while scuba diving or snorkeling alongshore or offshore. Teams must arrange their own boat transportation and gear.

The captains’ meeting is mandatory for at least one team member and will be held from 6:30-7:30 p.m. Friday, July 8, in the WAVE Center auditorium on the first floor of Mote’s main campus (abutting Mote Aquarium). The meeting provides derby rules and important information on how to collect and handle lionfish properly and safely.

People handling lionfish are strongly encouraged to wear gloves for protection against stings from the venomous spines. At the captain's meeting, REEF will have puncture-resistant gloves for purchase at discount for derby participants, along with ZooKeeper lionfish containment units for purchase. In addition, captains’ meeting participants will have the opportunity to participate in a brief, anonymous survey about their involvement in derbies — one way to help organizers better understand and serve the communities who participate.

Lionfish removals will take place from the end of the captains’ meeting until the weigh-in and scoring, which starts at 12 p.m. on Sunday, July 10, in an outdoor site near Mote’s WAVE Center.

Starting at 12 p.m. that day, Chef Steve Phelps from Indigenous Restaurant, Executive Chef Gerard Jesse from Seafood Shack, Chef Paul Mattison, executive chef and proprietor of Mattison’s, and Erik Walker, Culinary Director of Beach House will prepare special dishes with the lionfish caught during the derby and provided by ZooKeeper. The public is invited to sample the lionfish dishes for free.

The awards ceremony will start at about 3 p.m. on July 10. More than $3,500 in total cash prizes will be awarded for first, second and third place winners who catch the most lionfish, the largest lionfish and the smallest lionfish. Winners will be announced after weigh-in.

Registration is $120 per team, and teams must include two to four people.

The third annual Sarasota Lionfish Derby is looking for sponsors! For more information, contact Kate Knepper at (941) 388-4441 x 393 or kknepper@mote.org.