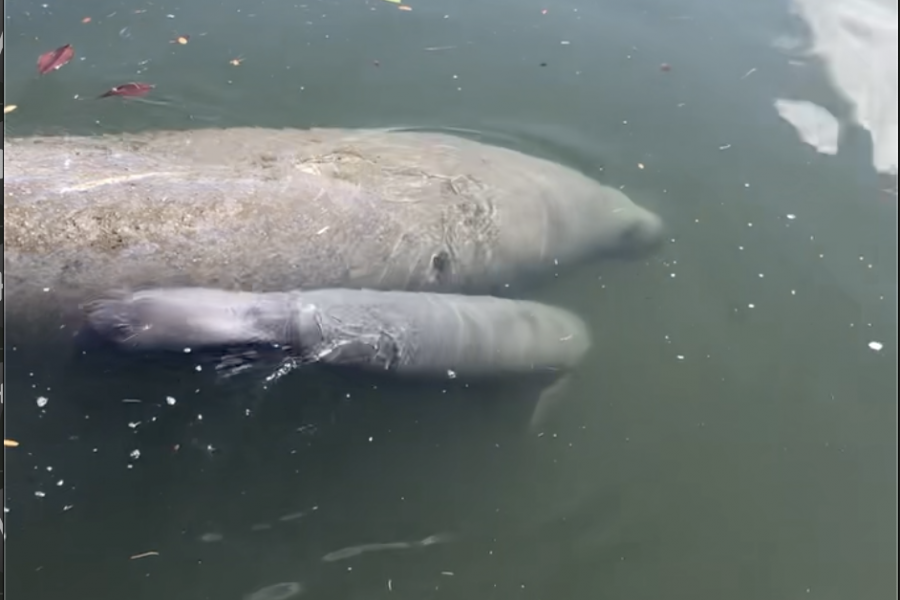 The mother manatee and her newborn calf. Credit Robert and Cindy Burnett

When Cindy Burnett called Mote Marine Laboratory’s 24/7 marine animal stranding hotline on April 12, 2021 about a manatee she thought was in trouble, she at first had no idea what they were actually witnessing: a female manatee giving birth!

Burnett was at home in Siesta Harbor when she noticed a manatee acting strangely in the water. Burnett is a volunteer at Mote Marine Laboratory & Aquarium, and knew to immediately call Mote’s Standing Investigations Program (SIP) 24/7 hotline (888-345-2335) to report the behavior. While on the phone with Staff Biologist Amber Lea Kincaid, everyone realized the manatee was in a different kind of distress that human moms will understand: the manatee was giving birth!

“I was really glad they called us and shared the video with us,” said Kincaid. “Whenever someone sees a sea turtle, manatee, dolphin or whale in distress in Sarasota or Manatee counties, they should immediately call our hotline, and never attempt to assist any animal. Taking videos is also very helpful for us, so when we arrive on scene, we can be prepared for what’s going on. And in this case, we knew that we didn’t need to respond at all!”

Check it out the video and read more below!

The manatee mom was identified by Mote’s Manatee Research Program (MRP), which conducts photo-identification surveys and contributes to a statewide database of cataloged manatees. By using the unique scars on their backs and tails, many of which are caused by watercraft interactions, researchers can identify individual manatees and learn about their life histories (reproduction and mortality), habitats they like to frequent and why, behaviors, and more.

Staff Biologist Jennifer Johnson was able to look through past records to learn a little more about this mom. “We first documented this manatee, U2494, in January 2005 at Lee County Manatee Park in Ft. Myers, and we had 10 total sightings of her from 2005-2019. We’ve also documented at least three other calves with her throughout the years, making April 12th’s birth at least her fourth. Our sightings usually had her around the Ft. Myers power plant in the winter and then several locations around Sarasota Bay in the summer.”

In addition to photo identification, Mote’s MRP also conducts aerial surveys to estimate population distribution and monitor manatee’s seasonal movements. The surveys are funded through a grant from Sarasota County’s West Coast Inland Navigation District (WCIND) Waterway Development Program. Aerial surveys conducted this month indicate that many manatees in the region hadn’t made it all the way to their preferred summer sites quite yet.

“We also saw quite a few manatee mom and calf pairs from the air around Sarasota County this week, including U2494 and her newborn calf,” said Kerri Scolardi, Senior Biologist. “Many manatees are still in their spring distribution areas, so we can expect to see a lot of manatees on the move in the coming weeks, including mom and calf pairs, as local waters continue to warm. This is a very important time for everyone recreating out on the water to remain vigilant in abiding by best practices to keep manatees safe.”

Watercraft collisions, often deadly, are the leading human-related causes of death for manatees. As manatees are on the move, and soon-to-be-summer will lead to more recreational boat activity, the following are ways for boaters to help keep manatees safe:

Presently, FWC is investigating a high level of manatee mortalities and responding to manatee rescues along Florida’s Atlantic coast. Learn more about this Unusual Mortality Event here. While FWC continues to investigate this event, it’s of critical importance for the public to continue to abide by best practices to keep local manatees safe, even outside of the high-mortality area. In Sarasota and Manatee counties, Mote’s SIP assists FWC to respond to distressed or deceased manatees. For example, they recently aided in the rescue of five cold-stunned manatees earlier this year (read about two of these rescues here).