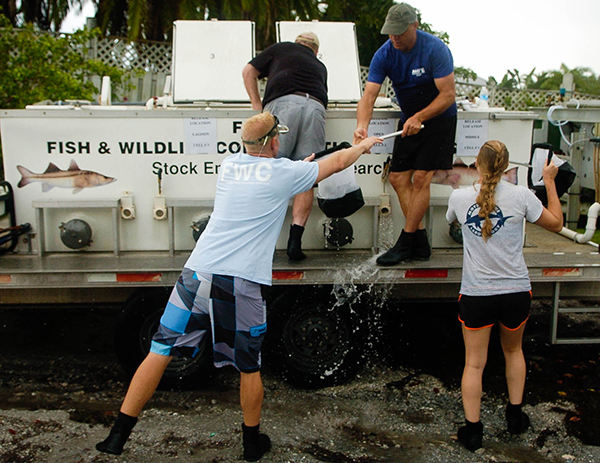 On Aug. 15, 2014, scientists with Mote Marine Laboratory and Florida’s Fish and Wildlife Conservation Commission released hatchery-reared juvenile snook into the wild as part of an ongoing program designed to find the most effective methods to replenish and enhance wild snook populations.

The species is one of Florida’s most popular sport fish and plays an important role in drawing recreational anglers to the state. According to the American Sportfishing Association, Florida is the top-ranked state in economic output from recreational fishing, which draws $8.6 billion to the economy annually. Saltwater fishing alone generates 80 percent — $6.8 billion — of that income.

Snook, along with red drum, are the main test species for restocking efforts statewide. This project — which involves tagging and then releasing more than 2,200 snook into Sarasota Bay during over three days — is designed to determine whether snook that have been conditioned for release at Mote have better growth and survival rates in the wild.

This event is a key example of Mote’s efforts to develop and support public-private partnerships for the conservation and sustainable use of our marine resources. The snook release is possible now thanks to a private donation to Mote and from funding provided by FWC. For more than 25 years, Mote and FWC scientists have partnered on studies designed to increase the effectiveness of stock enhancement in Florida; their work on the topic is followed globally.

Past Mote and FWC research conducted through pilot snook releases that took place between 1997 and 2006 has shown that hatchery-reared fish released into the wild can indeed contribute to the local fishery with the fish growing to adulthood. And, in fact, tag data recovered following these small-scale pilot release experiments showed that using the knowledge we gained, we were able to improve the survival rate of stocked fish by more than 200 percent.

“We’ve found over time that we can improve the survival of hatchery snook released into the wild by 10 times just by choosing the right habitat,” said Dr. Kenneth Leber, Associate Vice President for Mote’s Directorate for Fisheries and Aquaculture. “We also know that there are limits on how many fish you can put in each habitat before you start to lose hatchery snook. These pilot studies we’re doing now are further defining the best methods for snook stock enhancement.”

Such findings are key to developing large-scale stocking techniques that are financially and environmentally feasible that can help rapidly boost populations of species affected by overfishing or natural phenomenon like the 2010 winter cold spell that resulted in the deaths of millions of snook and the closure of the fishery. Snook populations have only recently rebounded on the Gulf Coast from that event enough that FWC was able to reopen the fishery earlier this year.

This latest experiment will look at the survival in the wild of 2,000 juvenile snook that were born and raised at Mote Aquaculture Park in eastern Sarasota County. The Park is Mote’s aquaculture research and development test-bed where we are developing new methods for spawning, hatching and rearing marine species for restocking purposes and for human consumption. Many of these studies are conducted in partnership with FWC biologists.

“FWC and Mote Marine Lab have worked together since 1985 to advance marine stock enhancement in Florida,” said Chris Young, Director of FWC’s Stock Enhancement Program. “We’re excited to continue our partnership with Mote Marine Lab in support of these snook releases.”

For this release, FWC and Mote biologists inserted PIT tags — passive integrated transponder tags — in the juvenile snook before release. These small, 23 mm-long tags are about the size of a pencil eraser and each one transmits a unique identifying number. The transmissions will be picked up by underwater antennae placed by scientists near the release site in the wild. These antennae will listen for the released snook as they swim by and each time a tagged snook passes through the array, a receiver will record the movement.

Scientists will also use seine nets to periodically gather snook and evaluate growth rates, compare performance between wild and hatchery snook and determine whether the released fish are contributing to overall snook abundances.

One key to the study is the conditioning that some of the snook have undergone prior to release, Leber said. “We have a control group of fish that have been raised in traditional aquaculture manner — in bare tanks using artificial feed. We also have a group of conditioned fish that have been fed live prey for three days prior to their release. We’ve also placed structures into their tanks, which mimics the structure fish will have in the wild. We think these two factors will help hatchery-reared snook be more prepared for life in the wild — with a better ability to hide from predators and ready to hunt for prey of their own.” 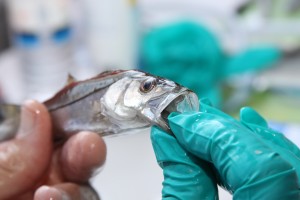 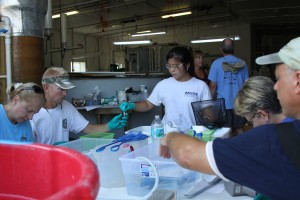 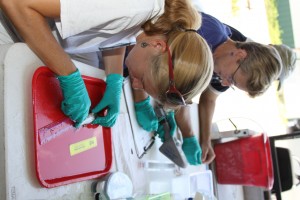 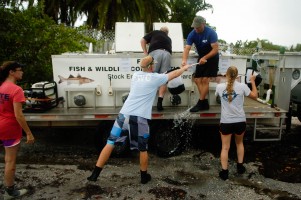 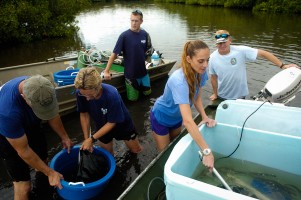 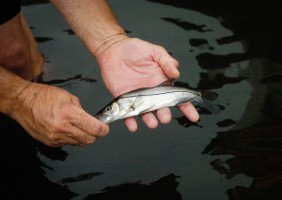 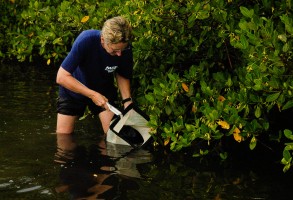