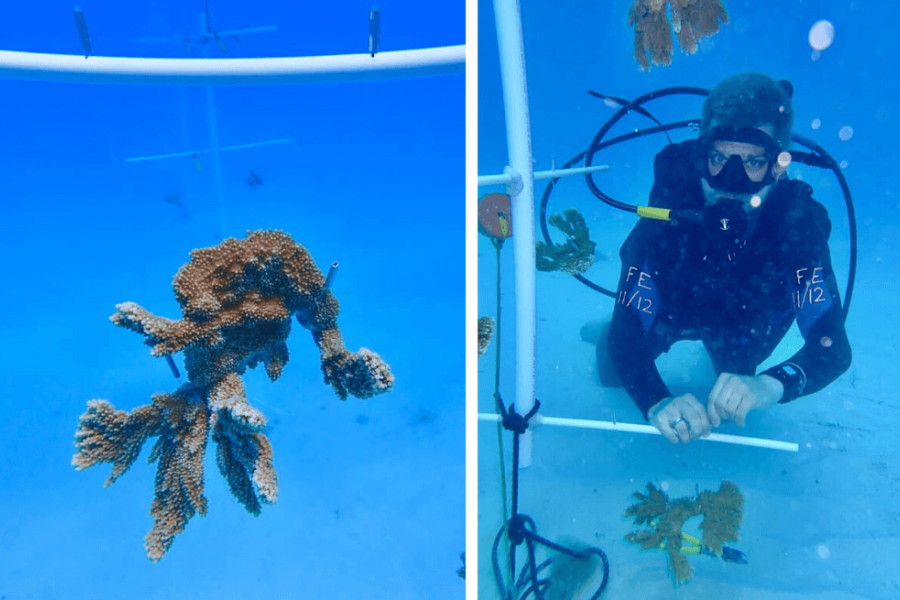 Mote Marine Laboratory scientists are launching a new, underwater spawning nursery for elkhorn coral, with the goal of strategically breeding and restoring this rapidly declining, native species that is at risk of disappearing from Florida’s Coral Reef in our lifetime.

Elkhorn coral (Acropora palmata) was once dominant on Florida and Caribbean reefs, but its populations have declined 97% in the past four decades, particularly due to white band disease. The species is also threatened by climate change impacts, including warming ocean temperatures, ocean acidification, and intensifying hurricanes. While elkhorn coral seems unaffected by the current, major outbreak of stony coral tissue loss disease, it’s in serious trouble nonetheless and has been listed as threatened under the Endangered Species Act since 2006. On monitored areas of Florida’s Coral Reef (also known as the Florida Reef Tract), elkhorn coral appears to be declining at accelerating rates, failing to reproduce sexually, and in turn, failing to contribute new offspring that can replenish depleted adult populations, disperse to other reefs, or provide novel genetic diversity crucial for sustaining populations into the future.

Coral sexual reproduction is a process in which sperm and eggs from two different corals of the same species combine, and during that process, genetic material from both parents is exchanged (“recombined”), which leads to the production of new offspring with different combinations of genes (traits). Some offspring may inherit certain combinations of traits that make them more tolerant of new environmental change or stress, and in turn, better able to adapt and survive.

“On the Florida Reef Tract, Acropora palmata is in a perilous state, with severely limited numbers of wild colonies remaining, only nominal genetic diversity and persistent reports of failed sexual reproduction including no or asynchronous spawning and no new natural recruitment,” said Mote Postdoctoral Research Fellow Dr. Hanna Koch.

For sexual reproduction to be successful, genetically diverse coral colonies need to be closely and densely populated, and spawn—release sperm and eggs—at the same time (with high “synchronicity”) so the sperm can fertilize the eggs. “Recruits” are coral offspring produced through sexual reproduction and represent the next generation of genetically diverse individuals to “recruit” back into a self-sustaining population. Without these attributes, this species faces functional extinction in this region because numbers are so low they can hardly provide essential ecosystem services, like reef structure and habitat, nor can they produce the next generation necessary for population persistence.

Now, however, new elkhorn corals don’t tend to appear on Florida’s Coral Reef unless restoration practitioners plant them there. Scientists at Mote’s Elizabeth Moore International Center for Coral Reef Research & Restoration (IC2R3) have planted nearly 4,000 elkhorn corals in the past two years, mainly by obtaining recruits from collaborators several years ago, propagating them asexually by fragmenting them into smaller pieces, and then growing them out in Mote’s land-based nursery. While this process does not increase genetic diversity, because each fragment has the same genetic makeup as the coral it was cut from, it does allow for rapid upscaling to produce more corals quickly. This effort is part of Mote’s longstanding, science-based Coral Reef Restoration Program that has planted more than 76,000 corals of several native species onto depleted reefs since 2008.

With elkhorn corals severely depleted in the wild, it’s critical to ramp up elkhorn research, breeding and restoration as Mote has done with other key species. For certain species such as staghorn coral, Mote scientists are cultivating a relatively diverse group of genotypes (different genetic varieties within a given species), actively investigating which genotypes are resilient to environmental stressors and conducting managed sexual reproduction efforts to produce more genetically diverse and stress-tolerant corals for restoration. For elkhorn coral, scientists have access to fewer colonies of fewer genotypes, and more research is needed to determine if any of those genotypes are stress resistant.

“Setting up our own spawning nursery is a critical step toward producing more genotypes of this species through sexual reproduction, to support research and restoration along the Florida Reef Tract,” said Koch, who worked with Mote colleagues to transfer growing fragments of elkhorn coral to modified PVC “trees” in their new underwater spawning nursery. There, the corals will grow to a sexually mature size.

“With this new nursery, we will sexually propagate these corals in two ways: First, we will bring some of them into the lab right before their annual spawning event in August and opportunistically collect and cross egg and sperm from corals that spawn on the same night to produce new offspring,” Koch said.  “With this method, we have less control over who spawns, when and which genotypes are crossed. Alternatively, we plan to induce spawning in the lab by placing the corals in a special aquarium that simulates all of the environmental cues needed for the corals to develop gametes (sperm and eggs) and spawn. This is a new method that allows one to essentially control the sexual cycle, and with greater flexibility and reliability. Before we conduct managed breeding, the idea is that these corals will be tested for traits such as disease resistance and heat tolerance, and this information will help determine our breeding choices. Ultimately, both methods allow us to produce genetically diverse, stress-tolerant offspring.”

These efforts with elkhorn corals aim to mirror Mote’s successes with staghorn coral and other species.

Given the dire situation elkhorn corals are in, scientists from Mote and multiple partnering institutions are joining forces in a new collaboration led by the National Oceanic and Atmospheric Administration (NOAA) to exchange knowledge and expand access to coral genotypes in hopes of securing the species’ future.  Jennifer Moore, NOAA’s Protected Coral Recovery Coordinator, said, “While elkhorn coral declined significantly and is facing serious threats, I am buoyed by all of these amazing partners’ response to our call to action. I know that we can make great strides toward recovering the important elkhorn coral and improve the status of Florida’s Coral Reef.” Together, the partners will tackle priority actions like mapping the locations of remaining wild elkhorn coral, identifying which colonies have already been sampled and identified by genotype, developing a strategic and coordinated sampling effort for the remainder, and establishing a standardized method for genotyping.

“Mote scientists are able to carry out every step essential for resilient coral reef restoration, including: coral sexual reproduction; growing corals from microscopic larvae to adult colonies; producing more colonies through fragmenting corals asexually; testing coral genetic varieties for resilience to disease, climate change and related stressors; planting corals onto damaged reefs; and raising corals to maturity to start the process again,” said Mote's President & CEO, Dr. Michael P. Crosby. “However, the restoration of this threatened species is bigger than any one institution can accomplish on its own. Only through strategic partnerships can we better document which genotypes are already represented within nurseries, exchange genotypes among partners to maximize restoration success along Florida’s Coral Reef, and advance efforts to sexually propagate the corals. To help make that last step a reality, Mote’s new elkhorn nursery is laying critical groundwork today.”