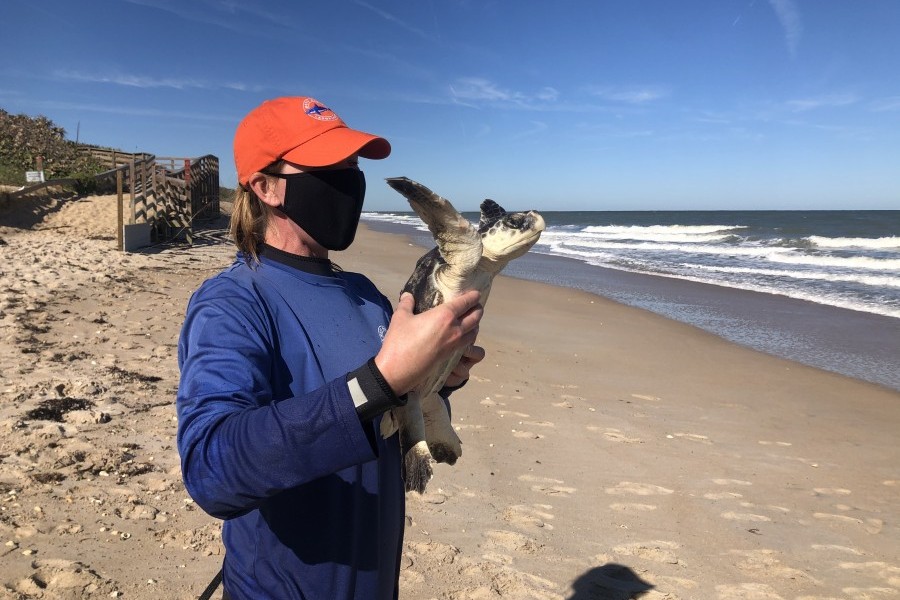 The nine turtles came into Mote's care after stranding in a cold-stun event in November in the Cape Cod region. As ectothermic (commonly called "cold-blooded") animals, sea turtles are not able to regulate their body temperatures on their own, and when they find themselves in too-cold water, they become lethargic. This can be potentially fatal as their body functions slow down, leaving them susceptible to predators and boat strikes, allowing algae to grow on their backs, and more.

Since Nov. 21, Mote has received three separate groups of cold-stunned turtles, totaling more than 20 turtles. This year's cold stun event in New England has caused more than 900 strandings, as networks of volunteers, state and federal agencies, and nonprofits work around the clock to fly the turtles to various rehab facilities across the U.S., including Mote's Sea Turtle Rehabilitation Hospital in Sarasota.

After being cleared for release, the nine turtles were given a last physical check and implanted with a PIT tag (passive integrated transponder). These small microchips function much like pet microchips, allowing the animals to be identified if they strand again.

Since the turtles originally stranded in the Atlantic Ocean, Mote's team drove the turtles across the state for release from the east coast of Florida, in New Smyrna at Canaveral National Seashore.

The nicknames of the turtles released today are: Art, Canaan, Douglas, Fraser, Noble, Linus, Peppermint Patty, Schroeder, and Charlie Brown. Read more about each patient, and the other's remaining in Mote's care, at mote.org/hospital. The third group of cold-stunned turtles that arrived at Mote on Dec. 22 are still in critical condition.

Kemp's ridley sea turtles are considered endangered by U.S. Fish and Wildlife Service and Critically Endangered by the International Union for Conservation of Nature and Natural Resources. Kemp's ridley sea turtles are generally considered the most endangered species of sea turtle, with threats to their population including rising water temperatures, degradation of habitat and nesting areas, and entanglement in marine debris.