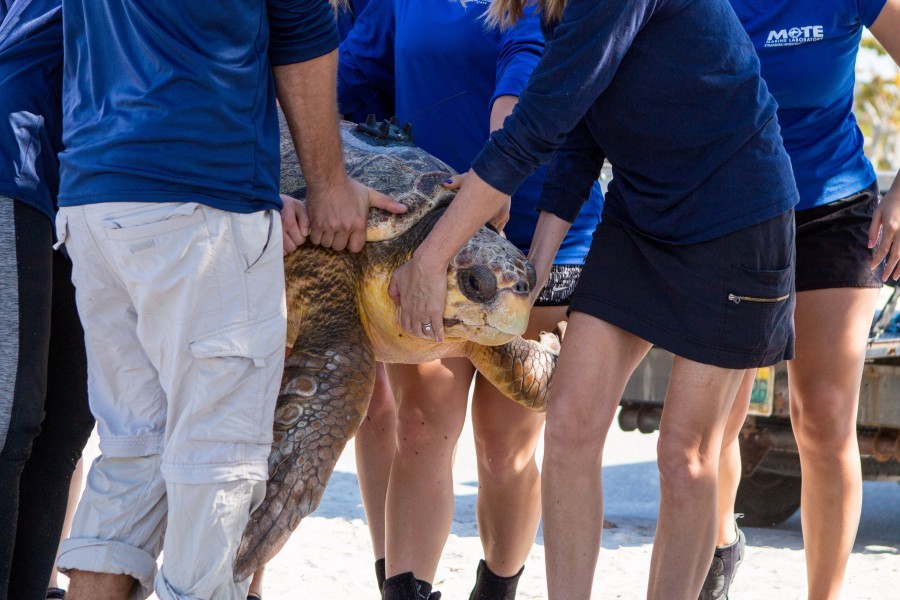 Friday, Mote Marine Laboratory released a subadult male loggerhead named “Sea Salt” off Lido Beach. Prior to release, Sea Salt was fitted with a satellite tag and can be tracked at seaturtle.org.

“The release went very well,” said Lynne Byrd, Medical Care and Rehabilitation Coordinator for Mote. “It is always a great day when we are able to release these animals back to their home.”

Local anglers found the turtle floating one mile off Holmes Beach in Manatee County on Oct. 30, 2016. The turtle was transported to Mote’s Sea Turtle Rehabilitation Hospital where upon arrival he seemed very lethargic. Because Sea Salt did not have any interest in eating when he first arrived at Mote, Mote medical staff gave the turtle daily fluids. The animal was also given antibiotics to treat an elevation of white blood cells due to infection.

On the day of release, Mote’s Sea Turtle Conservation and Research Program fitted Sea Salt with a satellite tag, a tracking device about the size of a cell phone that transmits data when the turtle surfaces to breathe. Satellite tags allow scientists to better understand how rehabbed turtles reorient in the wild.

"By tracking turtles like Sea Salt, we can learn more about the behavior of adult male sea turtles; they never return to land like females do, so it's difficult to study them,” said Kristen Mazzarella, Mote Senior Biologist. "The satellite tag will allow us to follow his post-release travel as it sends us his location when he comes to the surface of the water. Fortunately, we can compare this turtle to other tagged loggerheads that have been tracked by Mote and other institutions around the Gulf."

With satellite tags, scientists can monitor whether an animal’s movements relate to or overlap with changing environmental conditions such as water temperature and red tide. These tags can also collect depth data and teach scientists more about an animal's diving behavior.

Mote has been placing satellite tags on nesting sea turtles since 2005 and opportunistically tags adult males that have been rehabilitated at the Mote Sea Turtle Rehabilitation Hospital.

Prior to 2017, Mote has fitted 125 sea turtles with satellite tags (some on the same turtle a few years later), five of which were rehabilitated adult males that can be found on seaturtle.org. Their names are Bruno, Joey II, King, Murph and Zach.

“We have learned from previously tagged males that they travel long distances to encounter females during nesting season and that males also have foraging grounds which they use annually,” Mazzarella said. “While we often retrieve the satellite tags from females when they return to the nesting beach, we actually hope Sea Salt’s doesn’t return and continues to transmit his ocean locations for up to two years and teach us about where adult males hang out, their diving behavior, speed, whether they are at the surface a lot or spend most of their time under water or whether their behavior changes from season to season or year to year and what types of environments they are using.”

The last adult male loggerhead Mote tagged was Murph in 2013.