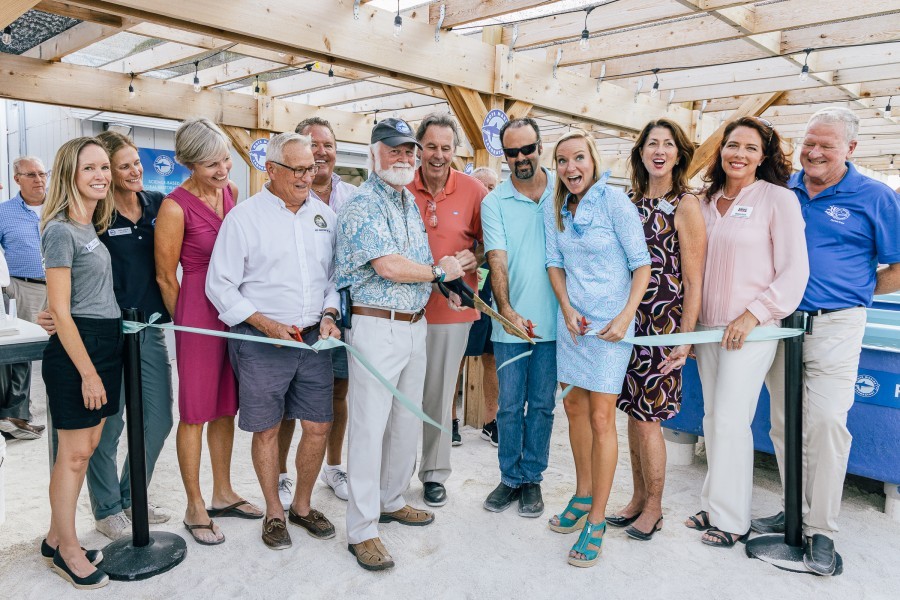 Mote Marine Laboratory & Aquarium is pleased to announce the official opening of its second satellite coral nursery at the Reefhouse Resort & Marina in Key Largo, Florida. The facility joins Mote’s main Keys lab, the Elizabeth Moore International Center for Coral Reef Research & Restoration on Summerland Key, and a satellite nursery at Bud ‘N Mary’s Marina in Islamorada, which opened in 2021. The additional nursery at Reefhouse is Key Largo’s first land-based nursery and is yet another milestone in Mote’s continued dedication to expanding coral restoration efforts in response to the dire needs of Florida’s Coral Reef.

“Although Mote is nearly 70 years old, we’ve also been in the Keys now for nearly 30 years, so we are extremely excited to open the first land-based nursery here in Key Largo,” said Mote President & CEO, Dr. Michael P. Crosby. “We are committed to bringing Florida’s Coral Reef back from the brink of functional extinction, and to accomplish that, we continue to seek ways to expand our science-based coral reef restoration capacities and impacts, while strengthening our active engagement with members of the community, such as at Reefhouse Resort, along the way.”

Mote’s new Key Largo coral nursery location at Reefhouse Resort was selected for a combination of factors, including both environmental quality and the ability to connect with both the visitors and community residents. This furthers the mission of Mote to translate and transfer the outcomes of research to help increase broader ocean literacy and public awareness by partnering with diverse stakeholder groups including Keys residents and visitors, hotels and the broader tourism industry, nonprofits, local schools and government agencies.

“Not only will the guests staying at our resort be able to get an up-close view of science in action, we’ll also provide opportunities for our community members to do the same,” said Mark Walsh, Vice President of Ocean Properties Hotels Resorts and Affiliates. “If coral reefs were above the water and all of the public, not just divers and snorkelers, could see them dwindling away and going extinct before their eyes, everyone would want to help restore these rainforests of the sea. Working with Mote to not only house a coral nursery, but also educate tourists, means that when they drive back to the mainland, hop back on their cruise ship, or fly back to the Midwest, they’ve left with a better understanding of the value and beauty of coral reefs, and how we can all be part of the solution to save them. I am proud that our location serves as Key Largo’s first land-based nursery and that scientists will be working right here on-site to save our backyard coral reef treasure. Our visitors and community residents should be proud too.”

Joining Crosby and Walsh at the ribbon-cutting ceremony was Monroe County Commissioner Holly Merrill Raschein. During her time in the Florida House of Representatives, Merrill Raschein was key in securing initial state funding for Mote’s coral restoration efforts. Merrill Raschein, a SCUBA diver herself, helped plant the first Mote-grown corals alongside Crosby at a Key Largo reef the day after the ribbon cutting. “Every time I get the chance to dive and help restore corals alongside the Mote team, I’m able to see the direct impact that our support has on our local environment,” said Merrill Raschein. “We can see the areas where our reef has degraded, but we also see the places where Mote’s restored corals are thriving and improving the ecosystem.”

Florida House Representative Jim Mooney (District 120) joined the ceremony to celebrate and present a $1 million check representing the significant state appropriation that he was instrumental in securing for Mote-led coral restoration efforts this year. “Mote’s science-based coral restoration not only benefits Monroe County, but the entire State of Florida,” said Mooney. “Healthy coral reefs are vital to Florida’s economy and environment, so investments in coral restoration are investments in preserving a key Florida resource and our quality of life.”

Mote’s demonstrated success in coral restoration and research includes planting tens of thousands of corals each year, with 90% of those outplants surviving past the key 1-year mark. Also leading the way in coral breeding and genetic diversity efforts, Mote is the only organization completing the entire restoration loop under one entity: from assisting sexual-reproduction cycles to rearing the next generation of coral to resilience testing, asexual fragmentation with scaled-up outplanting and extensive monitoring. The new nursery in Key Largo allows Mote to continue to scale up these successful restoration efforts by growing even more coral.