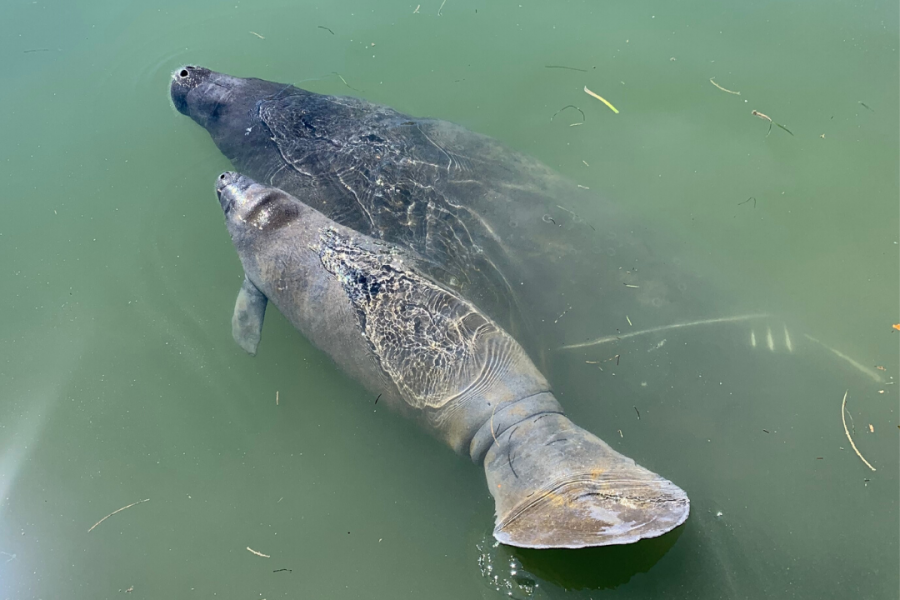 Read Mote's update on the rescue below, and visit this link for a photo gallery by the Sarasota Herald-Tribune.

It was a very exciting day at Mote Marine Laboratory & Aquarium! The Florida Fish and Wildlife Conservation Commission (FWC), SeaWorld Orlando and Mote came together to release a manatee and her calf into Sarasota Bay. The female manatee was rescued by Mote staff, FWC, and other partners on Mother’s Day weekend, and later gave birth to a male calf at SeaWorld Orlando.

Watch and read more below!

On May 9, Mote's Stranding Investigations Program and the Sarasota Police Department responded to a call about a distressed manatee along the bayside of Siesta Key and confirmed the manatee was in distress. The manatee was exhibiting abnormal behavior, including not being able to dive properly, and had both fresh and healed boat-strike wounds.

After Mote’s initial response, FWC led a rescue effort, as additional trained responders from Mote, Sarasota Police Department, and Sarasota County Sheriff’s Office descended upon the scene to assist the manatee. The manatee was safely netted onto a boat, transferred into a transport truck and taken for rehabilitation at SeaWorld Orlando. During the veterinarian exam at SeaWorld Orlando, the animal was found to be pregnant, and on Tuesday, May 11, the manatee gave birth to a healthy male calf. SeaWorld staff nicknamed the mother "Siesta" and the calf "Key." SeaWorld’s team of manatee rehabilitation experts provided the care needed to bring the mom back to a healthy state. Read more about the rescue efforts here.

Earlier this morning, SeaWorld Orlando transported both the manatee and its calf to Sarasota, where a large team from FWC and Mote were waiting to assist with the release near Mote’s campus. Upon arrival, the team lifted both manatees out of the truck and onto the ground to take updated identification photos for the mother and new photos of the calf, as well as give the last round of necessary medical care. The photos are used to identify an animal over time by the unique pattern of scars on a manatee’s back. The team then proceeded to lift the animals and release them into the water together.

The release of both mother and calf demonstrates the successful partnership and collaboration between various organizations that are all dedicated to protecting and saving our marine life.

It’s important to remember that successful rescue and rehabilitation stories are not possible without help from the public. This manatee was originally reported by a citizen, which allowed trained responders to spring into action.